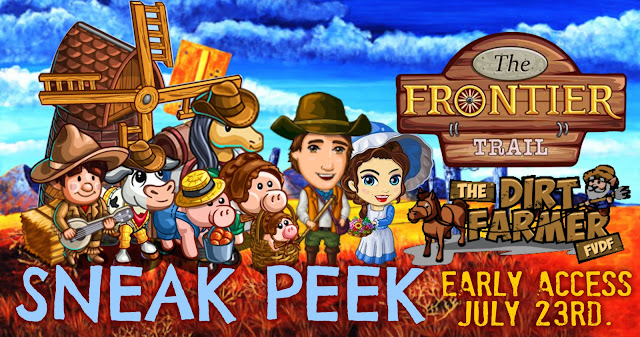 Hello Farmers!! Welcome to America! Farmville The Frontier Trail Farm EARLY ACCESS is on JULY 23RD. Here is a SNEAK PEEK of this NEW FARM. Please share with your friends and stay tuned for more updates!

The "Frontier" is defined as "a region at the edge of a settled area". The "American Frontier," began when Jamestown, Virginia was settled by the English in 1607. In the earliest day of European settlement of the Atlantic coast, down to about 1680, the frontier was essentially any part of the interior of the continent beyond the fringe of existing settlements along the Atlantic coast and the eastern rivers. The "American Frontier" ended with the admission of the last mainland territories as states in 1912 (Google)

During the 1700-1800s American Pioneers migrated westward by the thousands in search of opportunity and inexpensive land. There were doctors, blacksmiths, ministers, shop owners, lawyers, veterinarians and many others. They went to Oregon, Texas, and other areas of the frontier for the land. This land was available for homesteading and much of it was free or very cheap. The Farmland was rich and fertile.

The gateway to the West was out of the town of Independence, Missouri. These brave Pioneers traveled in Wagon Trains thru the Prairie and over the mountains. Their path followed the Wagon Trails such as the California Trail and the Oregon Trail. The journey would take months and was often treacherous due to wild animals, sickness, roving bands of criminals, and hostile Indians.

On this new Farmville farm THE FRONTIER TRAIL we will see all types of items related to the "American Frontier" history. Animals such as the Bombardier Bear, the Admiral Deer and the Red Coat Deer represent several military ranks in the British Army. Items like the Frontier Rangers describe the U.S. Army Ranger's history preceeding the Revolutionary War.

Additional evidence of colonial/revolutionary war presence on this farm is the Colonial Night Cap Tree, the Big Cat Commander Lion, the Colonial Bread Factory and the Colonist Captain. Also we will find a long list of animals and trees representing the Native Americans who lived in the prairies before the pioneers arrived like the Cherokees, Navajos, Mohawks and Oneidas. Examples are the Walrus Navajo, the Mohawk Bison, the Cherokee Warrior Pegasus and the Wampun Tree (the wampum contains the Oneidas ancestors).

The Old West is back in this farm with items like the Cowboy Boot Palmtree and the Old West Bear. And finally, pioneers and the pioneers life will be seen all across the farm with many items including the Pioneers Wind mill and the Pioneers Lake Cabin.

For our own "American Frontier" themed Farmville farm THE FRONTIER TRAIL, our new characters will be: Carmela Redinger, John Hardy, Booker Hardy and Myrtle Redinger. 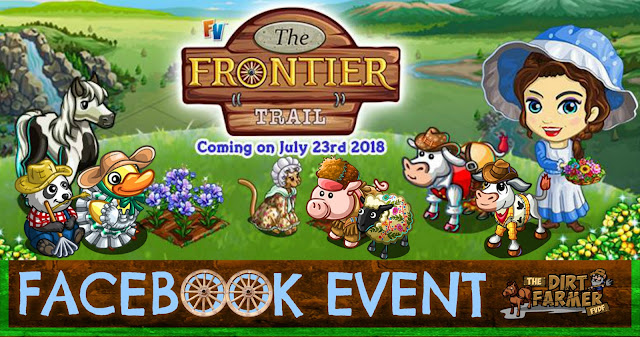