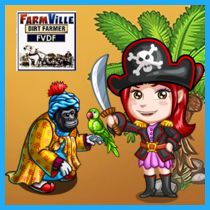 Starts April 16th – Cap’n Zelda is BACK! With lots of pirate booty! This time she has treasures from the fabled lands of Persia. Farmville is getting ready to launch a new spin on the familiar Wandering Pirate map unlock feature! This time it will be called Arabian Nights! Similar to Trick Or Treat, Saving Seaboo and Puppy Come Home, we will be crafting and collecting Travellers Gold to unlock Nomads Chests (Wooden, Bronze, Silver and Gold) for animal rewards and a lone deco... If you complete all 4 chests you will earn a second deco, a NOMAD’S STALL as a bonus reward. Check out the details below and please do share…. 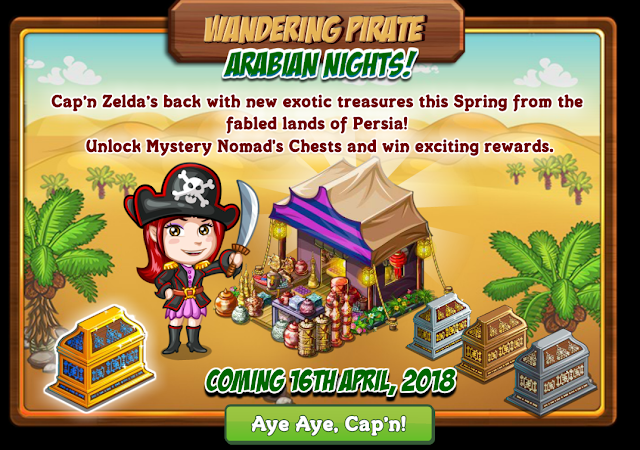 A look at the pop-up we will get when the feature goes live on our farms. 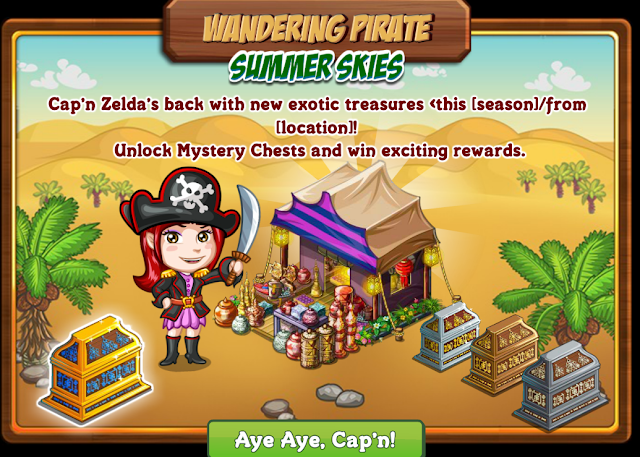 This feature will have ALL NEW REWARDS. There will be 16 BRAND NEW rewards, a tree, 3 decorations and 12 animals to win across the four areas of the map. If we complete all four and win all 16 rewards, we will also win a fourth decoration, THE NOMAD’S STALL as a 17th bonus prize.

Just like the Pirate Ruby in the Wandering Pirate, you will be able to find Zelda’s’s icon for the feature at the outside edge of your farms.
You will need to lure the animals with Traveller’s Gold (Which appears to also be referred to as “Nomad’s Gold” in some post click confirmation screens). You will be able to obtain Traveler’s Gold by posting to the feed, collecting from friends posts, crafting them or purchasing with farm cash. Several options for every taste. There will be a countdown timer within the feature to let you know how long you have left to complete it. You will be able to collect up to 12 Traveler’s Gold per day from friends posts, and post every 6 hours for 5, yielding up to 32 per day from the feed. Please note that players often report being stopped before 12, and if someone who has hit their limit clicks your post, not only will they not get one, you will not get one, and it may count the click so you ultimately get one less from that post.

When the Arabian Nights feature goes live on our farms, as usual Cap’n Zelda will give us a walkthrough, before showing us the interface. 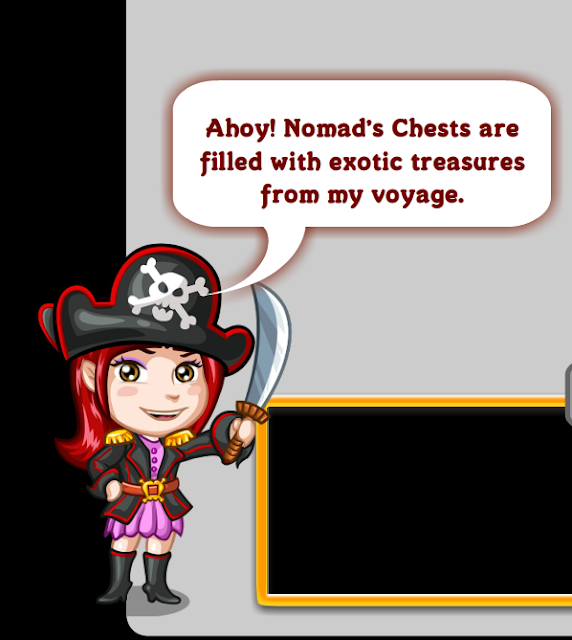 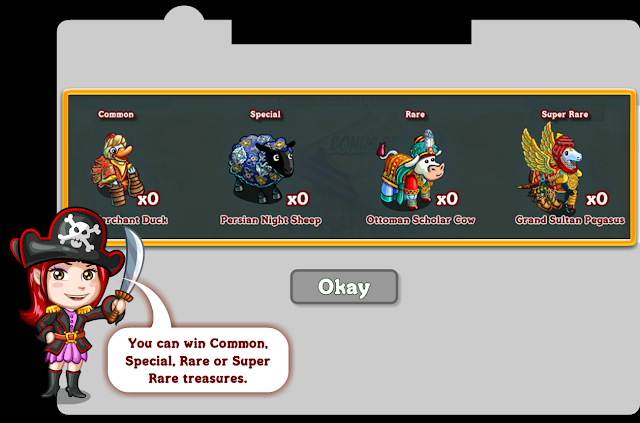 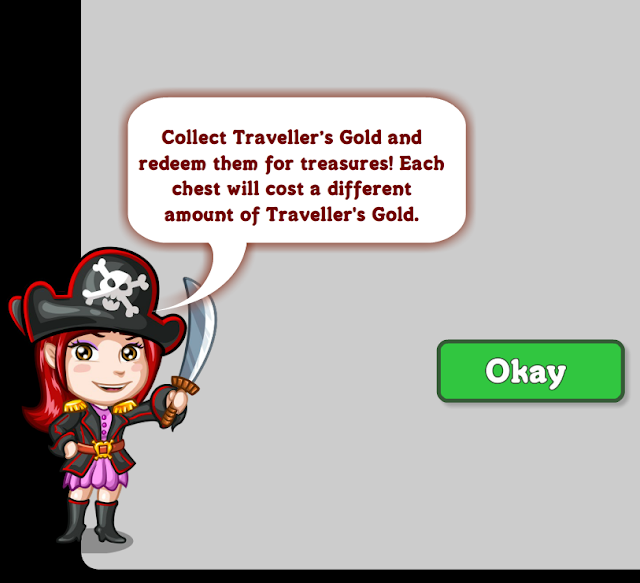 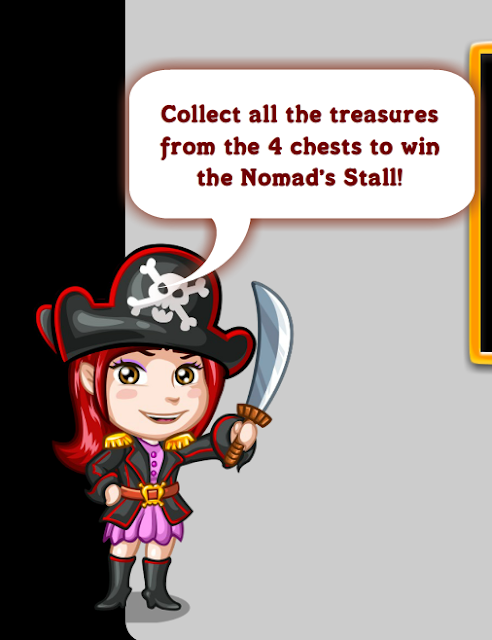 Here is a sneak peak at the 4 NOMAD”S CHESTS contained in the feature where we will be helping Zelda corral the animals and finding fabulous rewards.

To locate the feature, once live, simply locate the Cap’n Zelda icon on the right side of your farm screen,

or look for the Nomad’s Stall to the left of the game board. 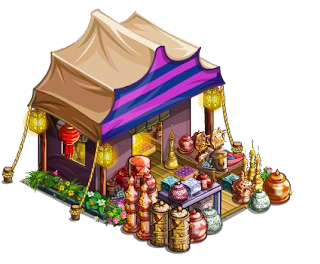 A look at the crafts that are associated with this feature. The Traveller’s Gold . Similar to several prior all farm and farm specific features, it looks as if there will be 3 different Traveller’s Gold  recipes, one for 1 Gold, 1 for 3 Gold and one for 5 Gold

As usual there are three new crops associated with the recipes. While planning, keep in mind that new crops with zero mastery will give significantly less bushels than fully mastered crops. Perhaps choose a larger farm for those crops, keep an eye on the bushel report and make sure to plant enough to get the bushels that you need. Here is a look at the new crops and their bushels.

As with Wandering Pirate, The Arabian Nights Feature will have 4 different set of rewards.   Each set will have a common, a special, a rare and a super rare reward which you will be able to redeem for a certain amount of Traveller’s Gold.  Below you can find the set of rewards listed according to the amount of Traveller’s Gold you will be needing for a try at each set. This feature is random, you will get duplicates, but usually not more than 2 per animal before completing a set.

Now  the bonus prize for unlocking all of the chests – you will get to keep Cap’n Zelda’s Nomad’s Stall! 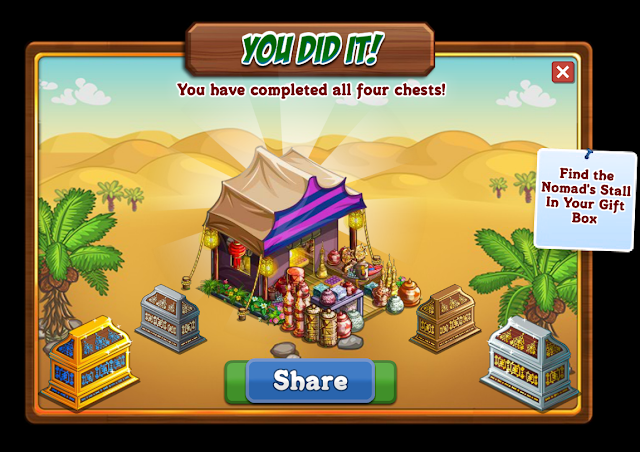 That's all we have for now.  Please remember to visit farmvilledirt.com often, and share our posts with your friends!