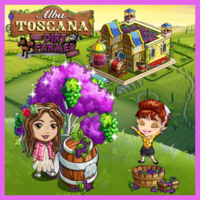 Starts January 15th - The FarmVille Studio has some ‘splainin to do! With the all new Alba Toscana farm being released on January 15th, its GRAPE ESCAPE main feature will be arriving too. We’ll be doing tasks and stomping grapes to earn daily rewards and a building that harvests for consumables until March 12th! Guided by a character who looks suspiciously like “I Love Lucy” era Lucille Ball, your Dirt Farmer team has the scoop on how to fill those meters and complete the feature. This post will give you an OVERVIEW of the Grape Escape and , a post on tasks and a post with the daily rewards. Read on for details and please do share….


For tasks to earn points in this feature click here.

A look at the loading screens associated with this feature. 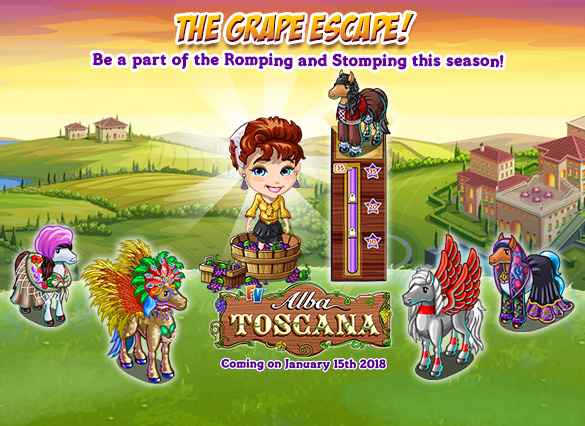 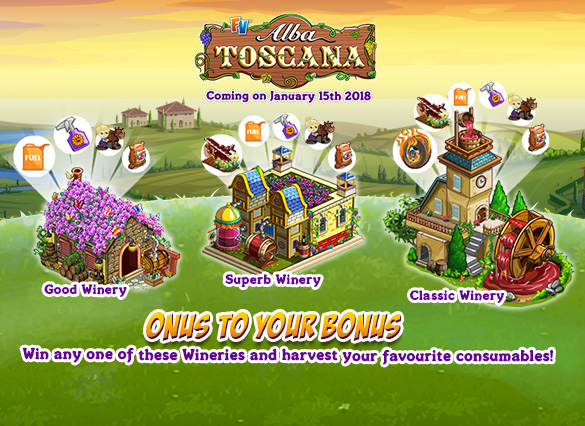 You can access the feature via the Lucy looking character at the back of your farm beside the  Tuscan Grannary Unwither Ring Gift Building .

or the icon on the right side of your farm.

The daily timer will restart at the normal market update time. There is a real time countdown and reminder of which feature day we are currently on  in upper left of feature. 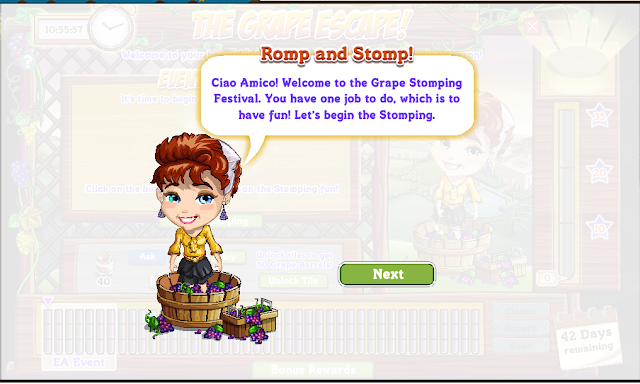 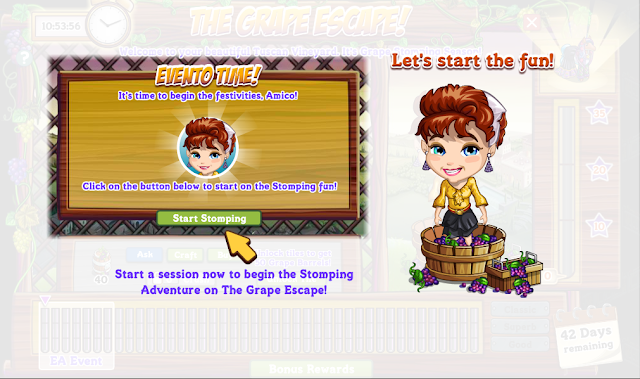 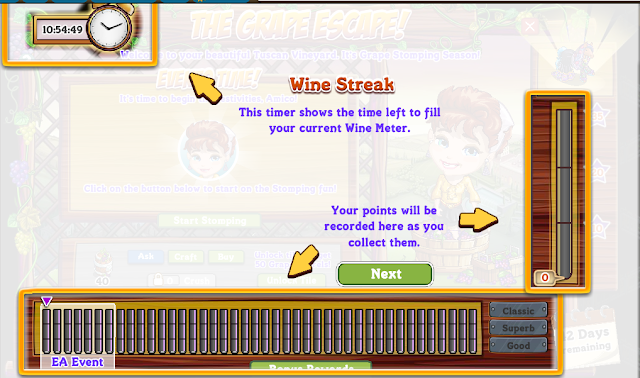 You will fill your meter each day by doing a variety of TASKS .  Click here to view them. 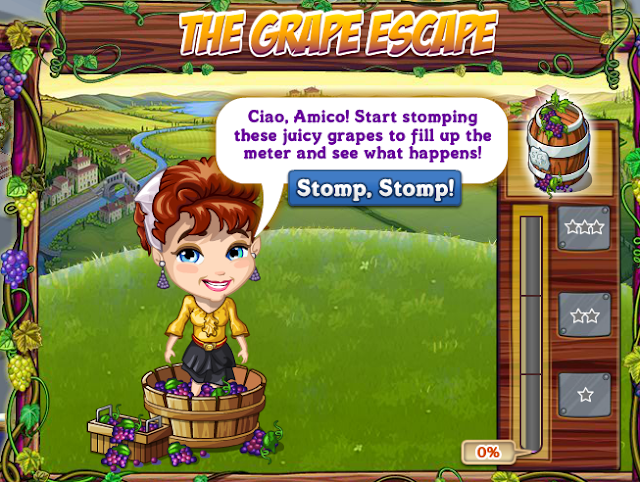 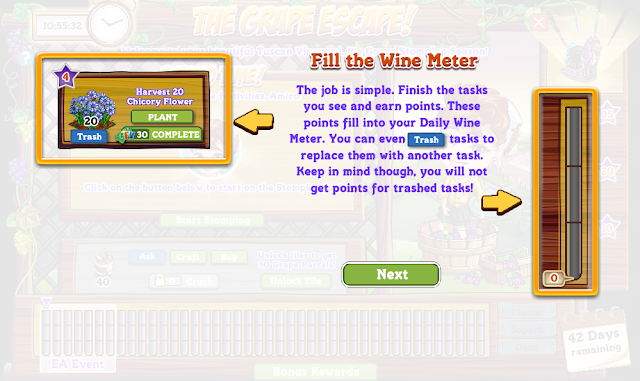 If you do not care for a particular task you can TRASH it as with the prior Pot of Gold feature on isle of Dreams. 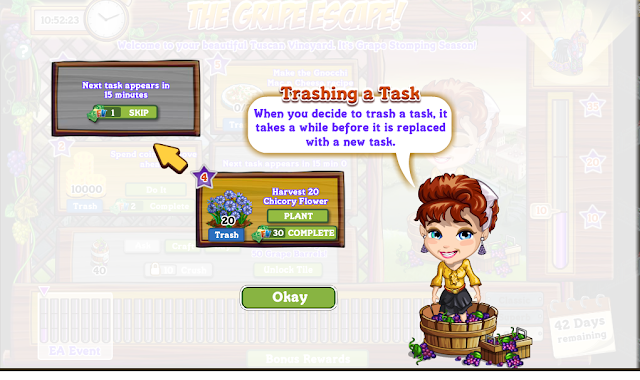 To Trash as Task, click on the Trash button 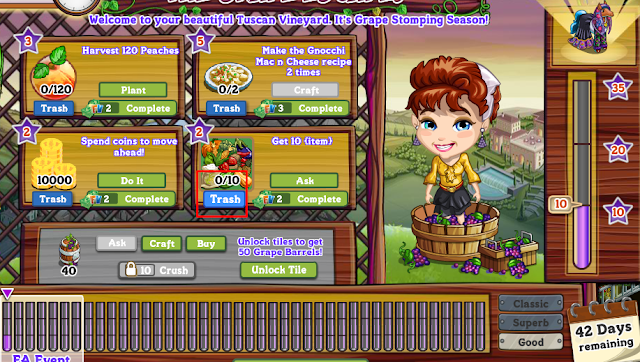 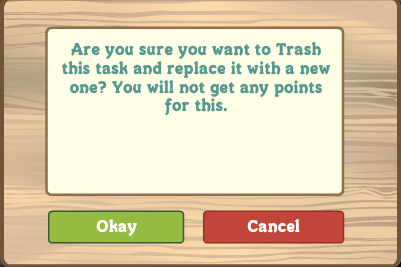 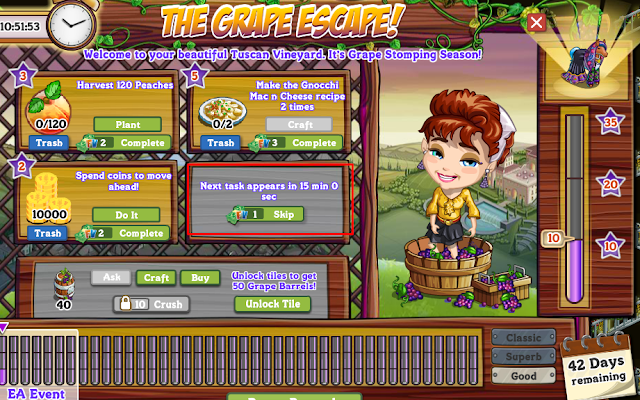 to view thewaiting period  time remaining on a trashed task, you must close and reopen the feature.

It does not count down in real time like the daily timer does. 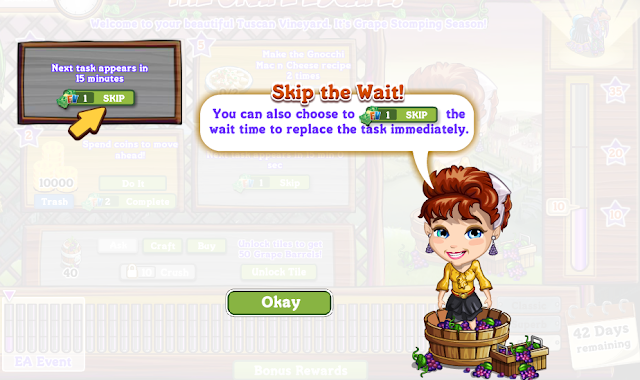 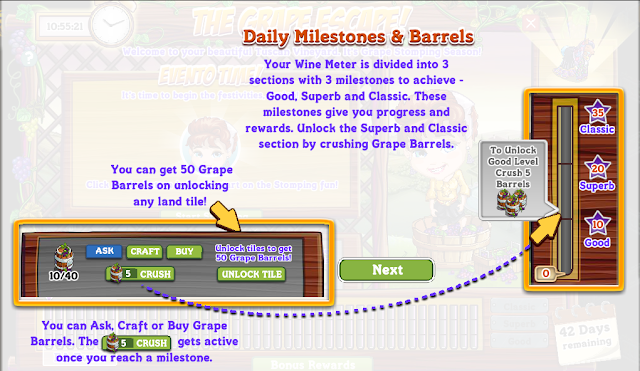 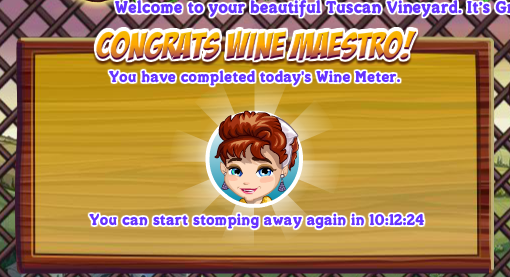 You will be able to obtain grape barrels via the usual post give and get method with 5 per post appearing to be the helper limit, and around 10 per day.
You will obtain 50 grape barrels for every land tile you unlock or purchase
As usual, you can buy them for Farm Cash

If you purchase Early Access, you will be awarded 40 free Grape Barrels 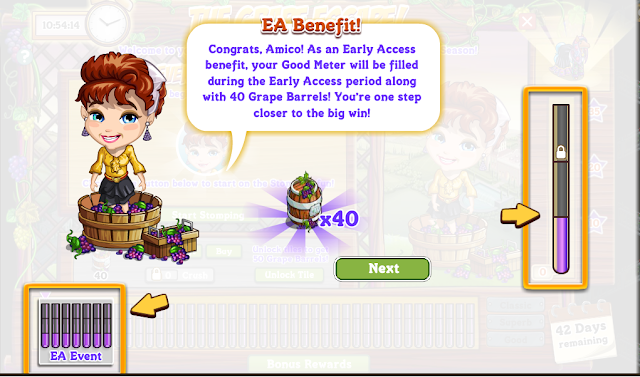 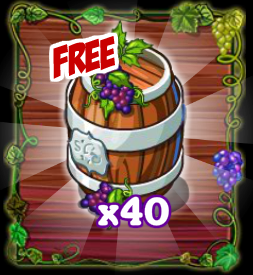 in addition to the 10 pre-filled points on the meter for the first 7 days. 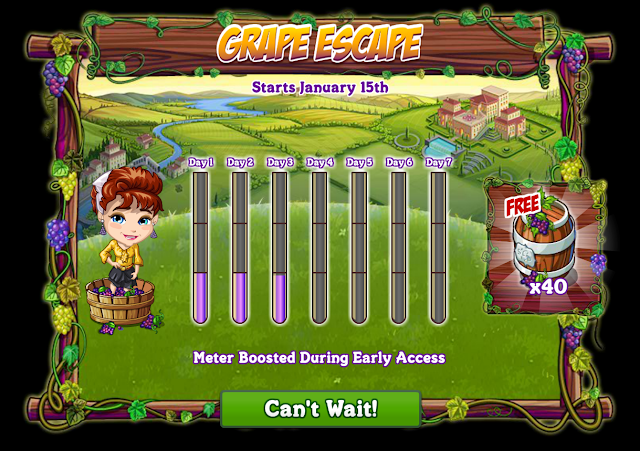 This is helpful, as if you wish the rewards for the day, you will need to fill the meter to the full 35 points 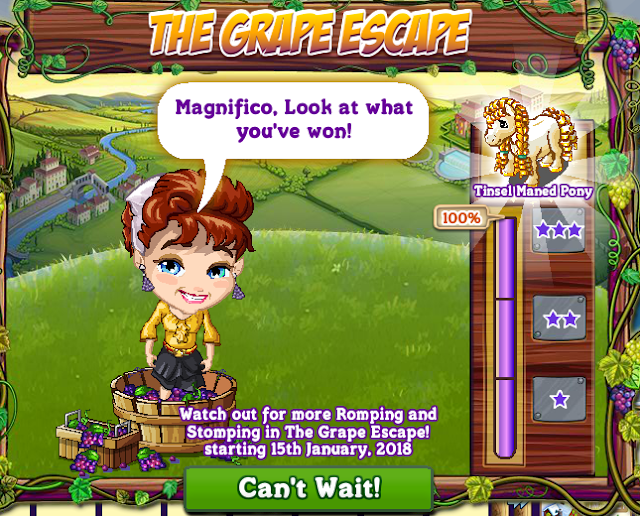 and in a rather helpful turn of events you can craft them in increments of 1, 3 and 5.

There are rewards associated with every day's meter and the final winery reward at the end. Click here to view them.

You will also receive a pop-up at the beginning of the feature that indicates which consumables you have a chance of winning from each 2 week harvestable building, so you can decide which to pursue. 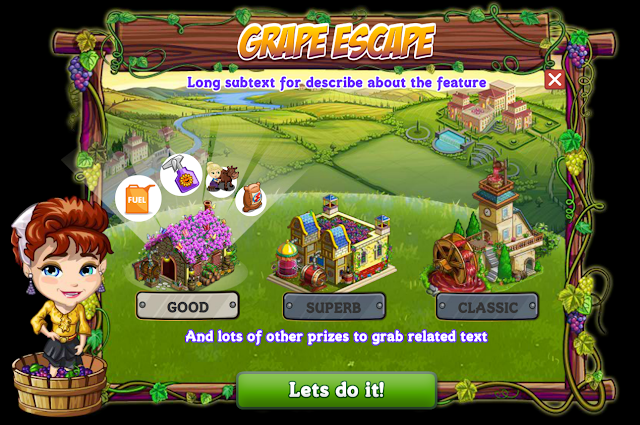 Note that the middle winery is called superb in some places and better in others. 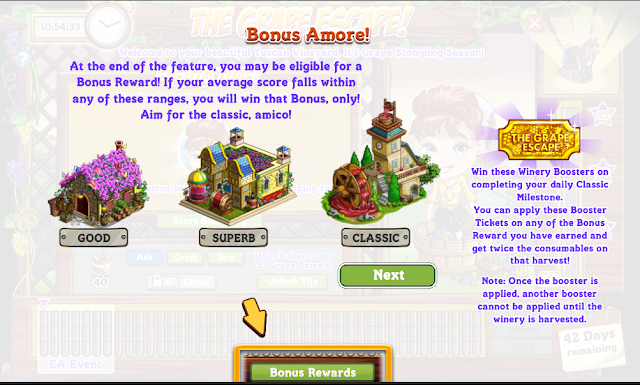 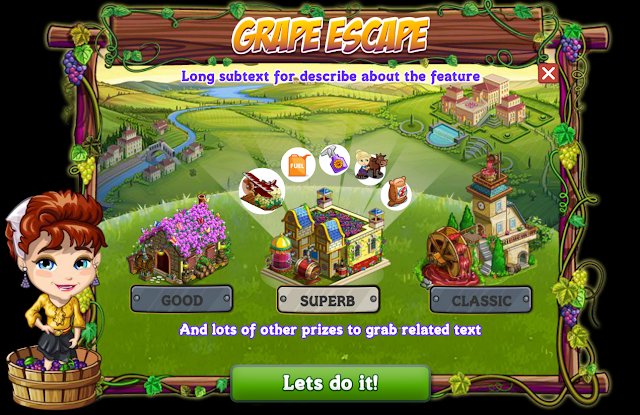 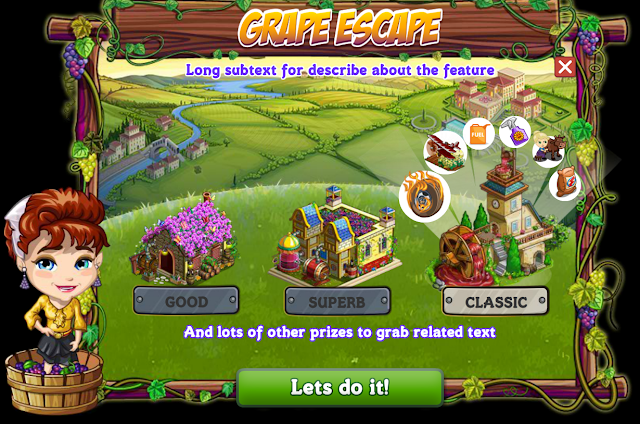 When the initial task-driven part of the feature completes on the 26th of February, you will be notified which level of consumable building you have won. 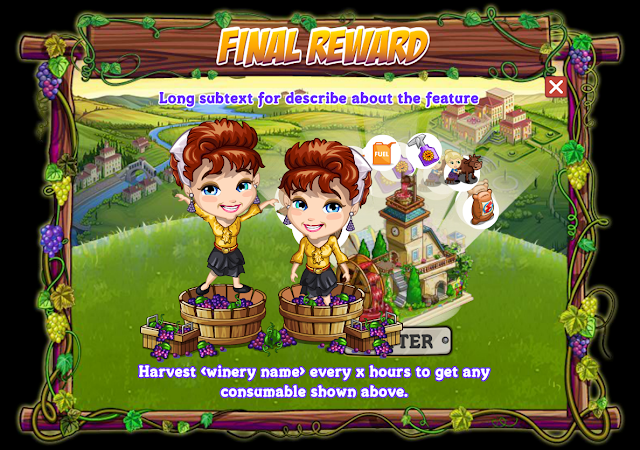 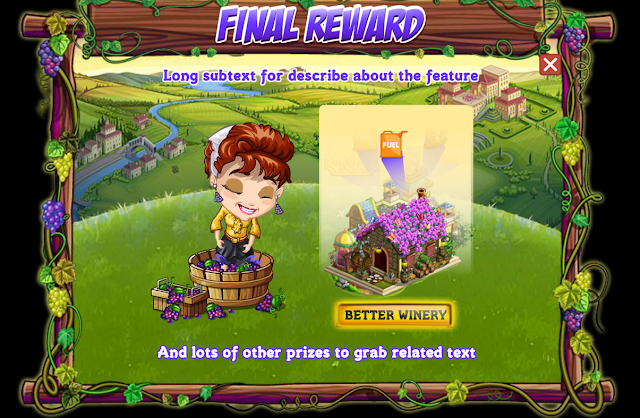