Poll Of The Week

New farms keep coming, every 6 to 8 weeks, and FarmVille is set to release it’s latest iteration of a Halloween farm , this time it’s called Shadow Creek.

Early Access starts on October 16, 2017, with general access starting a week later.  Papa Dirt was wondering if you have a spooktacular time with all the Halloween farms, or if you wish for something different.

Farmers who purchase Early Access to Shadow Creek for 45 FC will get bonuses including, but not limited to building parts, animals, special crops (we still need to verify this information) , and avatar costumes, like they have received in the past.

If you enjoy new farms, this purchase continues to be a great deal.

However, many farmers have been experiencing posting problems caused by Facebook which make it almost impossible to play certain aspects of the game and Papa Dirt and the entire Dirt Farmer Family have noticed how frustrated people are getting with the pace of new farm releases.

So Papa Dirt would like you to vote in his poll, and then comment here in our  help group ASK the Dirt Farmer.  Do you plan on purchasing Early Access for the FarmVille Shadow Creek Farm?  Please tell us why you voted as you did, remember that we have members of the FarmVille Studio in all of our DIRT FARMER groups, and by voting and commenting, your voice can be heard.


The Dirt Farmer wants to know: Will you be purchasing Early Access for the FarmVille Shadow Creek farm when it goes live October 16, 2017 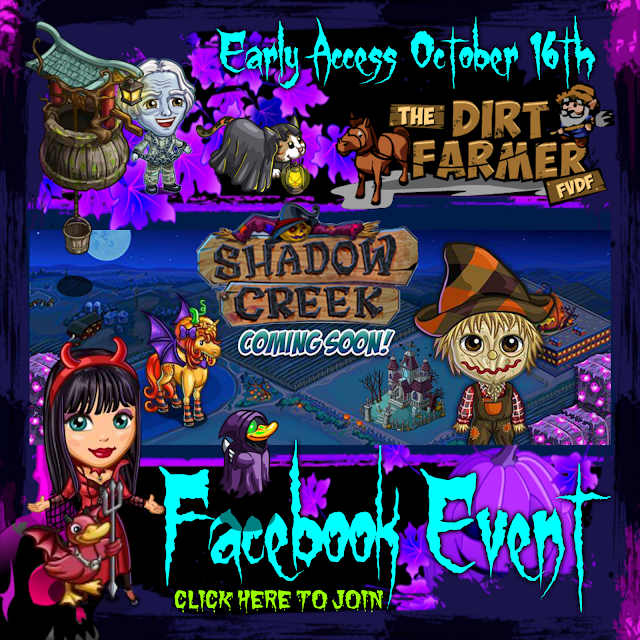 Want a sneak peek at the Shadow Creek?
Click here for our information!

That’s all we have for now, and please remember to visit farmvilledirt.com
frequently for the latest Farmville news!