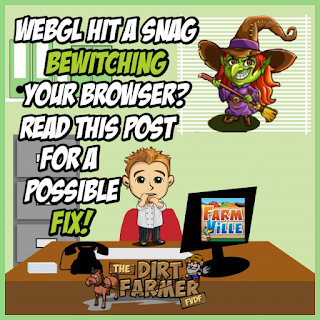 Has your Google Chrome browser been freezing when playing FarmVille or elsewhere on the web, with an annoying bar that says 'WebGL has hit a Snag" with buttons to refresh or reload? Your Dirt Farmer team has been looking into this issue and we found several possible fixes. While they may not work for everyone, they are worth a try in case they can relieve the frustration. Please do share...

Ugh, it happened again! What the heck is WebGL anyway?

Well lets go to the Khronos group for the answer

"WebGL is a cross-platform, royalty-free web standard for a low-level 3D graphics API"

So what does that mean in English anyway? Basically WebGL  lets you see 3D images in your browser without a plugin. It is  integrated into and developed in partnership with,  many browsers including Chrome, Firefox and Opera.

So do I need this annoying thing anyway?

Essentially no, not for Farmville, though if you play other games with more intensive 3D graphics, not using WebGL may impact your experience.

So why is this happening now? Is it a conspiracy? Did the FarmVille Studio do it?  If I put on my tinfoil hat will it all go away?

Well no not really.

According to Engaget, Chrome has recently updated to WebGL 2.0. Anything new, never seems to go smoothly....

"Did you recently notice a boost to 3D web graphics while using Chrome? It's not just you. Google has revealed that Chrome 56 and later releases support the WebGL 2.0 standard. You should see faster performance, new texture types and visual effects (such as volume-based effects and tone mapping). And importantly, it's now on par with the same OpenGL ES 3 spec you see in newer mobile games -- it might now be possible to port your favorite phone title to Chrome without losing graphical detail.
You should see the upgrade in all desktop versions of the browser. Android, meanwhile, is "coming soon." This isn't a completely new development when Firefox and Opera also have WebGL 2.0 support. However, Chrome's considerably larger usage share (58.5 percent as of February, according to Net Market Share) makes this a big deal. It not only increases the chances that you can see this next-level 3D on the web, but gives creators a stronger incentive to take advantage of that extra visual prowess."

Cool - so how do I  turn it off and stop the madness?

Scroll down the page and find WebGL and simply use the drop down menu to DISABLE it.

That will stop WebGL from hitting snags, because it won't be running.

But WAIT! What if I need WebGL for other stuff?

Well, since it is essentially the browser running out of memory for all the things it does, you can also make sure hardware acceleration is enabled.

You do this by right clicking somewhere in the game screen and clicking settings.

Then make sure the box is ticked.

This allows Windows to use portions of your hard drive as extra memory. Be awate that this may slow down your game. If you find it intolerable, simply click on settings again and untick the box to disable it.

You can also go back to Chrome://flags

and adjust your WebGL settings to enabled or disabled, whichever best suits what you are currently doing.