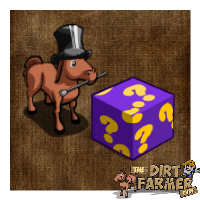 Do you remember the Mystery Gift Feature from way back in the early days of Farmville?

For example...The High Kick Horse, The White Stallion and The Black Stallion foals were locked against GROWING them for FVCash

It seems this is no longer the case 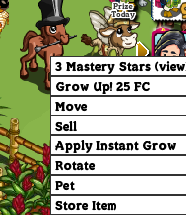 This may not be a BIG DEAL for most...But, the horse breeders in the game may be excited at this news.

Unless you were one of the few that were able to WIN one of these very very rare critters in the Purple Box Mystery Game. Then you just had to do without...and you had to be content that your Horse Collection was incomplete. 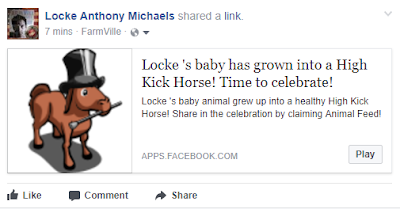 We do know that the White Stallion and the Black Stallion were also in this CLASS of Horse...coded MGE for Mystery Game Exclusive.
Rightfully so...Considering the EXTREMES that some went to in order to obtain one of these.

You had to BUY that Purple Box for 25FV$ and you really didn't know what you would get.

The Purple Box was only with us for a short time and was replaced with the Mystery Dart Game in July of 2010...We are unsure what other RARE CRITTERS may have also been UNLOCKED.

Other horses that were originally marked as Mystery Game Exclusive and unable to be grown include: The Brown Pony...The White Stallion...The Black Stallion...A Donkey...The Purple Mane Pony.

If you remember any rewards that were previously LOCKED and unable to grow...Please let us know