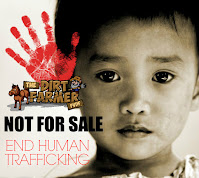 The Dirt Farmer Foundation is our way of focusing the social media power of the Dirt Farmer’s community to help worthwhile charities.
Our CAUSE it’s JULY or Cause of the Month is:
***END HUMAN TRAFFICKING***

Trafficking in persons is a serious crime and a grave violation of human rights. Every year, thousands of men, women and children fall into the hands of traffickers, in their own countries and abroad. Almost every country in the world is affected by trafficking, whether as a country of origin, transit or destination for victims.

Trafficking in Persons is the recruitment, transportation, transfer, harbouring or receipt of persons, by means of the threat or use of force or other forms of coercion, of abduction, of fraud, of deception, of the abuse of power or of a position of vulnerability or of the giving or receiving of payments or benefits to achieve the consent of a person having control over another person, for the purpose of exploitation. Exploitation shall include, at a minimum, the exploitation of the prostitution of others or other forms of sexual exploitation, forced labour or services, slavery or practices similar to slavery, servitude or the removal of organs. Learn more HERE.

People may be also considered trafficking victims regardless of were transported to the exploitative situation, previously consented to work for a trafficker, or participated in a crime as a direct result of being trafficked.

Human trafficking comes in many forms: Sex Trafficking, Child Sex Trafficking, Labor Trafficking, Domestic Servitude, Forced Child Labor, Use of Child Soldiers, Bonded Labor or Debt Bondage. All experienced across the globe, with experts estimating that at least 21 million are victimized worldwide, with some estimates as high as 45 million. Learn more HERE.

A widespread shift in cultural understanding of trafficking has helped the movement continue to grow into a national outcry of advocacy for new laws, better prosecution of perpetrators, ending demand and caring for survivors.

According to national leaders from organizations like Polaris, Shared Hope International and Love146, 2016 was a year of growth in the movement, leading to momentum the organizations hope will continue bringing justice to survivors everywhere in 2017 and beyond. Learn more HERE.

Be a conscientious and informed consumer. Discover your slavery footprint, ask who picked your tomatoes or made your clothes, or check out the Department of Labor’s List of Goods Produced by Child Labor or Forced Labor. Encourage companies to take steps to investigate and prevent human trafficking in their supply chains and publish the information for consumer awareness. Meet with and/or write to your local, state, and federal government representatives to let them know you care about combating human trafficking, and ask what they are doing to address it.

Volunteer and support anti-trafficking efforts in your community. Organize a fundraiser and donate the proceeds to an anti-trafficking organization. Encourage your local schools to partner with students and include modern slavery in their curricula. As a parent, educator, or school administrator, be aware of how traffickers target school-aged children. Be well-informed. Set up a web alert to receive current human trafficking news. Become familiar with public awareness materials available from the Department of Health and Human Services or the Department of Homeland Security.

ORGANIZATIONS AND CHARITIES YOU CAN SUPPORT. There are also more people working to end human trafficking and modern-day slavery than ever before. Few of these organizations are large or well-known—rather, they work from the grassroots level, promoting awareness and advocating for change in the communities they’re needed most. These groups confront traffickers, criminal gangs, and broken systems in order to make a difference. They use their resources to take a stand and serve as a voice for those who are exploited and held against their will. Each organization has a different strategy, but all of them, little by little, are making major strides in ending human trafficking. Read on to learn about a few organizations that are fighting to ensure freedom for all.

Trafficking Policy and Advocacy: Polaris Project. One of the most influential groups working on the issue in the United States, the Polaris Project takes a comprehensive approach to ending modern-day slavery. The organization advocates for stronger federal and state laws, operates the National Human Trafficking Resource Center hotline , provides services and support for trafficking victims, and works with survivors to develop long-term strategies to ending human trafficking.

Love 146. This organization battles every day to prevent human trafficking and exploitation, provide care to survivors, and empower the ever-growing movement of anti-sex trafficking. “Love is the foundation of our motivation.”

Hope For Justice exists to bring an end to modern slavery by rescuing victims, restoring lives, and reforming society. Works in the U.S., U.K and Norway.

The Global Initiative to Fight Human Trafficking (UN.GIFT) was launched on 26 March 2007 and its mission is to mobilize state and non-state actors to eradicate human trafficking by: Reducing both the vulnerability of potential victims and the demand for exploitation in all its forms; Ensuring adequate protection and support to those who fall victim; and Supporting the prosecution of criminals involved, all the while respecting the fundamental human rights of all persons.

The Blue Campaign is the unified voice for the U.S. Department of Homeland Security’s (DHS) efforts to combat human trafficking. Working in collaboration with law enforcement, government, non-governmental and private organizations, the Blue Campaign strives to protect the basic right of freedom and to bring those who exploit human lives to justice.


Click HERE to check out ALL The Dirt Farmer Foundation MONTH CAUSES & CAMPAIGNS since 2012, including our Help Bring Home Missing Kids Month Cause.