Recently, a lot of farmers noticed that harvesting on Turtle Rock, the 3rd terrain of the Legend of Tengguan farm caused them to get a whoa farmer and have to reload. The Dirt Farmer team looked into the matter and determined that regular vehicles no longer worked, and that in order to prevent this issue, farmers had to use the specially designed Turtle Rock vehicles. This has led many farmers to ask, why the change? What was Farmville thinking? Many have come to the conclusion that Farmville was just making things harder, but is that the case? In this post we discuss what led to the change and the reasons behind it. So let’s dive right in to the details of this situation, and remember to share with friends if you find the post helpful.

To figure out how we got into this mess we have to go back a couple of farms, to the Once Upon A Winter Farm. As many may recall, this was the last farm to have the controversial third terrain, the Icy Tarn. What players might not remember off hand, is the particular issue that upset many players: vehicles. In the case of the Icy Tarn, the players were upset that there were no coin vehicles available to use on the Icy Tarn. This is understandable, as planting by hand can be strenuous for many due to disability or other limiting factors, and tedious for others due to how much time it takes to plant by hand versus by vehicle. Many players flooded our question and answer group, Ask The Dirt Farmer, conveying their frustration at the lack of vehicle options for the Icy Tarn. As always with issues important to players, your Dirt Farmer team presented the problem to the Farmville studio and encouraged them to provide the players with coin vehicles to alleviate the aggravation. While the response was slow, Farmville did eventually come through, and coin vehicles were released, to the relief of many players.

Which brings us to Legend of Tengguan and it’s 3rd terrain Turtle Rock. Once the Dirt Farmer team became aware of the possibility of another farm with a 3rd terrain, we made sure to remind the studio of the uproar from the previous 3rd terrain regarding vehicles. We asked that they be sure to include a set of coin vehicles for the upcoming Turtle Rock, to make sure that farmers didn’t experience the same frustration. Ultimately, The Farmville Studio followed our advice in an unexpected direction. They attempted to make things simpler for everyone, and make all vehicles work on Turtle Rock. Unfortunately, despite their good intentions, this led to an unforeseen bug. Many may recall that players experienced a problem when planting on the Tengguan farm where their crops wouldn’t display information properly when the cursor was hovered over it. Normally you would see this:

However, when players would plant on the Legend of Tengguan, many of them would see this:

This issue was reported to the studio, and after a little investigation on our end, we determined it was likely only occurring if farmers replanted on Turtle Rock first, out of the 3 terrains on Legend of Tengguan. The studio saw the report, investigated the bug, and informed us a fix would be coming. At the time we weren’t aware of what the fix would be, so initially, we were just as surprised as players when the Turtle Rock coin vehicles appeared and players started getting a whoa farmer when harvesting. Once we did a little checking, we were able to connect the two issues, and began informing players to purchase the coin vehicles to use on Turtle Rock to prevent receiving the whoa farmer. Upon further checking, we discovered the issue with the crops not displaying info was cleared up at the same time, allowing us to connect that issue with what was going on. To find these vehicles in the market, open the market, go to the Farm Aides section, and look under vehicles. As you can see below, the Turtle Rock vehicles are for coins, and say Turtle Rock on the market display: 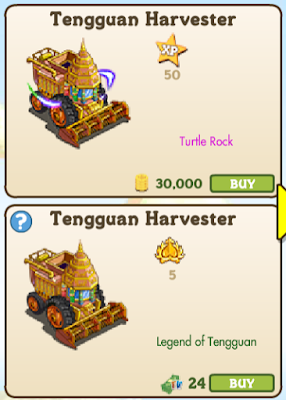 Many have wondered since the coin vehicles on Turtle Rock came out, why The Farmville Studio would change something so long after release, and after looking into it, we can inform you that what Farmville did to allow all vehicles to work on Turtle Rock inadvertently caused the bug described above with crop information displays, and in order to fix it, they unfortunately had to remove this ability for all vehicles and go ahead and release the Turtle Rock coin vehicles. Ultimately, Farmville was trying to make things easier for all, and it didn’t work out quite as planned. Thankfully, for this farm, we didn’t have to wait on the coin vehicles once they disabled the other ones. Unfortunately, players still experienced much frustration because of a lack of communication on The Farmville Studio's part, since it took time for many, including The Dirt Farmer team, to figure out what was going on and provide a solution to the whoa farmer issue on Turtle Rock. Even now, some players may be unaware of what’s happening and still be experiencing the whoa farmer issue.

Hopefully, this has answered the question that has been on many people’s minds the last few days, what was Farmville thinking? Their motives were good, but the execution left a wake of frustration. We here at the Dirt Farmer have strived to improve the communication between Farmville and the players, and have had much success, but even now there are some missteps. Rest assured we will be bringing the issue to their attention along with the frustrations you have experienced as a result.

That’s all we have for now. Stay tuned to the Dirt Farmer for all the latest Farmville news and info.