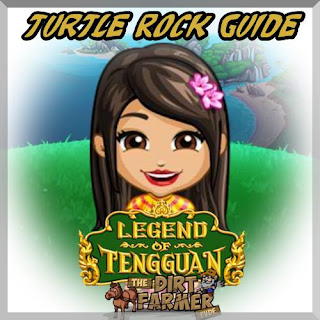 On May 8th, 2017, the FarmVille Studio released Turtle Rock - the second region of the Legend of Tengguan farm. What can we expect from this region?.... Read below for the details your Dirt Farmer team has found. Don’t forget to leave a comment letting us know what you think of Turtle Rock, or how you think it might be improved, and remember to share with friends if you find the post helpful.

Rewards will include an Ancient Starter Pack, featuring animals, building parts and a tree. Click on the name of the starter pack for full details.
Early Access players will also receive a Thai Warrior Bull and a Glowing Lotus Horse...(Please note, that at the time of this posting, no one has received the Ancient Starter Pack. The studio is aware of this and will be taking steps to fix it)
The new terrain for the Turtle Rock is know as Turtle terrain. Similar to Story of Sakura's Zen terrain, there will be animals, trees, crops, buildings and decorations that can only be placed on the Turtle Rock section. For a complete listing of those items, click here. We will be getting 8 new crops to master on Turtle Rock, listed below. None of these crops are needed for crafting, however you must master them to beat the farm:

Most, but not all of the items that can be placed on Turtle Rock can be identified by an energy bolt surrounding the item very similar to the circle that was found under Zen Terrain items on Story of Sakura. You can find an example below:

Vehicles and unwither rings should function on the new terrain

When Turtle Rock goes live, you will be granted another Home Shrine for the Elemental Harmony feature, and two new collections will be released with even more prizes. For more details on this, visit our guide.
Many farmers have wondered how to block in their avatar on this new section. There are two haybales in the new collections released with Turtle Rock (see Elemental Harmony guide above for details). For those farmers who don’t wish to wait to obtain those haybales, you can find a number of ideas in our Ask the Dirt Farmer group. Click here.


That’s all for now. Stay tuned to The Dirt Farmer for all the latest Farmville news and info