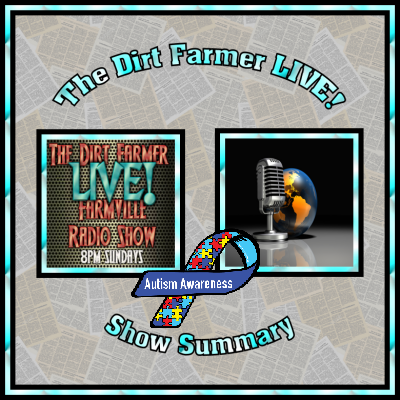 EXTRA EXTRA Read all about it!!!
Have you ever wanted to listen to the podcast, but you are unable to do so? Do you want to know what's happening in the world of Farmville? Do you need a quick reference for your quests, leaderboards, farmstands and more?  Well do we have a treat for you!! Here it is this week's EXCITING new addition of The Dirt Farmer LIVE! Show Summary!  If you enjoy reading it, please remember to share with your fellow farmers! 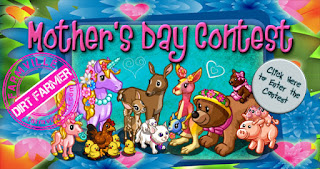 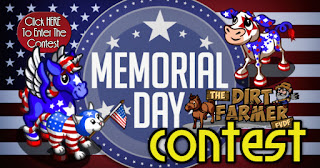 We have started doing something different with our contests here at THE DIRT FARMER.  In the past we have used Facebook and Facebook Page Posts for our contests.  Now,We are using our own website.  And to make them even more special we are doing them with just about every holiday.
Our most recent contest was our MOTHER'S DAY CONTEST.  We don't do a show on Mother's Day so we picked a winner just last night.  Terri Browning has won an UnWither Ring for her El Dorado Farm.  We usually pick at least 2 winners and our second winner is Pam Craig who has chosen a Home Farm UnWither Ring.
Be sure to comment on our next Contest that has been running all week.  Our Memorial Day Contest will run until May 28th.  That's the Sunday before Memorial Day and we will announce the winner LIVE on our show next week.
click here
***Safari Countdown***

The Farmville Safari Countdown started this past Tuesday and I am sure you are all busy collecting those Countdown Stamps
16 days of rewards with a 17th bonus prize for collecting them all.  We start out this countdown with THREE TREES again.  We have a Safari Outpost Tree. That looks like it's got Tarzan's tree house on top of it .  Then we have a Thorn Leaved Tree that really looks like something from Celestial Pastures, and finally a Compass Tree.  Then we have a Lookout Gnome, he's a peeping tom and he's hiding in the BUSH. The Safari Watch Point is a nice deco for your Savannah Safari Farm.  Next we have 2 cars.  First is a pretty cool Expedition Jeep and next we have a Leopard Print Rescue Van.  We can't tell who's driving but he has not ONE but TWO thumbs up.  There's a Traveller Pelican dressed like he's on safari.  Then 2 more vehicles, a Safari Rescue Plane and yes it is also painted in a LEOPARD PATTERN. Then we have another safari jeep this one called Cubs in Jeep because of the 2 lion cubs playing on the hood.  Now we get some critters, a Lookout Bear, an Explorer Lion, a Flare Gun Duck, a Rescue Scout Chicken, a Thirsty Elephant and a Voyager Cow.  If you are able to collect all 16 of these items you will be awarded a Cub scout Pegacorn
***Neighborhood Gifting Event***

The Third Neighbor Gifting Event for the Legend of Tengguan went LIVE this past Friday...You will be able to your neighbors a Mystic Thai Unicorn for 5FV$ each...In return for sending at least one you will be rewarded with a Pyro Gold Pegasus
***Bob’s Berry Farm*** 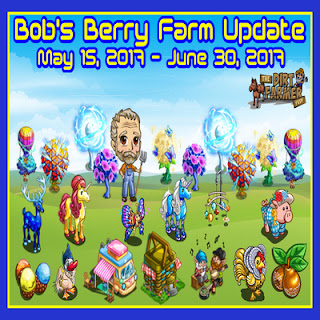 Monday saw some new content introduced into the game.  An updated Bob's Berry Farm was launched this past week.  We now have 18 new items to claim in Bob's Berry Exchange.  There is a new Crop License for the Acorn Marble Crop.  We have an Air Balloon Tree.  There's a Busker Dou which is a pair of gnome hobos street performing for cash, not a bad deco for your farm.  We have a Dark Star Dream Deer A Dusky Night Unicorn, A Golden Tail Rooster, We have a Musical Butterfly , A Night Blossom Pegasus.  There is a Party Queen Duck.  A Picnic Camper and something called a Picnic House. Now, I don't know exactly how rich you gotta be to have a Picnic House, but now I want one.  Next we have a Picnic Party Pig, A Planet Mobile which looks like an odd deco, We close out with 4 trees and a crop license.  We have a Pretty Dandelion Tree, A Rave Tree, a White Dwarf Tree, a Yellow Crown Tree and a crop license for the Starlight Pear.  Many of you may have noticed a coding Glitch with the Dark Star Dream Deer.  Your Dirt Farmer Team did alert the FV Studio on this matter and Jason tells us it was fixed.  And we can also report they are working on a similar issue with the Picnic Party Pig
***Daily Delights*** 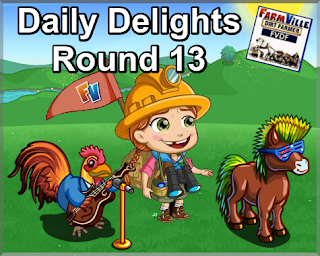 The prizes change every week, click here to see them
***BATTLEGROUND CHALLENGE WINNER*** 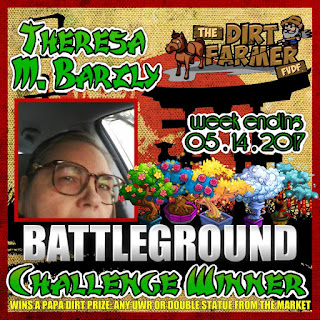 CONGRATULATIONS! to our WINNER of last Week's BATTLEGROUND Bonsai Trees Challenge (week ending 05.14.2017) Theresa M. Barzly. This Week's NEW Challenge is FAWNS. The reward for the winner of this Challenge will be a Papa Dirt Prize: your choice of ANY Unwither Ring or Double Statue from the Market. If you are not a member of the Battleground Group JOIN TODAY and invite your friends.
click here
***FARMSTAND NEWS***

The new Hawaiian Shack Farmstand starts on Tuesday, 21 days of easy peasy rewards.  We have another set of 3 trees to start us off, a Hawaii Beach Tree, a Hawaii Shade Tree, and a Tropical Hawaii Tree which is actually a pretty sweet looking PALM TREE.  Next we see the Hawaii Tropical Lovers GNOME COUPLE.  Then there is a Hawaiian Volley Ball game, these are perfect decos for your Hawaiian Paradise Farm.  The Hawaiian Life Guard is just a monkey with a surfboard.  The Traditional Hawaii Dancers are just lemurs in grass skirts. We have a reward called the Lazy Hawaiian Vacation which is some kind of critter laying out in the sun, and we have a Hawaiian Dancer Penguin, a Tourist Hawaiian Cat, a Hawaii Beauty Otter, a Pretty Tropical Koala.  We have a Hawaiian Beach Chimp, a Hawaiian Crown Seal, a Tiki Mask Tiger, a Hawaii Musician Duck, a Hawaii Maui Bear, a Hawaii Waitress Kangaroo, a Cute Hawaiian Cow, an Exotic Hawaiian Deer and finally a Hawaii Sea Pony
click here for Farmstand News
***NEW FARM NEWS***
We Can Now Confirm that our next farm will be called "Isle Of Dreams".   Early Access will be May 29th. This Farm will have a Second Region, and a Third Terrain, but at this time we do not know the Official names of Region or Terrain, but we will let you know ASAP. There will be A Special Farm Feature called Pot Of Gold, which has many different Prizes, including a Reduced Price Or Possibly Free Land Tile. The Centerpiece Buildable will be called Hall Of Elder Fairies. Unwither Ring Building- Repository of Dreams. Crafting Cottage: Fairy Shack
Self Contained: Imaginarium of Beasts.   A Big Thanks to Farmer Harry For The Heads Up On The Name Of The Farm
Yes folks...you heard right...Early access for the next farm is NEXT WEEK...The Legend of Tengguan will only be on Chapter 7 when this new farm goes live...This will REALLY upset those who just think there are WAY too many Farms...But I did a wee bit of detective work on this one...We know that we have some farms that last LONGER than others and there is usually a really good reason...The MAIN reason is to get the HALLOWEEN FARM and the CHRISTMAS FARM lined up just right...Now...Had they just continued at an 8 week pace we would have our Halloween Farm start on Halloween...and it would have run right up until Christmas Eve...Which would make Heather NIGHTMARE BEFORE CHRISTMAS Quattrone Happy...but could have ruffled a few feathers...And on that course our HOLIDAY FARM would start on Christmas Day for Early Access.
***Leaderboards*** 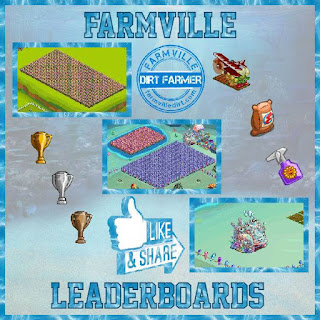 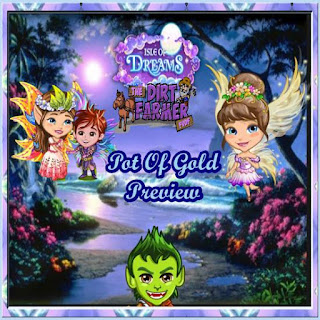 FarmVille's all new Isle of Dreams Farm will have it's own unique feature - Pot of Gold. We will be scoring points in a race to earn various rewards from consumables to building parts and ultimately free or discounted land. As was done with Dream Fish on the Opal's Kingdom farm and Elemental Harmony on Legend of Tengguan, we will be getting a prequel feature one week before release to give us a taste of what to expect.  We expect this feature to start at some time tomorrow, possibly at midnight in just a few hours.  Many of you may have noticed a pop up on the farm with a map leading to the POT of GOLD.  This did not give away much as to the nature of the feature, but there have been other clues appearing.  It seems this will be a race between a GOOD character...named Lilly...and 3 devious scoundrels named Olive, Blogin and JinJin.  The ITEM that we will all need for this feature is called the MORPH POTION.  By collecting 30 Morph Potions the week before the farm goes live. The chance to collect these will end when the farm goes live for early access. So do hurry and collect them before the 29th May.  Collecting them should also give us additional benefits for the feature. It also appears that early access players will also get extra benefits too.  We can also say that the feature will run from the 29th May until  the 19th of June and will have three milestones as you go. To reach these and earn the points needed we will have to complete a variety of tasks. These include harvesting Isle of Dreams animals and trees, upgrading the farm buildings, completing the self contained and crafting as well as the farm quests. If completed fast enough there is either discount on the Rainbows End land tile or the ability to get it for free!
*****Quest News***** 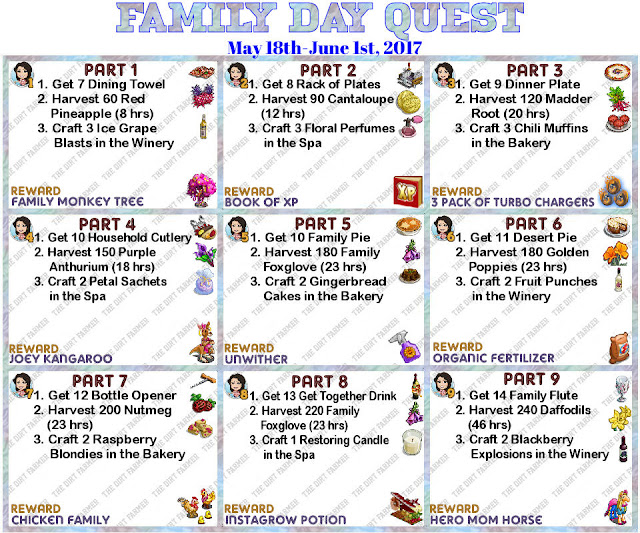 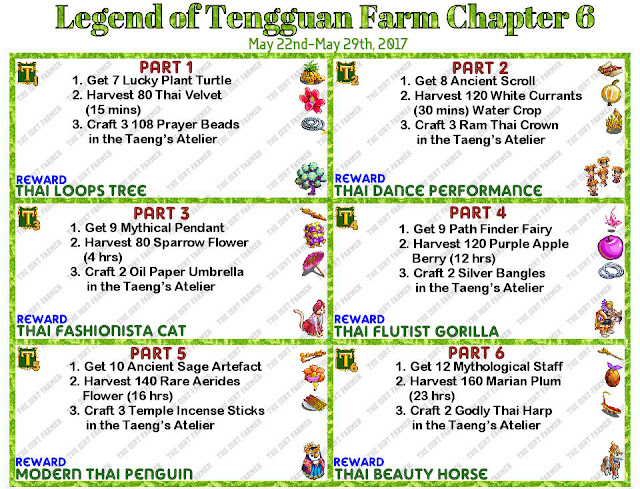 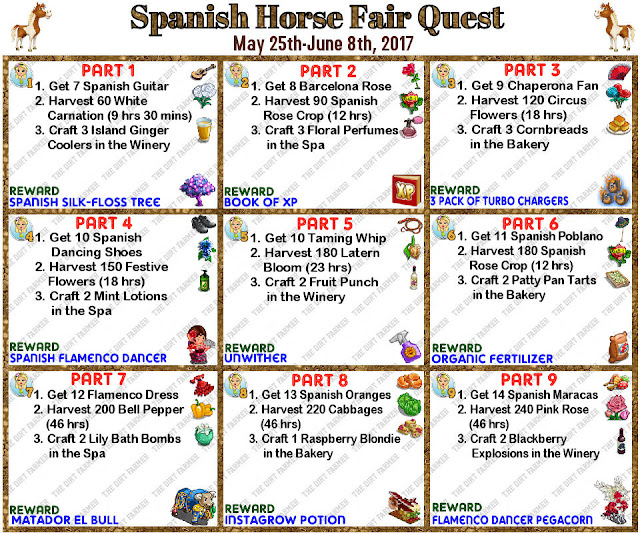 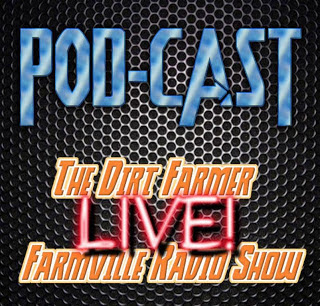 Here’s the link to this week’s podcast, because don’t you really want to listen to all of it after reading the summary?
Click here for an hour of entertaining farmville news!
We all know that playing Farmville isn't getting any easier these days. Whether Farmville is throttling  access to your friends or the  Facebook newsfeed is hiding them from you it's hard to find help links on the newsfeed.  Add that to the fact that a lot of fellow players have quit and it becomes very challenging to  find help.  That's why you should join one or all of the Dirt Farmers SHARE Groups. Mam-Maw's Trading Post, Quest Help and More, The VOTE HELP Group and GOT SHEEP are link sharing groups where you can find neat items and even get help with common FV activities.  We also have several helpful groups such as The Dirt Farmer, Farmville News Network and others! Be sure to ASK to JOIN today and please tell your FV friends about these helpful resources.
In the meantime, we hope you will visit our website as often as possible.  Your support and your clicks on that website is what enables us to provide our services to all the players. Share those posts from our Facebook page so we can reach even more players, so we can help them manage their game and stay in the game. Without YOUR support there is no Dirt Farmer.  Thanks to each and every one of you!
THE DIRT FARMER FAN PAGES, NEWS PAGES AND GROUPS


That's all we have right now, remember to always visit Ask the Dirt Farmer for up to date information and help, and enjoy the rest of your week!
Reporting live from the Dirt Farmer Studio in beautiful downtown Farmville, Dirt Farmers Michele and Karen