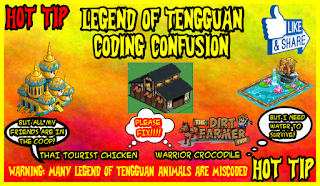 Farmers, we have some important information about some of the animals coded for the Legend of Tengguan Turtle Island expansion.  Many of these animals have been coded to be placed into the stable, and are not coded to go into their typical pen enclosures.  WE HAVE ALREADY INFORMED THE FARMVILLE STUDIO THAT THESE ANIMALS ARE MISCODED.  We are waiting for the FarmVille Studio to modify the coding in some way.

When the FarmVille Studio does fix the miscoding, any of these animals that are already placed in a stable, could lock the stable or the entire farm.

OUR CURRENT RECOMMENDATION IS TO KEEP ALL OF THESE ANIMALS IN YOUR GIFT BOX, UNTIL WE NOTIFY EVERYONE THAT THE CODING HAS BEEN FIXED.


That’s all we have for now…please visit farmvilledirt.com for all the latest FarmVille news and Happy Farming!