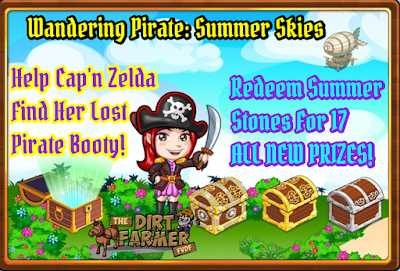 Farmville is getting ready to offer us a new version of an old and popular feature called Wandering Pirate Summer Skies.  The Wandering Pirate Summer Skies Feature will offer ALL NEW REWARDS, and the theme appears to be based on summer activities and the outdoors. Cap’n Zelda has returned home after collecting all sorts of booty from her world travels.  It appears that she is very forgetful,  and she needs our help to find the booty in her 4 chests.  If we are able to help Cap’n Zelda find all her missing treasures, we will get a special reward at the end of the treasure hunt, in addition to getting to keep the rewards we find.  If we help Cap’n Zelda find her way home, we will get a bonus Metal Wing Pegasus, It is basically the same feature as the Wandering Pirate but this time once you complete all sets of animals, you get a bonus reward.   Check out the details below and please do share with friends if you find it helpful.

FarmVille Wandering Pirate Summer Skies will be available on our farms from May 1, 2017 to May 29, 2017.
Note:  The icon announcing this feature will show up at the bottom of our game board about two days before the feature goes live…there’s no need to be confused about that picture, it’s just placed there to get us excited about the feature.
Here’s a look at the loading screen: 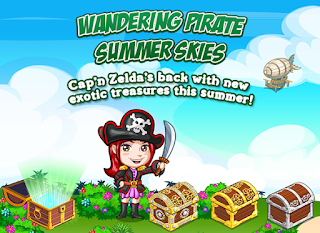 As mentioned above, this feature will have ALL NEW REWARDS. There will be 16 BRAND NEW animals to win found inside each treasure chest. If we complete all four treasure chests and win all 16 animals, we will also win a Metal Wing Pegasus as a 17th bonus prize. 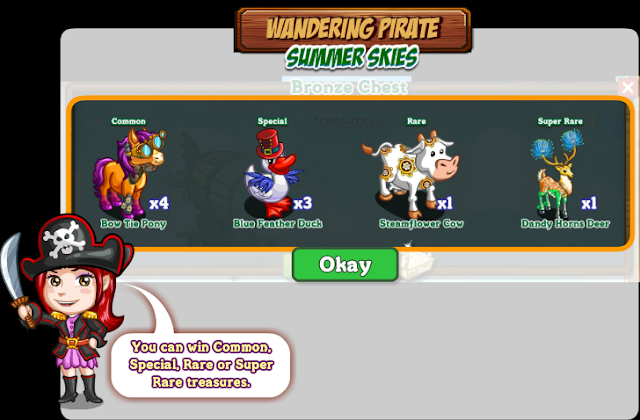 Just like the Pirate Ruby in the Wandering Pirate, you will be able to find Cap’n Zelda’s icon for the feature at the outside edge of your farms.  You will need to lure the animals with Summer Stones. You will be able to obtain Summer Stones by posting to the feed, collecting from friends posts, crafting them or purchasing with farm cash. Several options for every taste. There will be a countdown timer within the feature to let you know how long you have left to complete it.

Here is a sneak peek at the 4 treasure chests contained in the feature where we will be helping Cap’n Zelda find her treasure and earning fabulous rewards.

A look at the crafts that are associated with this feature, Summer Stones. Similar to several prior all farm and farm specific features, it looks as if there will be 3 different Summer Stone recipes, one for 1 Basket, 1 for 3 Baskets and 1 for 5 Baskets.

As with Wandering Pirate, The Wandering Pirate: Summer Skies Feature will have 4 different set of rewards.   Each set will have a common, a special, a rare and a super rare reward which you will be able to redeem for by using a certain amount of Summer Stone Recipes.  You can find the set of rewards listed below, according to the amount of Summer Stones Recipes you will need for each set.

Once we have found all 16 animals, we will receive a bonus animal, the Metal Wing Pegasus 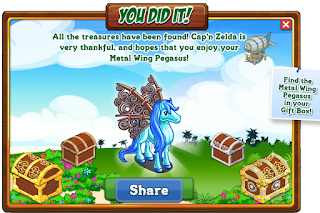 Finally a look at the offspring of the possible rewards
That's all we have for now.  Please remember to visit farmvilledirt.com often, and share our posts with your friends!