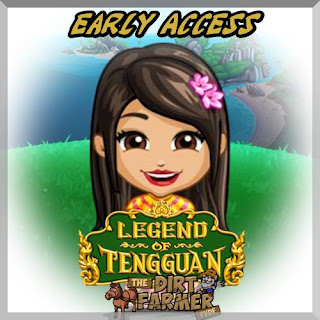 Farmville’s all new Legend of Tengguan Farm...  Early access to Legend of Tengguan will begin on 17th April 2017 and will cost the usual 45 Farm Cash  with General Access following a week later. Check out the details below and please share with all your farming friends

A look at the pop-up to buy and go


We will get free fuel and double bushels Early Access week, along with a bonus costume, bonus animal, free Legend of Tengguan starter pack and combine, exclusive quest chain with rewards  included in the purchase price.


The other gifts received will include  (In Addition to and the  rewards in the starter pack, 158 FC Value! 18 Shrine of Tengguan Parts, 32 Treasure Parts, 400 Points and a Thai Dancer Tree, Thai Welcome, and Thai Tunic Goat!")

That’s all for now, stay tuned to the Dirt Farmer for all the latest Farmville news an information