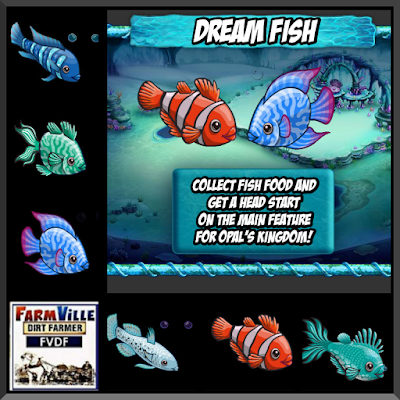 Starts February 22nd As your Dirt Farmer team announced a few weeks ago, the next farm will be the UNDERWATER THEMED OPAL'S KINGDOM. It now looks as though Zynga will be giving us a bit of a preview of the new farm and its centerpiece DREAM FISH FEATURE. Starting February 22nd, we will begin collecting FISH FOOD to earn a free DREAM FISH to get us started when we get to the new farm. Read below for details and please do share...

Remember that this is an unreleased feature and as such, the FarmVille Studio can change it prior to release.

It currently appears that the Dream Fish preview feature will begin on February 22nd, 2017 and end on March 12th, 2017 (The 12th is a Sunday, and the farm will release for Early Access the 27th of February and General Access the 6th of March so this feature will overlap with the farm)
A look at the pop- up associated with this feature.

The Dream Fish preview feature will allow us to win a free Dream Fish as a reward for collecting Fish Food. When the farm is released, it appears that we will raise the fish and add their fins and tails by using the Fish Food. This feature has a similar coding premise to the Dragon Eeryie and the Dream Horses. Let's hope nothing on them disappears as happened with those features...

For the preview feature you will be able to post for and collect Fish Food from your friends on the feed. If you are able to collect enough, you will get a free Dream Fish, and it will be waiting for you when you arrive on Opal's Kingdom. The posts will be give and get, you will get one for yourself whenever you help a friend on the newsfeed. There are some hints at Fish Food being craftable as well, but this may not be the case until we arrive on Opal's Kingdom - we shall update this post when more is known.

If you have difficulty finding game posts on the feed, or getting needed clicks, and you want to assure your success in this feature, we recommend joining the Dirt Farmer's Quest Help & More group. Click the picture below and ask to join today.

Finally a closer look at some of the fish possibly associated with this feature. We do not yet have names available or the procedure/cost for acquiring and raising them. We shall update this post when we do.