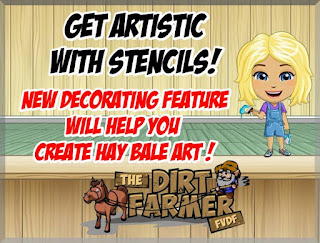 The Dirt Farmer Team have some exciting news for all the farmville decorators.  A new feature involving projecting stencils on to our farms. It looks like then you will be able to fill these in.


UPDATE - The feature is now called Sketch Easy and is currently coded to begin on 26th December, 2016. Remember with any unreleased feature timing could change at any time up to when we see it on our farms.

The first 3 stencils to be released will be the heart for 500 coins, the Christmas tree for 10,000 coins and the duck for 25 farm cash.

As of the enhance on 3rd January, the baby whale has been released for 10,000 coins and the Winter Penguin for 25 farm cash.

Along with the feature, it appears that 6 new colors of hay bales will be released!! Better yet, these appear to be permanent as no end date was coded and they are priced at 125 coins.


A look at the tutorial video that the FarmVille Studio has put together for the feature.

The table below shows possible stencil options available when released.

So if your new to farm decorating or just want to try something different this could be the feature for you.  It looks like alot of fun. More information as soon as we have any.