FarmVille Once Upon A Winter Farm 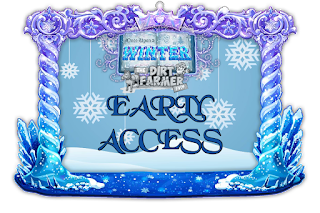 This farm will be somewhat on the unusual side. Similar to Avalon and a little like Story of Sakura, Once Upon a Winter will have two regions. Oddly, the second region, called the Icy Tarn will open just a few weeks after the farm on December 5th. The Once Upon a Winter Icy Tarn region will have its own Early Access period as well, read below for more details.

A look at the pop-up to buy and go

We will get free fuel and double bushels Early Access week, along with a bonus costume, bonus animal, free Once Upon A Winter  starter pack and combine, exclusive quest chain with rewards  included in the purchase price.

The other gifts received will include  (In Addition to and the  rewards in the starter pack, 158 FC Value! 18 Noel’s Castle Parts, 32 Treasure Parts, 400 Snowy Points and a Candela Tree, Carnivale Chicken, and Reina Pegacorn!)


Now for a look at Region 2, the Icy Tarn… As mentioned above it is currently scheduled to release on December 5th.

Another hint tells us that we will be seeing new interactive decos in the Icy Tarn.

It now appears that there will be additional rewards when the Icy Tarn is placed for anyone who purchased Early Access to Once Upon A Winter, but the region will unlock for all players on December 5, 2016. THERE WILL BE NO ADDITIONAL BUILDING STAGES OR CRAFTING COTTAGES ON THE ICY TARN. WE GET ACCESS TO ALL WITH FARM RELEASE. 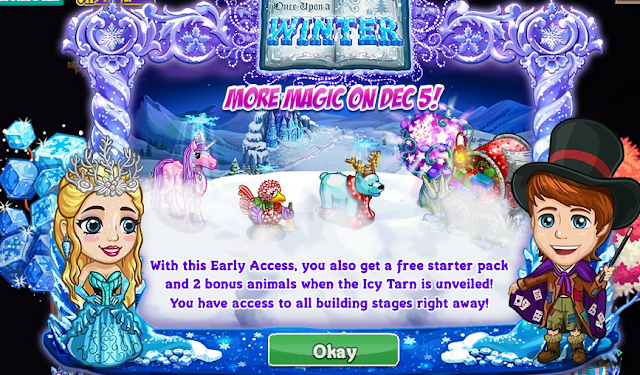 The gifts that come with the second early access period for the Icy Tarn currently seem to include an additional small starter pack, and 2 bonus animals. There is a reference to additional early access crops in the game code, but no indication of what they are so we are unsure if this will come to fruition, especially as they are not referenced in this pop-up.


That’s all for now, stay tuned to the Dirt Farmer for all the latest Farmville news and information...