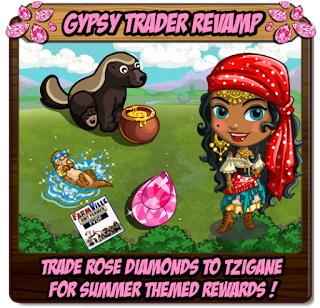 The FarmVille Studio will soon be releasing a new version of the Gypsy Trader to our farms. This will be a much simplified version with a greater variety of prizes. Read Below for details and please do share with friends if you find our post helpful.

Instead of all magic deer this go round, we will be getting a variety of summer themed prizes (though still all animals) so the feature will appeal to a more diverse group of players.  It will again be loosely based on Bring Back Winter, but a much more simplified version. Instead of having to collect several components to redeem for prizes there will just be one – the Rose Diamond. Also instead of bothersome daily collects or having to count crops to yield the redeemable consumables, it will be a simple post, collect from feed and crafting feature.

There will be three new crops required for the recipes for this feature. The  crops  will be available at the  market update before feature begins, but the  bushels are not start dated and are currently available  in the  bushel swap feature.

A look at the rewards for this feature

A  look at the recipes for crafting Rose Diamonds. We will be able to craft them in increments of 1, 3 and 5. Please note that Moonstone Onion is a chain linked crop, requiring prior mastery of Amber Grain and Amethyst Grape.

Finally a look at the offspring from the feature rewards.