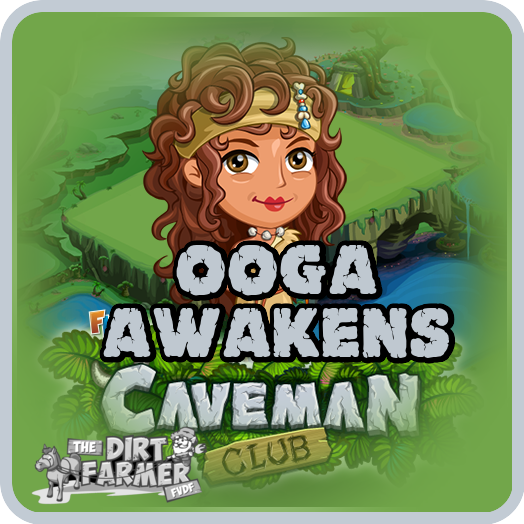 FarmVille Caveman Club Farm will have an all new unique special feature. It is a hybrid spin on mystrees and bonus tiles with the farm buildings tied in for an intriguing challenge. The feature will be called Ooga Awakens. Caveman Stan has awakened Lord Ooga and is trying to invoke his blessings to earn special rewards. Help him and you will earn consumable rewards to help with crops on your farm. Check out the details below and please do share to let friends know.

UPDATE: THANKS TO DIRT FARMER KATY, WE CAN NOW LET YOU KNOW THAT IF YOU HAVE OPTED FOR GENERAL ACCESS, AND OPT TO PURCHASE THE MAMMOTH MEADOWS EXPANSION FOR FARM CASH THAT WOULD OTHERWISE UNLOCK VIA TASKS ON JULY 11, IT WILL ALSO UNLOCK THE OOGA AWAKENS FEATURE.

A look at the teasers that foreshadow what is to come

Lord Ooga and his land are located on an elevated and separated tile to the right of home base.

If you hover over your Lord Ooga Statue, the area where the bonuses take effect will light up. 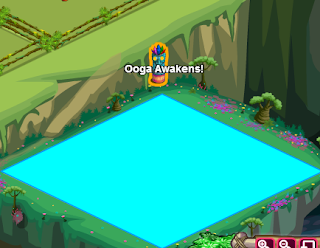 You can access the Ooga Awakens feature by clicking on your Lord Ooga Statue. 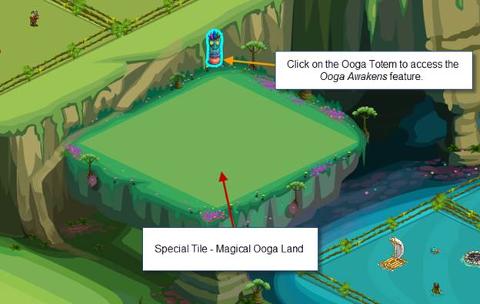 or by clicking the icon on the right side of your Caveman Club farm. 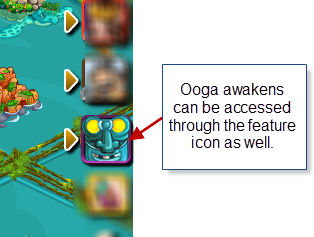 Now for an idea of the premise of the feature. Stan has awakened Lord Ooga.... We will need to invoke Lord Ooga's blessing to earn special consumable rewards. To access the spell book and begin to invoke Lord Ooga's blessing, we must first unlock his land. If you purchase Early Access to Caveman Club, it will include an additional bonus of unlocking Lord Ooga's land for free on arrival. If you wait for general (free) access, you will unlock Lord Ooga's land when you unlock the second unlockable land expansion Mammoth Meadows. That expansion will unlock on July 11th, provided that you have already expanded the Rockmore Rotunda one time, opened 5 gifts in the Rockmore Granary and reached level 24 in Caveman Club.


When you do unlock Lord Ooga's land, he will have a welcome gift awaiting you the first time you open the feature. You will be granted a Time Twister spell. 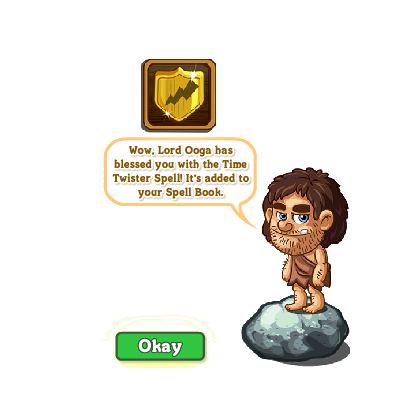 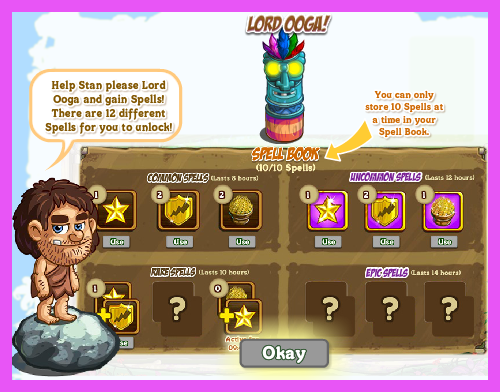 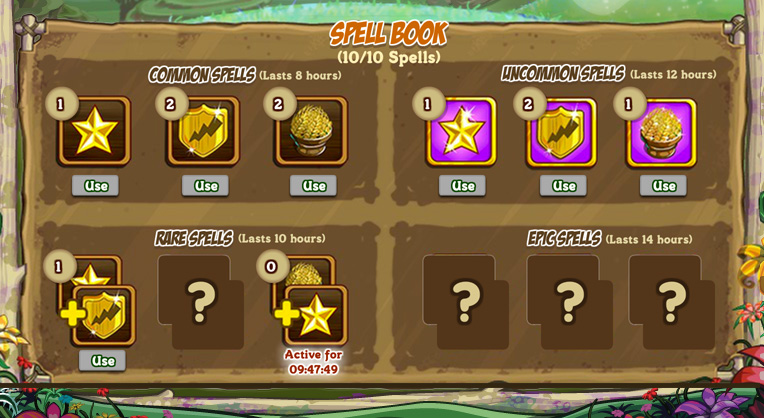 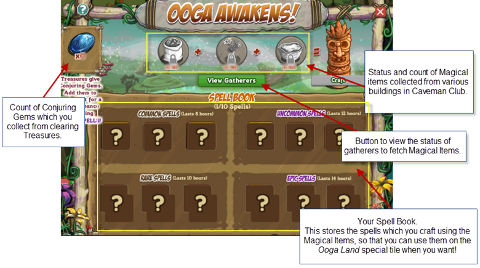 Now for a look at the ingredients needed to invoke Lord Ooga's blessing and craft the magic spells and how to get them .


Each time you craft, it will take 4 hours and when you collect your craft you will receive a random recipe. You cannot choose which spell to craft.

In order to obtain your ingredients, you will work on the farm buildings 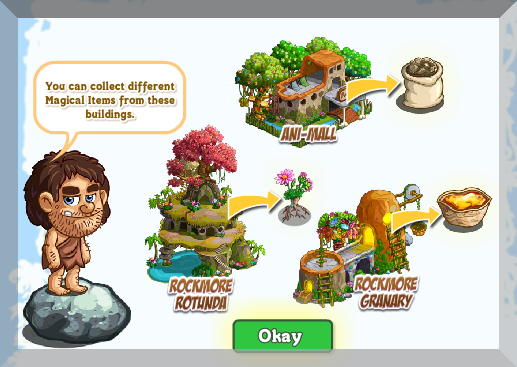 The farm characters will serve as gatherers to collect your ingredient rewards. There will be a place within the feature to track progress toward your next reward. Once you have completed one animal in the Ani-Mall, one level in the Rockmore Rotunda and opened one gift in the Rockmore Granary your gatherers will unlock 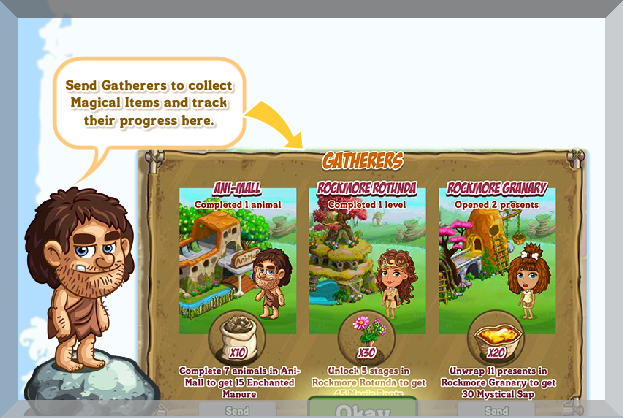 When you open the Ooga Awakens feature, it defaults to the spellbook view. To send or collect from your gatherers, or view progress, simply click view gatherers. 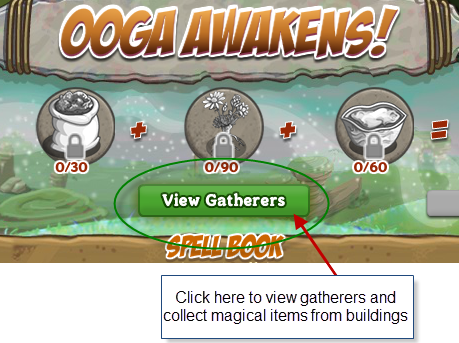 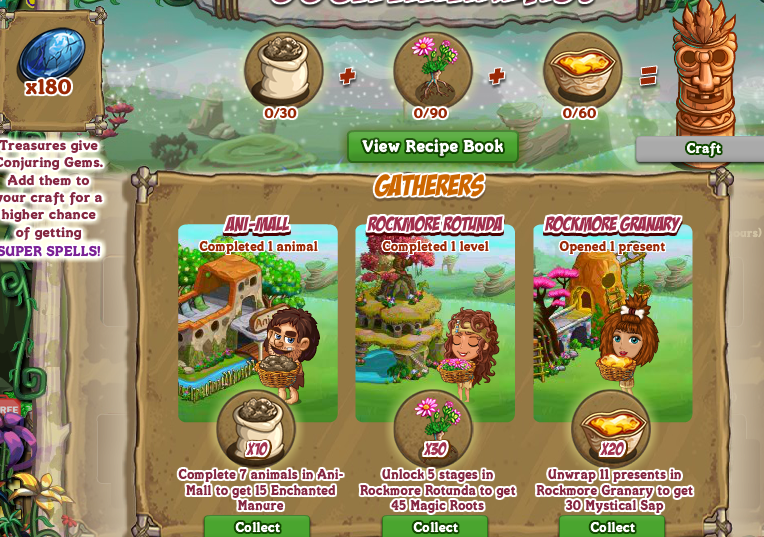 When you send the gatherers out, it will take 4 hours before they return with your magical ingredients. You can send any one,two  or all three at once as you wish. 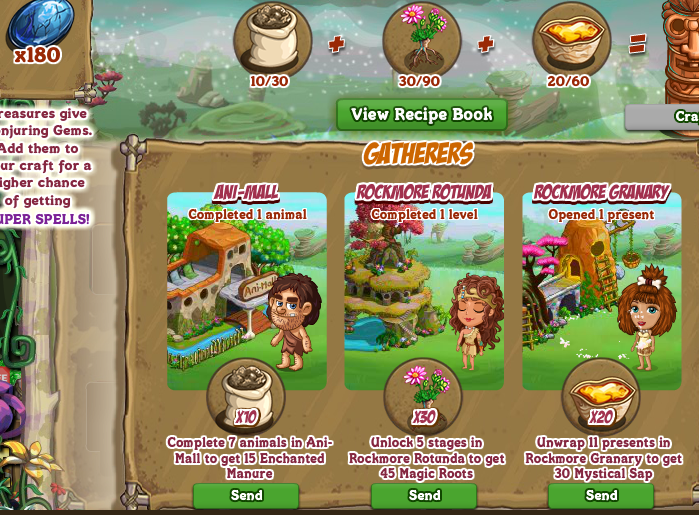 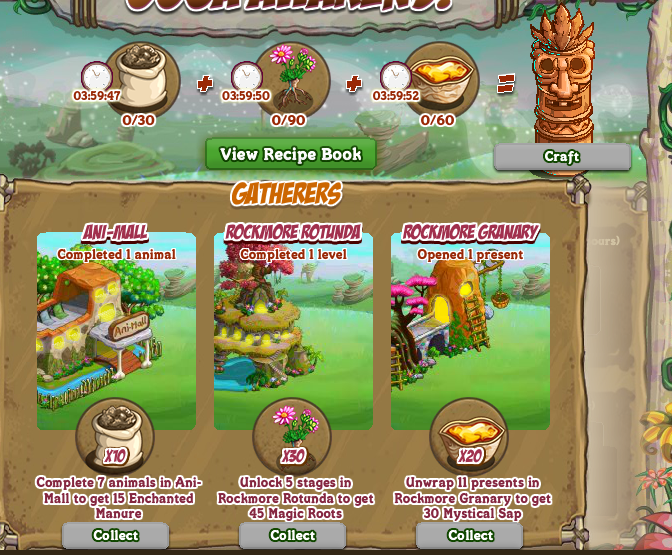 Enchanted Manure will be obtained in the Ani-Mall self contained crafting building with Stan serving as your gatherer.

The amount of Enchanted Manure that Stan will bring back each time you send him to gather, will grow exponentially as you progress in the Ani-Mall.

Once you have made the first animal and unlocked Stan as a Gatherer, he will bring back 10 Enchanted Manure each time.

Once you complete the 7th animal, he will bring back 15 Enchanted Manure each time.

Finally, once you craft all animals and complete the Ani-Mall building, he will bring back 30 Enchanted Manure each time.

NOTE: SIMILARLY TO STORAGE EXPANSIONS WITHIN THE SELF-CONTAINED CRAFTING BUILDINGS, THE INCREASES IN INGREDIENTS GATHERED ARE TIED TO THE LEVEL OF ANIMAL NOT QUANTITY. MAKING ONE ANIMAL REPEATEDLY WILL NOT ENABLE YOU TO PROGRESS. 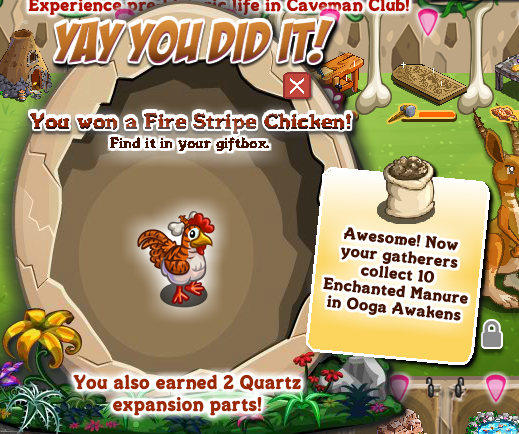 Magic Roots will be obtained in the Rockmore Rotunda main buildable with Tina serving as your gatherer.

The amount of Magic Roots that Tina will bring back each time you send her to gather, will grow exponentially as you progress in the Rockmore Rotunda.

Once you have completed the first level and unlocked Tina as a Gatherer, she will bring back 30 Magic Roots each time.

Once you have completed 5 stages in the Rockmore Rotunda, she will bring back 45 Magic Roots each time.


Finally, once you finish all stages and complete the Rockmore Rotunda building, she will bring back 90 Magic Roots each time. 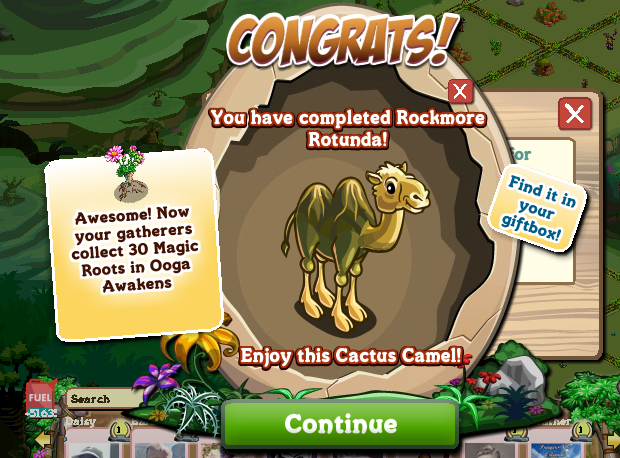 Mystical Sap will be obtained in the Rockmore Granary unwither ring gift building with Daisy serving as your gatherer.


The amount of Mystical Sap that Daisy will bring back each time you send her to gather, will grow exponentially as you progress in the Rockmore Granary.

Once you have opened the first gift and unlocked Daisy as a Gatherer, she will bring back 20 Mystical Sap each time.

Once you have unwrapped 11 gifts in the Rockmore Granary, she will bring back 30 Mystical Sap each time.

Finally, once you open all gifts and complete the Rockmore Granary building, she will bring back 60 Mystical Sap. 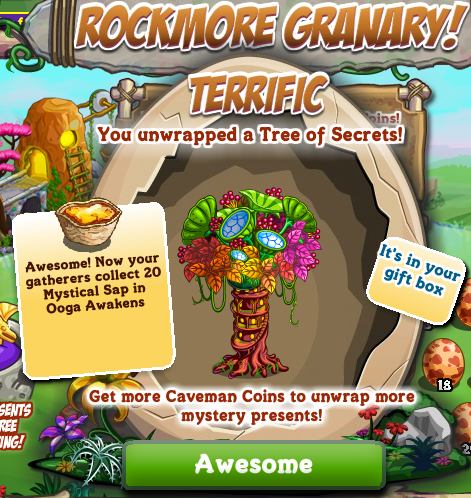 You will also have the opportunity to add conjuring gems to your spells, to increase the chances of getting a super spell. Super spells have the same effects as the normal spells, but last for a longer time duration.

Conjuring gems are awarded from opening treasures on Caveman Club. As such they are currently in finite supply. We have asked the FarmVille Studio if additional methods of collecting Conjuring Gems will become available and we shall update this post when they reply. 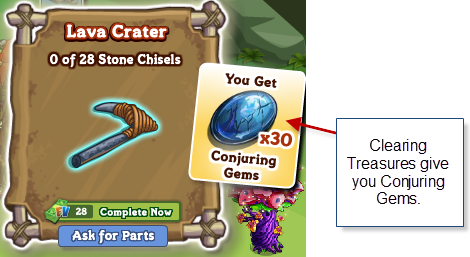 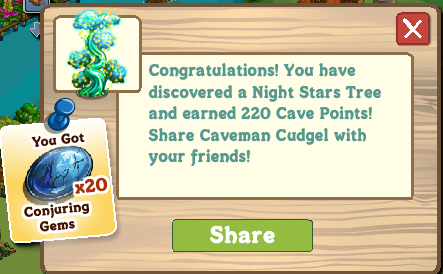 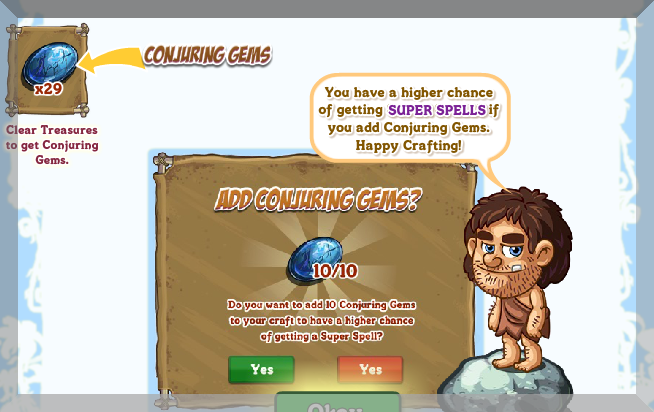 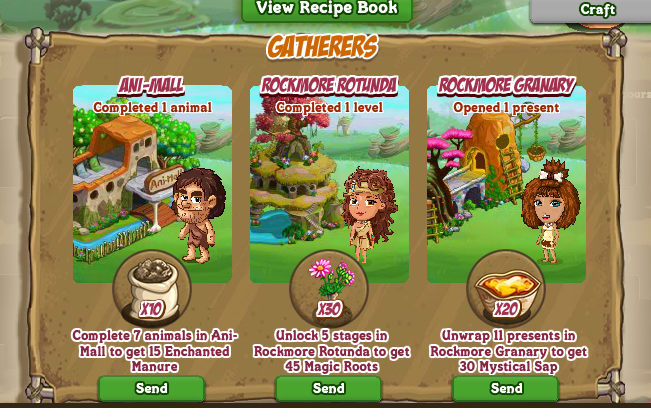 Once you have all of the ingredients , you can combine them to create magical spells to boost your crops. Which one you receive will be random, as the feature has a mystree aspect. Unlike previous mystree features, at least with this one duplicates remain useful.

When you have a complete set of ingredients, 30 Enchanted Manure,  90 Magic Roots and 60 Mystical Sap, the craft button under Lord Ooga will turn green.

Once you have clicked on "craft" you will then see the conjuring gem popup.

It takes 4 hours to craft one spell and you can only craft one at a time. 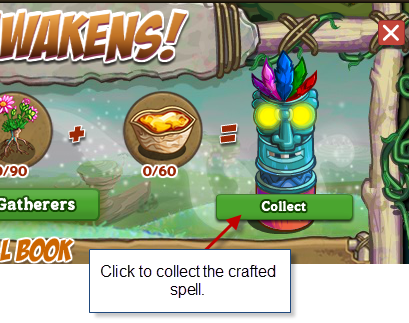 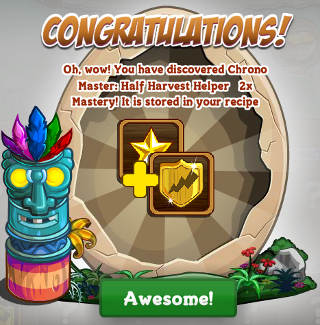 When you have a full set of ingredients, you will get the inventory full message, and will not be able to send your gatherers out again until you craft a spell.

Once you craft a spell, you may need to close and reopen the feature entirely, before you will be able to send them out again. 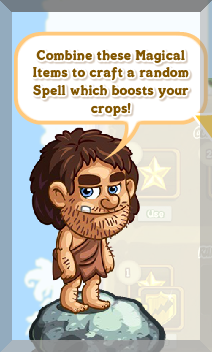 Now let’s take a deeper look at each type of spell and exactly what bonus it offers.
Common Spells (last 8 hours)

1) Spell bonuses will be granted on top of any game wide existing bonus - such as double mastery.

2) The spells are ONLY active on Lord Ooga's special Ooga Land tile, nowhere else on Caveman Club, and not on any other farm.


3) The spell bonuses are active on ANY crops planted on the Ooga Land tile - both Caveman Club specific crops and any all-farm crops that you plant there.

4) You can only use one spell at a time. Be careful not to click to use the wrong one - there is no way to discard an active spell, we just have to wait til it expires. 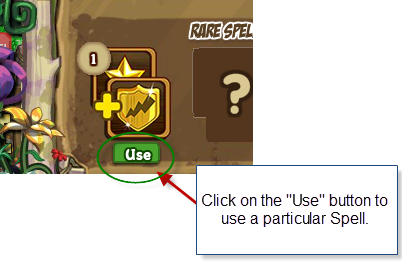 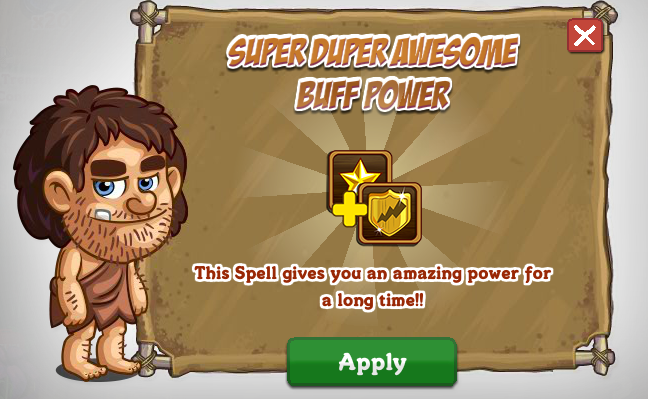 5) When a spell is in effect, there is a timer on that spell in your spellbook and on Lord Ooga, to let you know how much time remains. 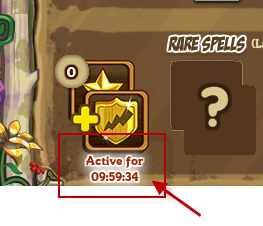 6) The recipe book view will not only show which spells you have in stock, but also how many. 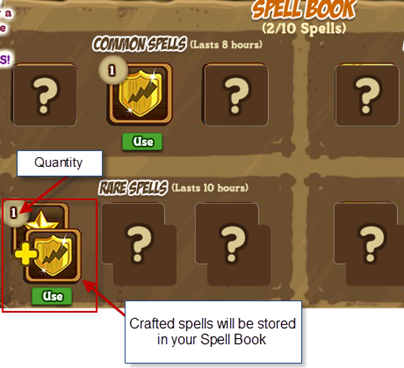 7) Be careful timing your use of bonuses. Activate them at a time that will allow you to get full benefit of the bonus before it expires (You can even apply them to ready crops) See the below example from the Zynga Support site.

To summarize, the Time Twister spell will work for your crops, if you use it before planting, even if it expires before they are done because grow time is determined at the time you plant.

The spells involving double bushels or double mastery will not work if they expire before harvesting - so you will want to apply them later, and as stated above, you can even do that when your crops are ready.

The Chrono Master and Crop Surge spells which involve both harvest helper and a double bonus, will split. The Harvest helper portion takes effect at planting and the double bushels or mastery take effect at harvest - so be mindful of the timing of them and on what you decide to use them.

To read the Lord Ooga FAQ from the FarmVille Studio on the Zynga Player Support site, click here. 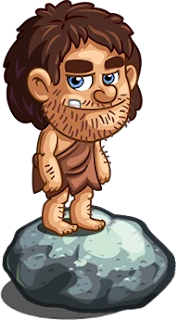 That’s all for now, stay tuned to the Dirt Farmer for all the latest FarmVille news and information.