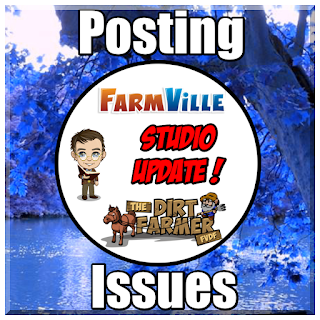 The posting crisis is heading into it's 4th week here on Facebook...But we had some good news for those who can post...Pictures are back with our published posts...This actually wasn't part of the posting problem but rather an attempted workaround by the FV Studio to help fix the issue...In fact the studio has attempted more than a few unorthodox workarounds in a desperate attempt to circumvent Facebook's utter failure on this matter...The Dirt Farmer's TECH TEAM has been in constant contact with the Farmville Studio during this entire crisis...Unfortunately it hasn't given us a final solution...yet ...We do however have a statement recorded just a few hours ago ...We are going to play the Farmville Studio's comments on the posting issues for you right now
(Special Thanks to Nishant from the FarmVille Studio Project Management team for speaking to us, and to Dirt Farmer Karen, better known as our Gnome-addicted ASK The Dirt Farmer Admin, for creating the transcript.

Good evening everyone. Thank you very much for giving us an opportunity to share this message with our players, we really appreciate it. My name is Nishant and I work for the product management team in Farmville. Today I wanted to share a few updates about the recent issues with Facebook feed posts which a few of our players have been experiencing. So we have been working on this issue since April 5th, the time when it was first reported. It is our number one priority to solve this issue for our players and we are trying every possible course of action to find a permanent fix for this issue.
We have a team of engineers working round the clock to  push out back end fixes from our end to insure smooth and clean play for as many of our players as possible. However, since the root cause of this issue lies with Facebook we are working very closely with them to identify the fixes and decide the next course of action. Facebook has shown a good response and we are fully committed to following up with them on a highest priority. While we are working on this issue we truly appreciate the patience and support of our community for Farmville. This means a lot and thank you very much for staying with us.

Locke: That is the statement directly from the Farmville studio, I'm sure that it was a prepared statement that one of their engineers read off, which is uncommon in the almost seven years that most of us have played Farmville. We can remember when we were just left in the dark, no one ever told us anything, no one ever seemed like they cared, things just either stayed broke or they got fixed sooner or later. At least now we know that there are actual people on the other end trying to help, trying to get us through this and they work quite closely with the Dirt Farmer's Tech Team, back and forth on a daily basis, multiple times a day. So you're not just left out in the cold, if you can't post, like Robbin, you're not just left out in the cold, there are people trying to get the game back up and running and we just wanted you all to know that.
Robbin: Well, we feel like we're left out in the cold. You know we have a post in ASK, asking people to say can they vote yes or no and put your state and your location, and there's over 3000 posts, comments on that post, and most of the locations is from the midwest, east. There's a scattered few to the west but the majority is from the midwest, east.

Locke: That's pretty much probably because a majority of the people that play Farmville, servers aren't set up geographically and I don't even think that Facebook pushes are set up geographically. I think they set up by the time that you actually join Facebook. If you join Facebook at the same time somebody in Nigeria joins Facebook, a second later somebody in Argentina joins Facebook, you're probably going to be on the same set of pushes that they're on. I can't say for certain that it works geographically, but the fact that I run a fan page that deals with Farmville and I post constantly, I can tell you that I get better response when we are in a better time zone in the midwest and eastern time zone. So I think that we just have a larger number of people playing in those time zones as opposed to it being something geographical.

Robbin : So in other words, we should all move.

Locke: No. It wouldn't make any difference, we're not getting the response from the west coast because of the times that we're posting, more than likely.

Robbin: Because I could be packed in 24 hours.

Locke: You could go live with your son in California. I hear that's a really hopping place to live right about now.

Heather: We have people with problems in Australia, the UK, and all over the world. It's just where most of our members are, where we're best known, that we're going to get the most response, in the US.

Locke: Exactly and when we were first posting this we were telling people that it is affecting other Zynga games, it is affecting other non Zynga games, and we got a lot of push back on that, "no, no it's not, I can still do this". Well I can still play Farmville. I can still post on Farmville. You might be able to post on, you know, Texas slots, you might be able to post on Castleville or whatever games or still out there. I don't play other games. But other people can't, so it's affecting different people different ways. If you don't have the ability to post on Farmville, you may have the ability to post on Farmville 2, or vice versa. So there really is no rhyme or reason, and the pushes that Facebook are doing right now, which are few and far between as far as I'm concerned, are nothing compared to what the Farmville studio is trying to go through to get the game up and running again. But you got to understand, Farmville, you know, it's got a life expectancy. It's only going to live so many years and we're pushing 7 years right now, and if we get 8 years, 9 years, 10 years, that'll be a miracle. So something like this is almost like, you know, an injury, like Farmville just fell off a cliff. This could kill it right away, so you're really hoping for the best because we've all put a lot of money into the game, we've all put a lot of time into the game, we've all put a lot of effort into the game, to just see it go out, you know, because of an accident on Facebook's end.

Robbin: As it looks right now, I mean, it'll be 29 days for me in about 40 minutes, and it doesn't look promising.

Locke: She's got it down to the second, folks.

Heather: You do have sometime in there that you could post though right, if I remember right?

Heather: I mean it comes and goes. I can tell you they are really trying, these are actual human beings, and they are probably 10 times more stressed than we are, trying to get this fixed right now.