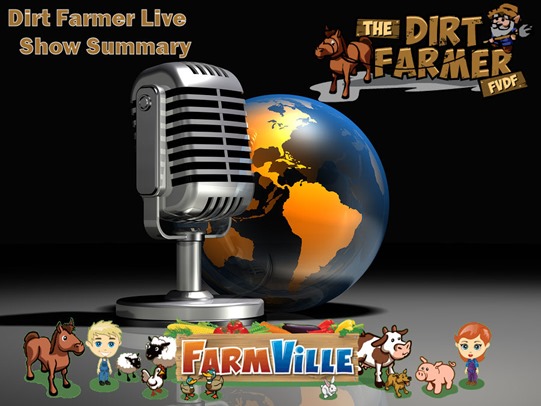 Howdy Farmers!  Have you ever wished that you could listen to the Dirt Farmer Radio show, but you couldn't?  Maybe you were out plowing the back 40, or milking the cows, or even sowing some wild oats.  Maybe you haven't figured out how to join that new fangled contraption, the dirt box.  Maybe it's just a little too hard to hear the show.  Well Papa Dirt has a surprise for you!  We hope that you enjoy the premier edition of the Dirt Farmer Gazette, a short summary of many of the important subjects discussed on the show.  If you like it, please remember to share with your fellow farmers!

May 15, 2016
If you purchased Early Access for the Story of Sakura Farm then you are aware that this entitles you to Early Access for all the regions of SAKURA including the final ZEN region which will go live to Early Access Players sometime tomorrow and will be released to everyone else on Monday, May 26.

Community Goals
We will have another combined challenge starting tomorrow
We will need to clear 150 K treasures in the Story of Sakura
Our individual  contribution to qualify will be 3 treasures
Please click on the link to see more information, including the rewardshttp://bit.ly/21q3715


Bob's Berry Farm
Bob's Berry Farm is being updated with new spring and summer themed items, coded to be released on May 15th.
There are only 9 items available but they are all new.
As of showtime, we are seeing reports of whoa farmer because the crafting recipes have expired.  We hope that this will be fixed soon.http://bit.ly/1NuB0Nq

There's an upcoming land expansion, "Hardy Hills" on the Mountain of Strength region of the SOS farm as long as you have upgraded the Judo Dojo to Lvl 10 and have reached Sakura Lvl 69

There is a minor glitch that some farmers are experiencing with the stamps for the Spanish Gala Countdown.  You may have noticed that you are posting a Girl Gnome Stamp instead of the correct daily stamp to your feed.  This is a graphics glitch and the Farmville Studio is looking into this issue.  You will still receive the correct item.

**POLL OF THE WEEK**We asked the following question:  Have you been experiencing MORE FLASH CRASHES OR UNRESPONSIVE PLUGIN MESSAGES than usual?
75% think it's gotten significantly worse in the last couple of weeks
21% claim they have not noticed any change
a very fortunate 4% say they never have such issues

Facebook Game ArcadeWe have a new icon that appears on the side of our game inviting us to download the app
It is safe, and it is from Facebook
When you download it , there is a play button to activate the app.  You may have to give permission to launch the app, don't worry if prompted to do so.
Essentially, Facebook Games Arcade is a desktop app that will allow you to play without connecting to Facebook in a browser
We have a complete guide for you on our website, you can find it by clicking on the link below
Facebook claims the new app is a faster way to play, so far some players agree, some see no difference and some say it is slower. Everyone's computer is different so the only way to know if it will be faster for you is to try it out.
It is a separate app and within it FarmVille is not competing with other things in your browser for memory so in a sense it may speed things up.
Since Flash does not release memory until you close the tab, if you are traveling to a bunch of farms and do not close and reopen the app every two or three it will lag for you.http://bit.ly/251GZkL

If you have been finding unwanted tags on your Facebook Timeline, including spam and pornographic tags, we have some basic and easy to understand directions on how to review both the posts that you are tagged in, and the tags that people may add to your posts after you publish them.
http://bit.ly/1sonIsI

An intriguing new feature, Sakura Strikes Back, will be released on May 23, 2016 and it will end on June 27, 2016
After the end date of the feature, there will be two additional days, until June 29th when you can purchase prizes from any opponent for Farm Cash.
The Bonus Prizes are on a faster timer, and if you wish to obtain all of those, you will need to check the tables on our complete guide for the end dates and complete all battles by June 17.http://bit.ly/1ZUI1YM

Endangered Species Day Quest started this past Thursday and will run for the next 10 dayshttp://bit.ly/1TbZaP5

That's all we have right now, remember to always visit Ask the Dirt Farmer for up to date information and help, and enjoy the rest of your week!