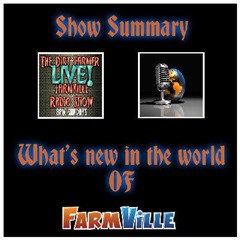 Howdy Farmers!  Have you ever wished that you could listen to the Dirt Farmer Radio show, but you couldn't?  Maybe you were out plowing the back 40, or milking the cows, or even sowing some wild oats.  Maybe you haven't figured out how to join that new fangled contraption, the dirt box.  Maybe it's just a little to hard to hear the show.  Maybe you just want a handy reference of some of the important game links that we share during the show.  If so, we hope you enjoy this week’s written summary of the Dirt Farmer Live.  Please remember to share with your friends!

The Zen Valley portion of SOS went live for early access players last week, and will be live for everyone starting  in a few hours.  This is the fourth and final region of SOS.  While some of us may have enjoyed the farm, we also faced working around many glitches, including the lack of Treasure Parts in the free gifts tab  and 30 days of Facebook posting issues during the middle of the Sakura farm.   We also had to deal with unprecedented throttling of game play.  All in all it hasn't been a tremendously pleasant experience.  Patience was a recurring theme of this farm, and we certainly needed a lot of it while attempting to play this farm.  Hopefully the feedback from Players during the course of this farm will be heard by the Farmville Studio.  It would be nice if they would "cherry pick" the GOOD aspects of the Story of Sakura while leaving behind all the frustrations. This farm was extended from the usual 8 weeks to 14 weeks by the Farmville Studio in order to please players who have become overwhelmed with the rapid pace of new expansion farms, but as we have experienced, the extension brought it’s own unique set off issues.  Many players are already looking ahead at the new STONE AGE Farm that we should be seeing in preview in a few weeks.  And of course the Dirt Farmer will bring you news on the new farm as soon as it becomes available

If you are trying to place animals and buildings on Zen Valley, please keep in mind that the Zen terrain is NOT ordinary land, and  you cannot place animals or buildings from ordinary land in that ground. Only buildings and animals LOCKED to Zen can be placed on that terrain.  For more information about the Story of Sakura Farm check out our Complete Guide.

A Quick Tip: Are you finding BUSHELS IN YOUR GIFTBOX after harvesting the Judo Dojo on Story of Sakura? Simply sell them. Obviously this is a mistake and should not be happening as bushels should go directly into the Market Stall.

We have a new tool to help you with your management of your gameplay and your computing in general.  Fast.com is a new internet speed check that was recently created by NETFLIX.  The Dirt Farmer has always recommended using speedtest.net for this function.  But, it never hurts to get a second opinion, and this site can provide one.  Most Internet Service providers do have their own speed checks but we've always liked using independent speed checks rather than trusting the service that's charging you for the internet speed.  It's always a great idea to run these checks.  We often hear comments from players who are paying for 25 mbps and only receiving 3 or 4 mbps.  In other words they were getting ripped off.

Many of you may have noticed that The Dirt Farmer LIVE! Farmville Radio show does not only post a POD CAST but a show summary as well.  This is akin to a TRANSCRIPT meant to help hearing impaired players who cannot hear the show.  Others have told us they simply don't have speakers or headphones for their computer. Some may have issues connecting to ADR and the rest of you may just want to look up a tip or a link you heard on the show without having to re-listen to the POD CAST.  But, you should re-listen as much as possible, sometimes Locke's jokes are actually funny if you hear them 10 or 20 times, or so we’ve been told by Papa Dirt himself.

There are new items for coins in the market for the Zen Valley region. Visit the market today to get yours. 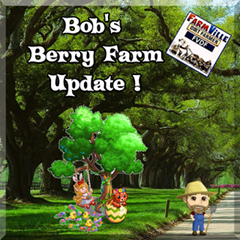 Bob's Berry Farm is FIXED and you can now craft all the items and work the feature without getting a WHOA farmer.  For more information and tips about Bob's Berry Farm, check out our Dirt Farmer Guide 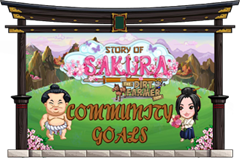 We have a new set of community goals starting this week.  Players will need to Craft 4 Million recipes in Zen Garden House, our individual contribution will be to craft 40 recipes in the Zen Garden House.  The rewards for this coming week are un-withers, super fertilizer, turbo chargers, and 3 days of no wither on the SOS farm if we meet the 4 million recipe goal.   We at the Dirt Farmer hope that the Zynga Studio might consider changing the rewards in the future, maybe adding farmhands or even instant grows for animals

Zen Valley Region vehicles are now in the market, and are available for coins.  The Harvester and Seeder are  30,000 coins each and the Tractor is  10,000 coins.  We do not have a combine in this release but if you purchased Early Access for Story of Sakura, the early access combine will work on all portions of the farm. 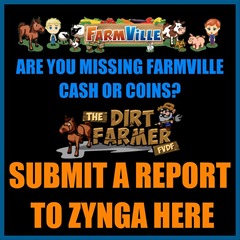 This week saw the ability to report missing farm cash or coins by reporting directly to Zynga, instead of going to support. There is an easy to understand form if you click on this link.  The new FV studio is listening to players, and are trying to help us out when we find our FC is missing.  This is certainly a very welcome change from when the FV Studio was based in San Francisco. The current team is actively addressing concerns raised by both the Dirt Farmer and the general population of players as well.
The form has 4 simple but reasonable options
Cash spent accidentally through a pop-up
Cash missing from the total cash amount
Coins spent accidentally through a pop-up
Coins missing from the total cash amount
Then you have a section to tell Zynga what happened, and you will need to provide your FV or FB UID and give your email address before submitting your claim. Please share this valuable information with your friends. 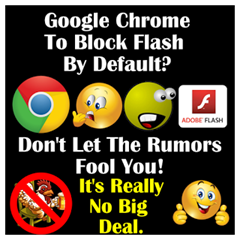 Have you been seeing stories in your newsfeed and on the news about Google Chrome blocking Flash by default? There isn’t any need to  worry about this.   Google is moving toward making HTML5 the default user experience. However this will have minimal effect on our ability to play FarmVille on Chrome.  Flash will still be bundled with Chrome, and the top 10 flash-using sites will continue to have it run for another year.  Facebook is one of these sites.  After a year, we will still have options to allow flash to run.  The Dirt Farmer has a complete guide explaining all of this, and we will update it as new information becomes available. CONGRATULATIONS  to the winners of last week’s BATTLEGROUND Challenges (week ending 05.15.2016). Chris Roth won for the Enchanted Glen Throwback Challenge and Elaine Rather Foster won  for the Uruchumai Flash Challenge. This week’s challenge is victory medals. As always, the reward for the winner of this Challenge will be a Papa Dirt Prize: your choice of ANY Unwither Ring or Double Statue from the Market. If you are not a member of the Battleground Group,  JOIN TODAY! and invite your friends. Please Share.

We all know that playing Farmville isn't getting any easier these days. Whether Farmville is throttling  access to your friends or the  Facebook newsfeed is hiding them from you it's hard to find help links on the newsfeed.  Add that to the fact that a lot of fellow players have quit and it becomes very challenging to  find help.  That's why you should join one or all of the Dirt Farmers SHARE Groups. Mam-Maw's Trading Post, Quest Help and More, The VOTE HELP Group and GOT SHEEP are link sharing groups where you can find neat items and even get help with common FV activities.  Be sure to ASK to JOIN today and please tell your FV friends about these helpful resources

Zynga and their new CEO Frank Gibeau are betting heavy on mobile games as the future of the company.  This may worry some current players of Zynga's Facebook based games such as Farmville.  It seems that the rumors are flying once again that the end days of Farmville may be upon us.  While there is no denying that we are closer to the game "sunsetting" than we were just a few years ago, we have a new farm on the way and more creative features showing up in preview.  It is unlikely we will see the end of Farmville this year.  It still remains a vital source of revenue for Zynga
Speaking of Zynga, they just launched yet another mobile game this week. It’s a wizard of oz themed match 3 game that will join a parade of match 3 games zynga has released in the past few years
We at the Dirt Farmer wonder if Zynga will ever take a look back at their greatest success.  That being Farmville and examine what actually made it a worldwide phenomenon,  and what led to it's decline in recent years.  The Dirt Farmer already knows, and he'll be bringing you an article in the next few days outlining to Mark Pincus, Zynga and the Farmville Studio in an OPEN LETTER what they did wrong since the launch of Farmville and what they need to do to reignite that magic that made Farmville so fun to play...stay tuned.

In the meantime, we hope you will visit our website as often as possible.  Your support and your clicks on that website is what enables us to provide our services to all the players.
Share those posts from our Facebook page so we can reach even more players, so we can help them manage their game and stay in the game.
Without YOUR support there is no Dirt Farmer.  Thanks to each and every one of you!

Here’s the link to this week’s podcast, because don’t you really want to listen to all of it after reading the summary?

click here for an hour of entertaining farmville news!