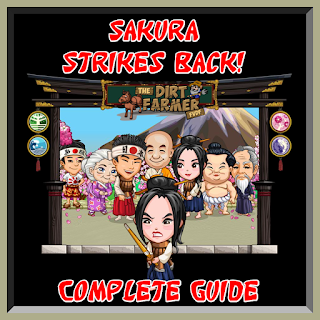 With the release of the fourth and final region of FarmVille Story of Sakura ZEN VALLEY, we can expect an intriguing new feature. Sakura Strikes Back. It’s time…. Are you ready for the final showdown? Sakura will be battling several opponents after she learns all four skills, Patience, Balance, Strength and Humility. Will you help her duel opponents to win the Ultimate Kendo Championship? Read below for more and please share....

The Sakura Strikes Back feature is currently coded to go live on May 23rd, 2016 and end on June 26th, 2016. After the end date of the feature, there will be two additional days, through June 28th when you can purchase prizes from any opponent for Farm Cash. The Bonus Prizes are on a faster timer, and if you wish to obtain all of those, you will need to check the tables below for the end dates and complete all battles by June 16. 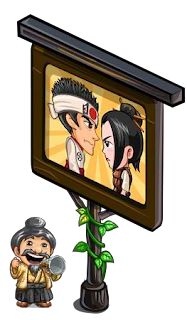 Sakura will be battling several opponents pictured below, in a grand showdown. This is another feature that has the popular  reward choices built in.We will be able to select our bonus rewards, go through 4 stages of duels with individual rewards ,watch the fight and then receive the bonus reward if we win in time. 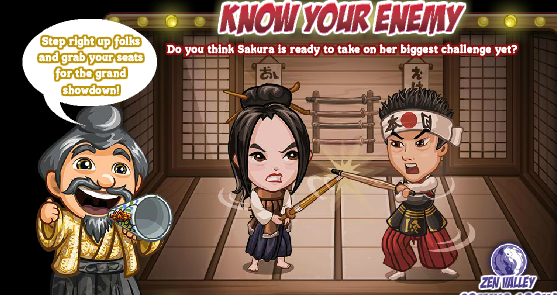 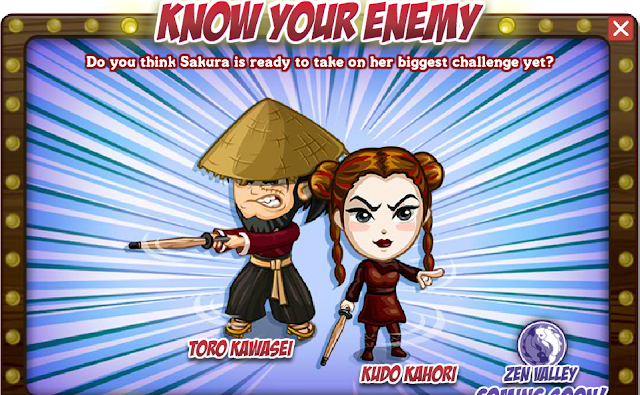 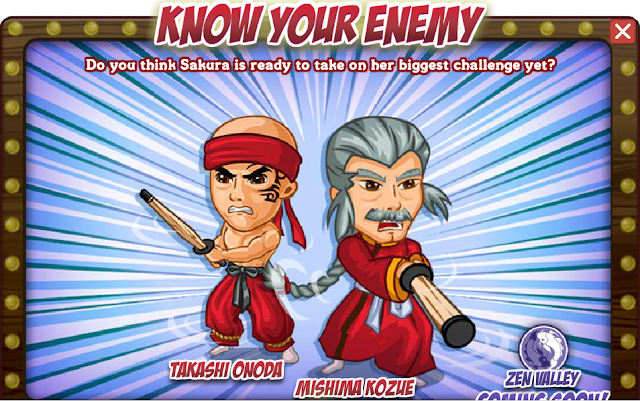 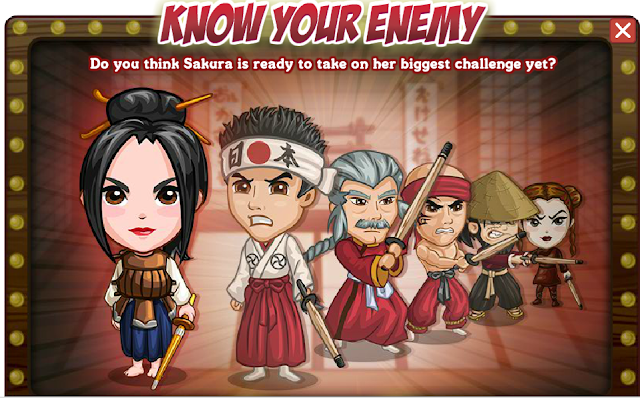 We will be helping Sakura fight Masashi and his minions and make them eat humble pie. 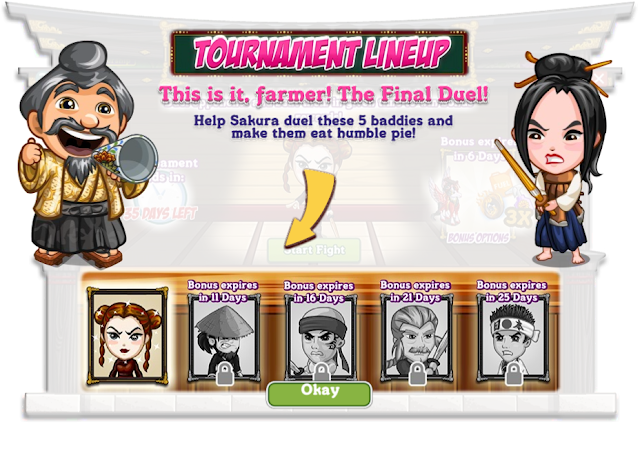 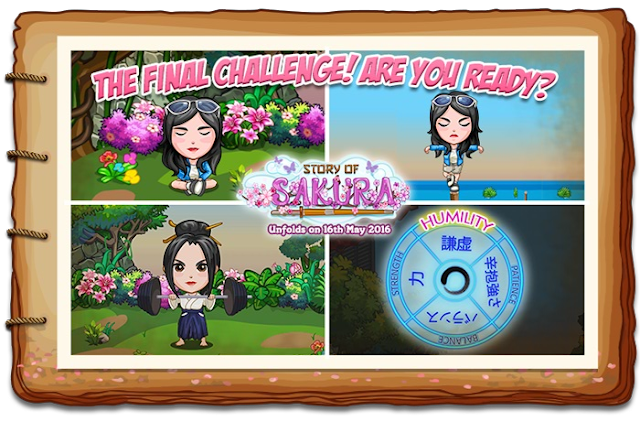 You will be able to select a bonus reward before beginning 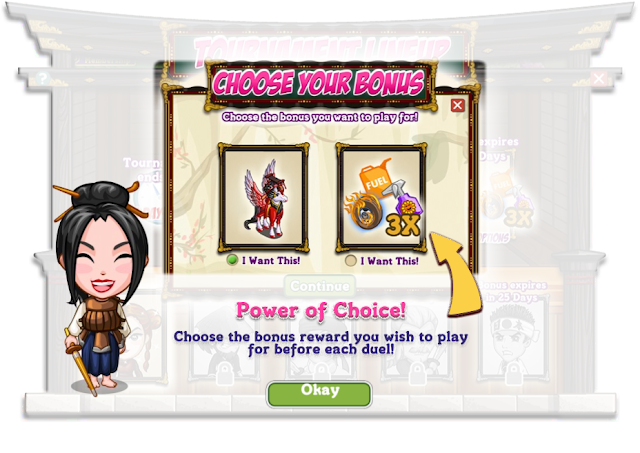 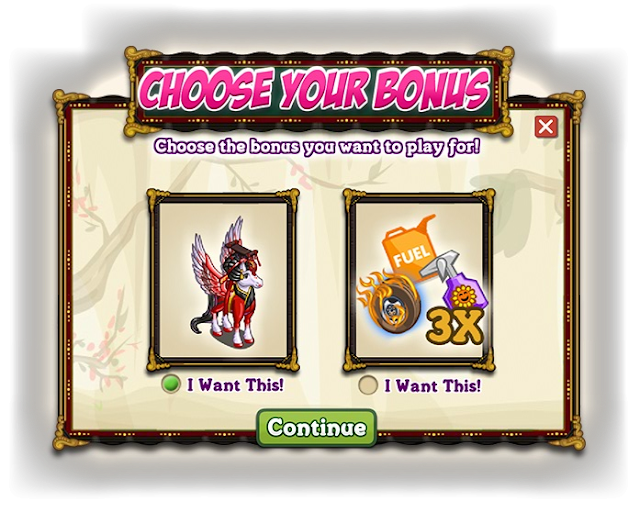 To beat each opponent you will need to go through four rounds, each with it's own reward. 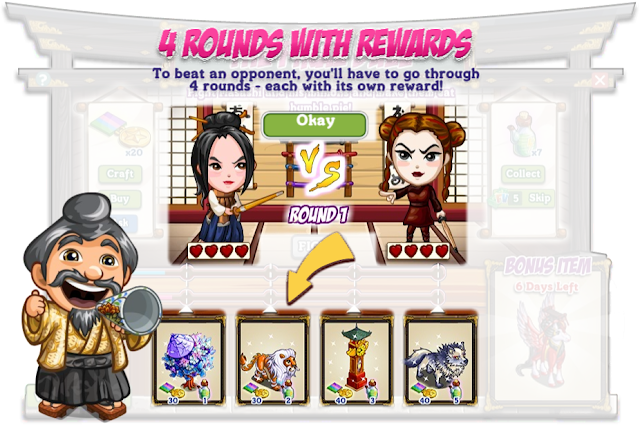 We will be collecting or crafting Victory Medals 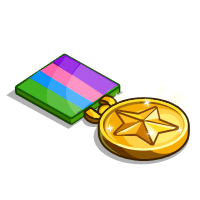 You will be able to craft the Victory Medals in increments of 1, 3 or 5. Now for a look at the recipes and crafting times.

and collecting Thunder Ryokuchas. You will be able to collect these from within the feature by clicking on the collect button every 4 hours.  (Note that the image shows 6 hours, the FarmVille Studio has asked us to let you know that it will actually be 4 hours) 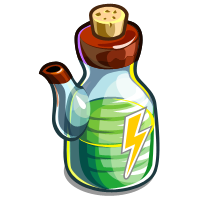 When you fill the meter for each item, 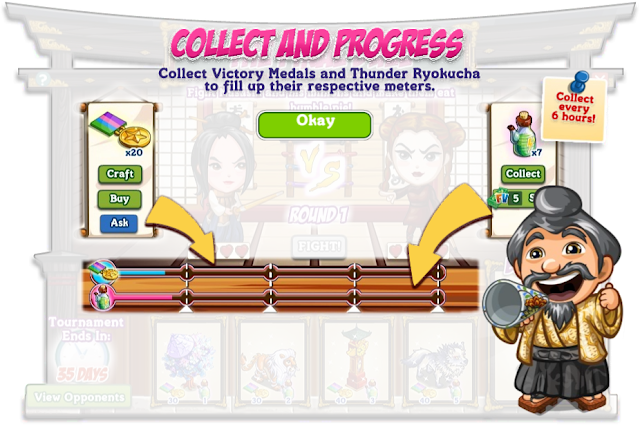 then you will be able to activate the fight button and click on it to duel your opponent. 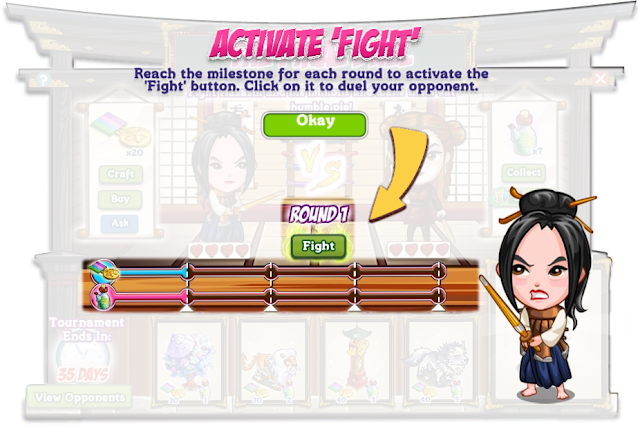 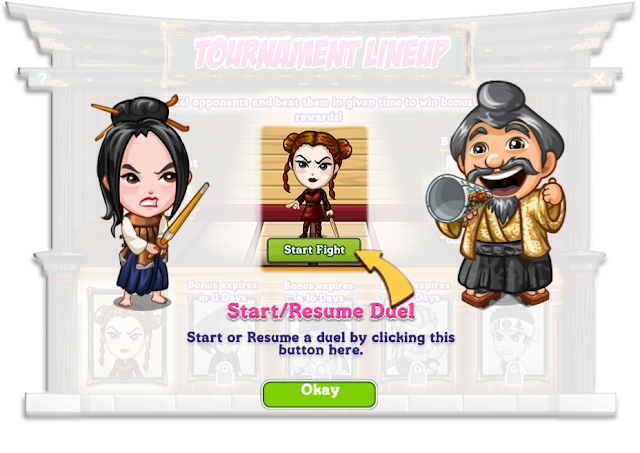 You will see two separate timers, one for the duration of the entire feature, and one for the time you have left to defeat your chosen opponent if you wish to collect the bonus reward  that you selected earlier. 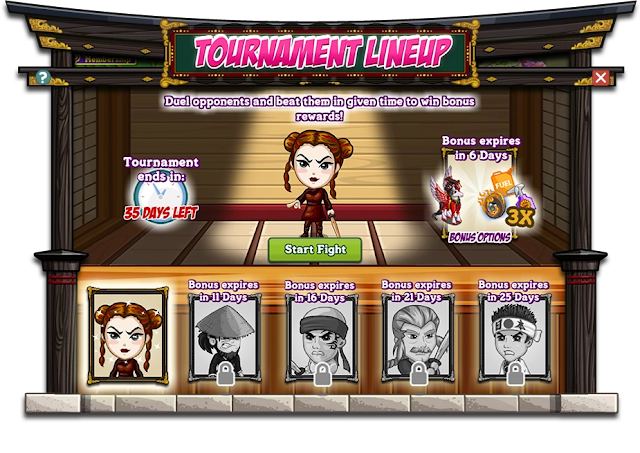 You will also see a menu at bottom with each evil doer that you must defeat and how long is left to do so and collect a bonus reward.

Once you start a fight, the bad guy meter will turn into a prize meter and  show you the rewards for the four rounds and what you need to collect them. 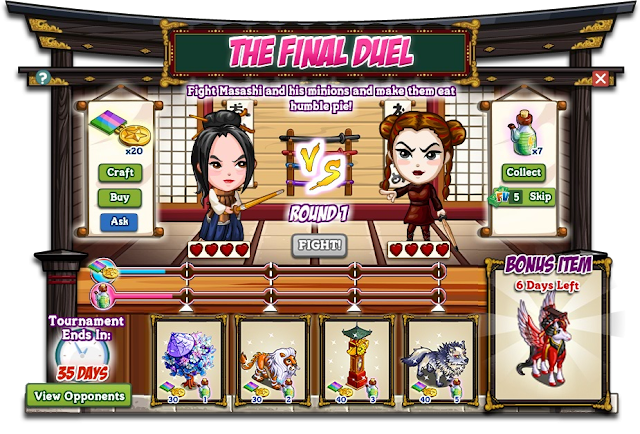 Now for a look at the opponents, dates and prizes associated with Sakura Strikes Back.
NOTE: ALL TREES ASSOCIATED WITH THIS FEATURE HAVE GIANT LEVEL TWOS
NOTE TWO: THERE APPEARS TO BE AN OPTION TO SELECT YOUR OPPONENT. IF THE FEATURE DOES INDEED ALLOW YOU TO CHOOSE TO FIGHT THEM IN ANY ORDER (WE WILL NOT BE ABLE TO CONFIRM THIS UNTIL RELEASE), BE MINDFUL OF THE END DATES FOR THE BONUS PRIZE OF EACH BATTLE, AND THE ONE EVERY 4 HOURS COLLECTION LIMIT ON THE THUNDER RYOKUCHA WHEN MAKING YOUR CHOICES SO THAT YOU CAN COMPLETE ALL BATTLES AND OBTAIN THE BONUS PRIZES THAT YOU WISH TO.
NOTE THREE: YOU WILL NEED   1,200 VICTORY MEDALS AND 75 THUNDER RYOKUCHA TO COMPLETE ALL BATTLES IN THIS FEATURE. COLLECTING THE THUNDER RYOKUCHA 3 TIMES PER DAY WILL ALLOW YOU TO COMPLETE ALL BONUS PRIZES. IF YOU USE THE 5 VICTORY MEDALS RECIPE. YOU WILL NEED TO MAKE IT 240  TIMES TO COMPLETE ON CRAFTING ALONE, THIS REQUIRES FILLING 30 FULLY EXPANDED  CRAFTSHOPS AND YOU WILL NEED 480 SPROUTING CRYSTALS BUSHELS, 720 PURPLE DECOR TURNIP BUSHELS AND 720 CRYSTAL LILY PAIR BUSHELS TO DO SO.
Opponent One
(Each opponent will unlock as you defeat the prior one)
Kudo Kahori – A sneaky ninja warrior disqualified once for using a knuckle duster inside her gloves.
The Bonus Prize in the Battle with Kudo Kahori will end on May 28th. 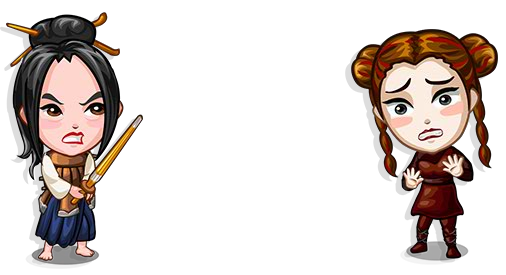 Round Prizes
You will need 140 Victory Medals and 11 Thunder Ryokucha for all prizes in this battle.
Bonus Prize Options (Select One)
Hero of Patience Pegasus Foal

Opponent Two
Toro Kawasei – He is barred from the competition because he is crazy, yet he is here, be careful.
The Bonus Prize in the  Battle with Toro Kawasei will end on June 2, 2016 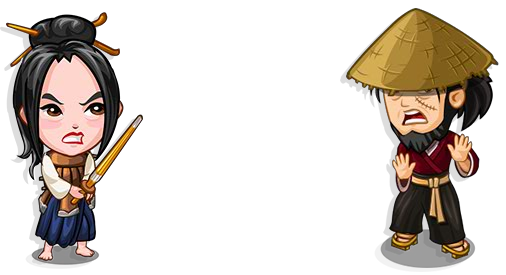 Round Prizes
You will need 180 Victory Medals and 13 Thunder Ryokucha in order to complete this battle.
Bonus Prize Options (Select One)
Feather Fantasy Pegacorn Foal 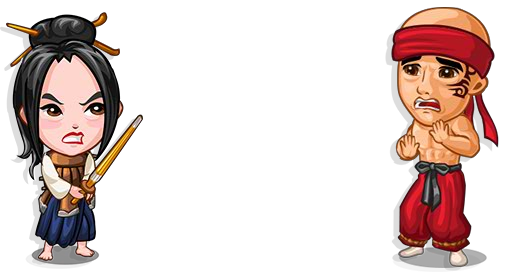 Round Prizes
You will need 220 Victory Medals and 15 Thunder Ryokucha in order to complete this battle.
Yori Foal

Opponent Four
Mishima Kozue– For him, the battle starts before you step into the ring. Be on your watch.
The Bonus Prize in the  Battle with Mishma Kozue ends on June 12, 2016 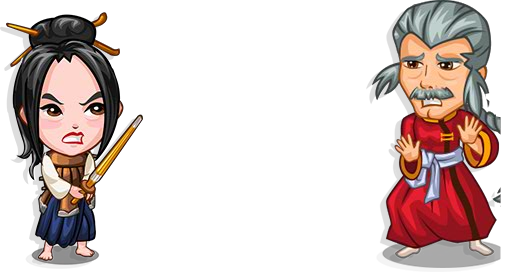 Round Prizes
You will need 300 Victory Medals and 17 Thunder Ryokucha in order to complete this battle.
Yuka Fawn

Opponent Five
Masashi– An excellent swordsman to whom winning is a matter of life and death.
The Bonus Prize in the  Battle with Masashi ends on June 16th, 2016 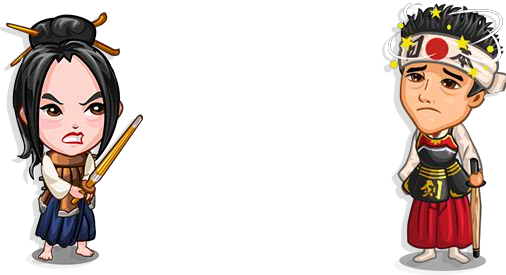 Round Prizes
You will need 360 Victory Medals and 19 Thunder Ryokucha in order to complete this battle.
Sango Fawn

Bonus Prize Options (Select One)
If you succeed you will be prompted to collect your bonus reward. 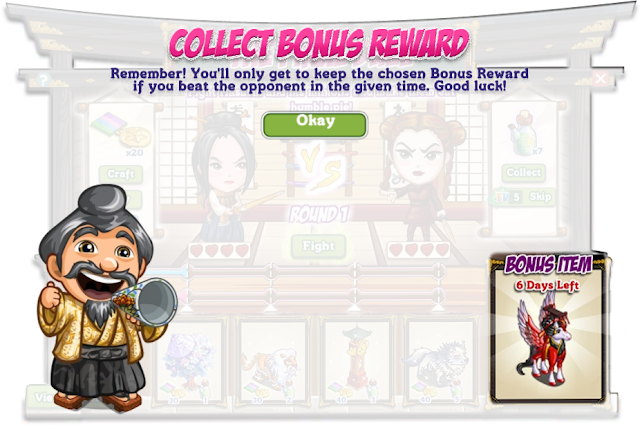 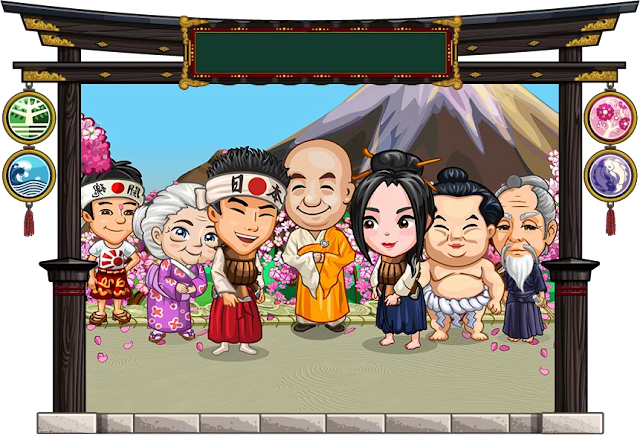 a
That's all for now, stay tuned to the Dirt Farmer for all the latest FarmVille news and information.