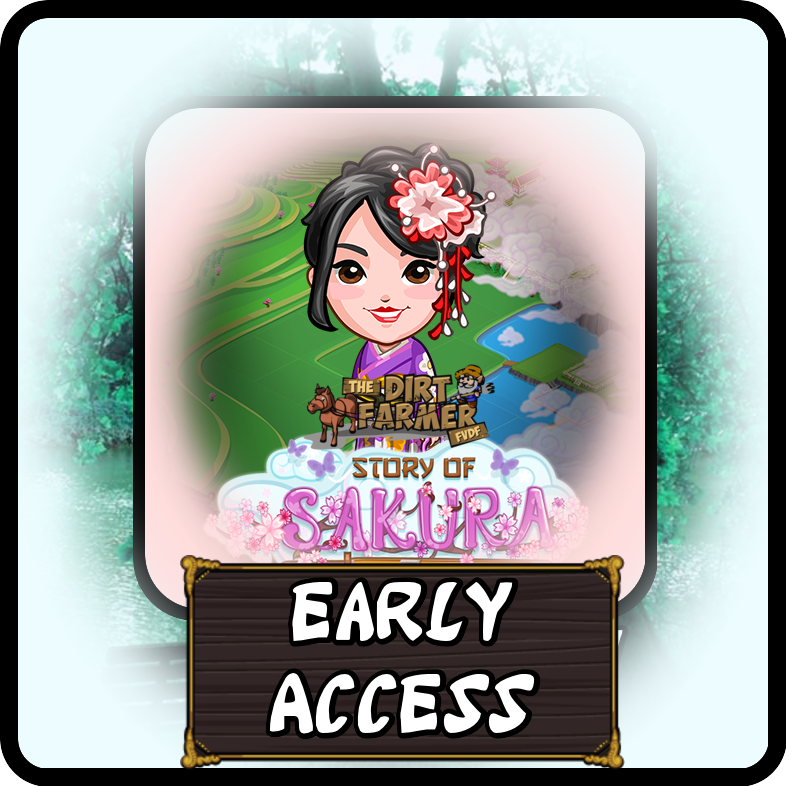 It’s new farm time again. Buckle your seatbelts because FarmVille Story of Sakura is going to be a wild ride. There will be many new elements to this farm beginning with Early Access. As we know from the event, Early Access will begin on March 14th – at least for the first time. This farm will also be longer in duration than the normal 8 weeks, a full 14 week farm. Early access will  cost 45 farm cash.  IMPORTANT NOTE: YOU WILL ONLY BE ABLE TO PURCHASE EARLY ACCESS THE FIRST WEEK OF THE FARM. IF YOU DO NOT PURCHASE AT THAT TIME, YOU WILL NOT BE ABLE TO GET EARLY ACCESS TO THE OTHER THREE REGIONS! THINK IT THROUGH AND MAKE THE RIGHT CHOICE FOR YOU. When deciding, keep in mind that the Sakura Combine costs 30 Farm Cash Separately and will work on all terrains. There will be coin vehicles for water at some point, but we do not know when they will release. We do not yet know if there will ever be coin vehicles for Zen. Without further delay, your Dirt Farmer team has a preview of all the details for you. Please share….

As we alluded to in our Story of Sakura sneak peek post , the studio has promised more value for our early access dollars this time. They promised 300 farm cash worth of for farm cash
Remember there will only be the initial week opportunity to buy early access, you will not be able to buy during the other three early access periods.
In a rather pleasant change, one of the reminder pop-ups has a “do not show this again “ option. If only all pop-ups had that so we could have just the ones we individually want. If you like this post in our  ASK The Dirt Farmer group, which the FarmVille Studio reads and let them know you would like this choice on more popups.


Now let’s have a look at how that breaks down. As you can see there will be 5 early access crops, 4 animal gifts, 2 starter packs, 2 weeks of harvest bonuses, 4 costumes and a combine. Quite a bit more than usual for our 45 Farm Cash.
Here is the twist, FarmVille Story of Sakura will have 4 regions released in 4 segments at different times. Let’s have a look at what they are. The regions are based on

Plateau of Patience which is the one that will go live on March 14th, this will  be land terrain. 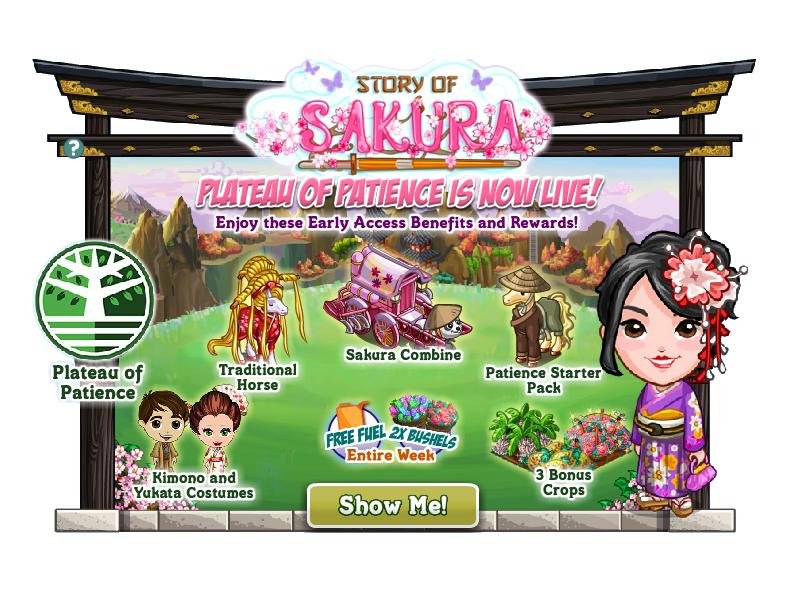 Let's take a look at the Early Access rewards for Plateau of Patience
Crops
Other Items
River of Balance which will go live on March 28th this will be water terrain. 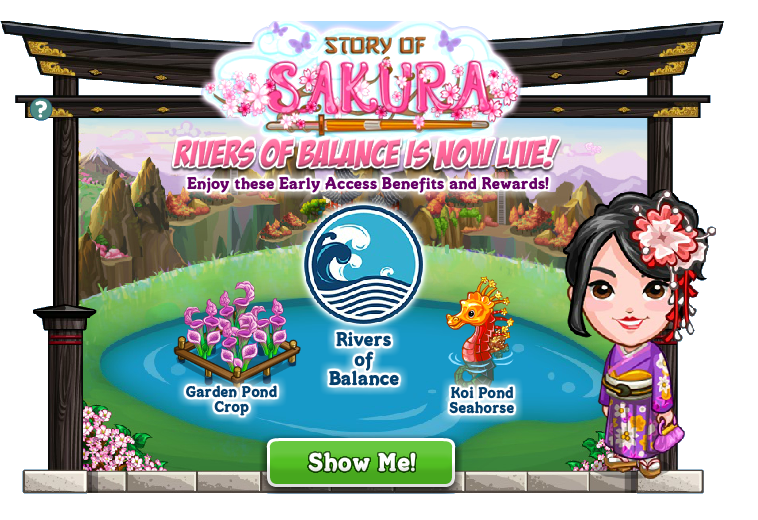 Let's take a look at the Early Access rewards for River of Balance
Crop
Gift
Mountain of Strength which will go live on April 18th this will be a combination of land and water terrain. 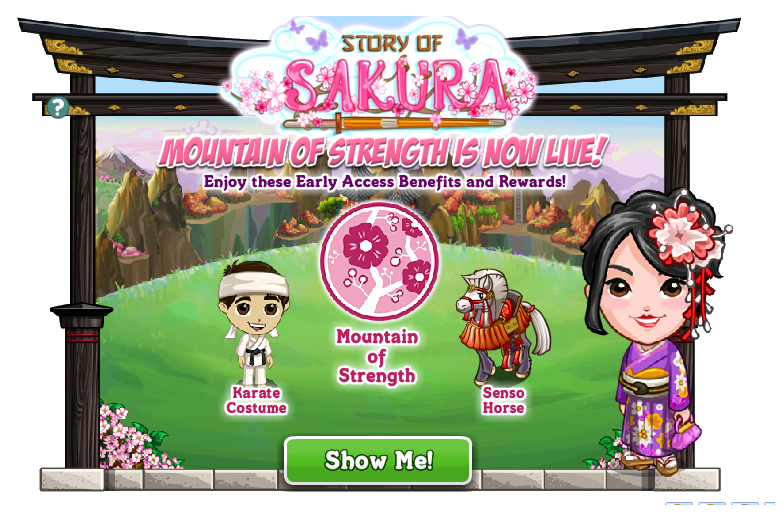 Let's take a look at the Early Access rewards for Mountain of Strength
& Zen Valley which will go live on May 16th. this will be a new terrain called Zen. 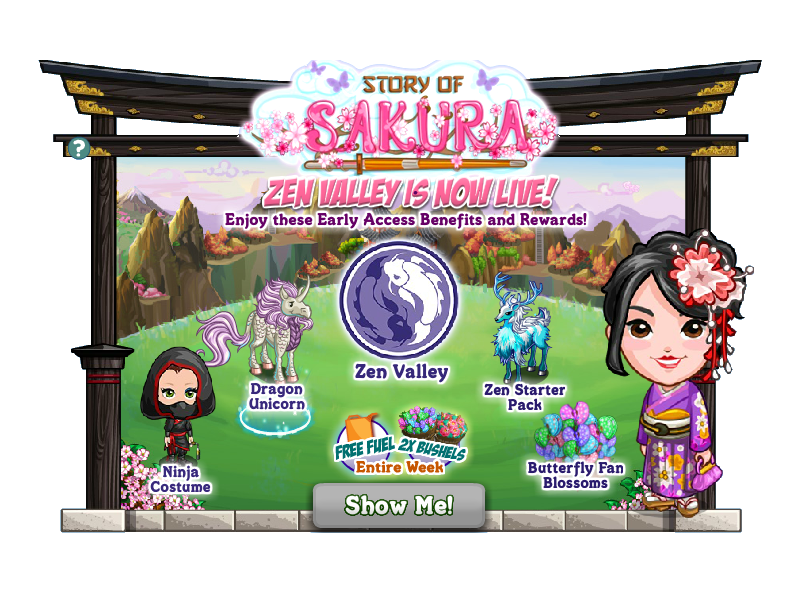 Let's take a look at the Early Access rewards for Zen Valley
This farm will last 14 weeks instead of the usual rushed 7.

You will only have to buy Early Access for 45 farm cash when the farm is released, and you will get not only the initial early access period, but early access and rewards for all 3 others included in the one price as they are released. NOTE: IF YOU DO NOT PURCHASE EARLY ACCESS THE FIRST TIME THE WEEK OF MARCH 14TH, YOU WILL NOT HAVE  ANOTHER OPPORTUNITY TO DO SO FOR ANY OTHER EARLY ACCESS PERIOD. 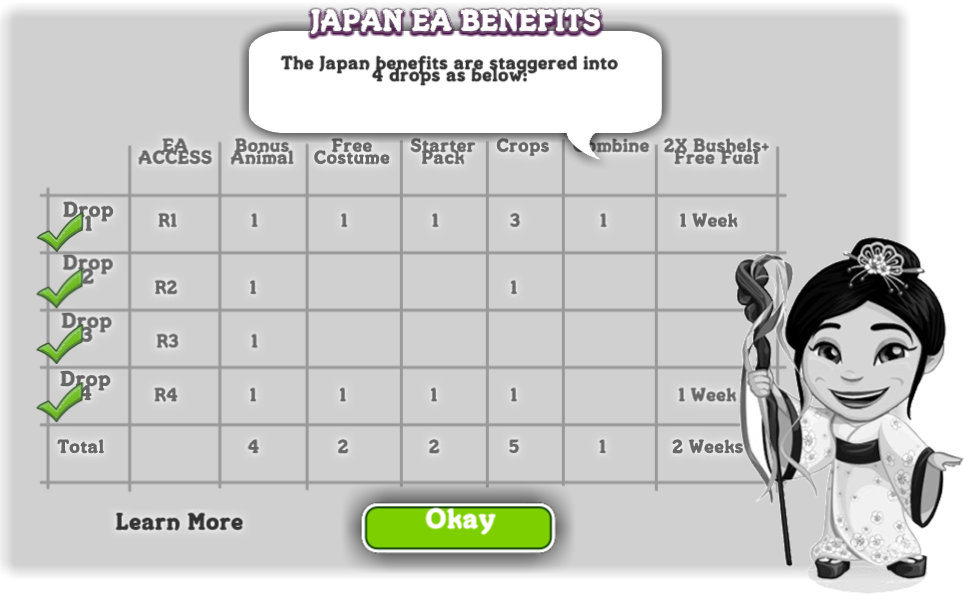 Here is a look at the breakdown and release dates for the rewards. 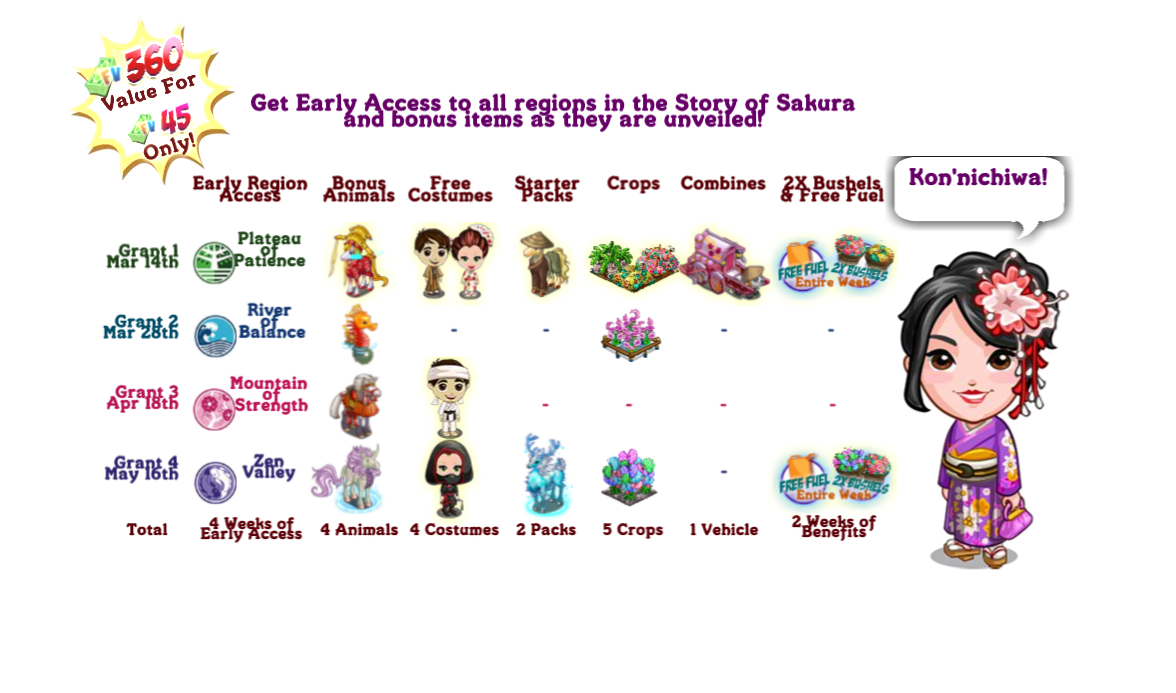 That’s all for now, more information as we know it.