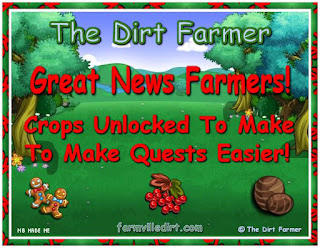 Great news farmers! The mystery of the un-locked crops has been SOLVED! Your Dirt Farmer team has heard back from the FarmVille Studio and can now give you full details on why you can suddenly plant crops that were formerly locked to farms like Lighthouse Cove and Winter Wonderland on any farm. Please make sure to read the entire guide, so that you will know exactly which crops can now be planted on any farm. Check out the details below and please share.

Recently, players were delighted to find that they could suddenly plant formerly farm locked crops such as Cove Cranberry and Gingerbread on any farm. Then worry set in.  What if it was a mistake? What if the crops were locked again? Would people be locked out of their farms?

Your Dirt Farmer team can now tell you that the FarmVille Studio unlocked the crops intentionally. They did it to make quests easier for us.  You may have noticed that many of these crops are frequently used in the crafting for all farm quests. The Studio wanted to take the burden of traveling and having to plant on multiple farms off of the players, to make it easier on you and your computers. A very nice gesture indeed.

What about the Hawaiian Paradise crops? What if I can’t plant the newly unlocked Taro on other farms? The studio is aware that many players are having an issue with this, and that it is because the crops cost coconuts instead of coins. They are working to change them to cost coins and we will update this post when they do.

Did anything else change? Yes, Mastery Pre-Requisites were removed from some all-farm crafting crops. That means that, for example, in the past, you would have to master White Grapes before you could plant Chardonnay. That has been changed so that you can plant your crafting crops regardless of prior masteries.
Complete list of unlocked crops
Note that the Water Crops will still only be able to be planted on farms with water – though now the water farm of your choice, once they are updated to cost coins instead of coconuts- again we shall update when they do.
Complete list of crops that no longer require prior masteries.