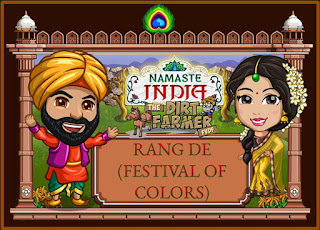 As we have told you before with the feature trailer, #Farmville Namaste India is coming soon with a brand new feature, the Rang De (Festival of Colors).. Unlike many such features, which leave us waiting to the middle of the farm, the Festival of Colors will go live with Early Access according to the FarmVille Studio. Check out the below post for a sneak peak and please don't forget to share it with your friends if you like it.

A look at the tutorial pop up

As you can see from the pop up, it looks like we'll finally be able to do something extra with the Raj Mahal (the main buildable), the Royal Kalakshetra (the self contained crafting building) and Surya Shrine (the unwither building) rewards which we receive upon completion of the buildables.. Some of these rewards will be used as a part of Rang De.. We'll be using Magic Color Bowls to help unlock colors we'll need to help these animals change color and become more lively.. We'll once again have special tiles on Namaste India when put on it, these animals will transform in color and come alive.. You'll be able to collect and buy the Magic Color Bowls.. There will be a gift of 10 Magic Color Bowls included if you purchase Early Access. Additionally the FarmVille Studio has let us know that they can be obtained from Level Up rewards on Namaste India, and Community Goals rewards.

Initially we will use the context menu on the animal to change the color (the same one we use to move or sell an item.  You can select a color of your choice from the menu. Our friends at the FarmVille Studio have let us know that once you have unlocked all 4 colors of an animal, the animal will animate through all four colors on its own when placed on the special tiles. 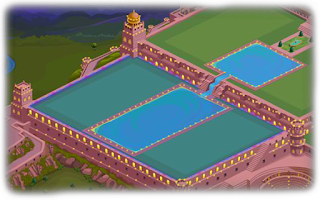 That's all we have for now... Stay tuned to the Dirt Farmer for all the latest Farmville news and info...