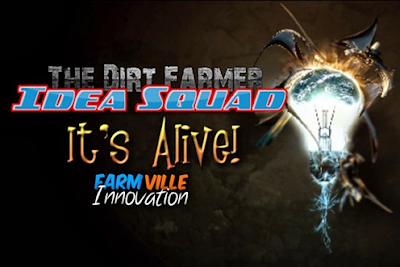 THIS IS NOT AN UNRELEASED FARMVILLE FEATURE.
THIS IS A PROPOSAL TO FARMVILLE
FROM THE DIRT FARMER


The Dirt Farmer has long been an advocate of the Farmville Player…It’s why we’re here. We listen to Players in order to communicate issues in the game to the Farmville Studio…Our goal is to keep the game running as well as possible. In recent months we have noticed that MORE needs to be done to keep the game fresh and innovative. It seems that anything proposed in recent years is CRAFT driven. Which tends to make Farmville a “one trick pony”…No pun intended.
In the early days of Farmville we seemed to be entertained the much easier. Which has led the game developers to try to one up the game basic task driven games inside Farmville…I don’t think it has to be that complicated…In fact it can be very simple…and best of all…I have an idea

I suggest a spirit of friendly  competition and mutual support…The fundamentals that made Farmville a phenomenon back in 2009.

HERE IS HOW IT WOULD WORK:
Everyone who participates in this feature will get a STARTER Show Horse. Perhaps the Farmville Studio can make it customizable like the AVATAR.
With the ability to choose different colors and paint style patterns...Manes and tails.

Once we have our SHOW HORSE…We can post once every 24 hours for a CONTEST or PAGEANT…Basically challenging our Friends to come and compete.
Players can click on someone else’s CONTEST as much as 3 times per day...or perhaps this would be limitless in order to use the principles of supply and demand to drive the interest of this feature.

Your SHOW HORSE would already be in your CONTEST…The first 4 Friends that CLICK on your contest post will also “compete” in the contest you are hosting.…Farmville would have to supply some type of algorithm to determine the winner...We suggest an XP based system with some randomness.

First place will receive a BLUE RIBBON and 5XP…Second place 4XP and so on…Even 5th Place gets 1XP…So even losing a contest helps build up the XP for future contests.
Our SHOW HORSE will grow in XP and number of BLUE RIBBONS as we compete…Giving us a source of PRIDE and FRIENDLY COMPETITION

Each SHOW HORSE will grow as it gains XP…Once the SHOW HORSE reaches 2-STAR status you will be able to BUY accessories for your SHOW HORSE that will increase that Show Horses XP and help them win more contests.
Items may include extras such as Saddles, Hats, Saddle bags and so on…It would be nice to see this become an ongoing feature and have new limited edition items appear regularly.

Then, at 3-STAR status, you can buy TALENT for your SHOW HORSE…maybe something like “dance lessons’ or “teeth whitening”
Again…The goal for adding these “talents” would be to increase XP in order to compete better.

Once your SHOW HORSE has reached 5 STAR status…I suggest something radical.
At 5 STAR you have the option to put in PRIZE MONEY to sweeten the pot of your contests…You can “invest” your own COINS as an incentive to get players to click on your contests.
Also at 5 STAR you can “rest” your first Show Horse and start a second one. And you could switch them out at any time.

Obviously this is merely a proposal…It is subject to Farmville’s will and ability to implement it. They may like some aspects we’ve discussed in this post and not others…Farmville and Zynga are welcome to the ideas proposed here
We’d just like to have some FUN in the game again…