Mastery Sign Removal From The Game What You Need To Know 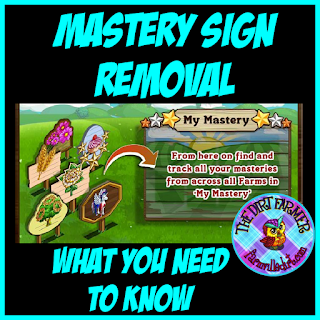 Are you confused about mastery signs being removed from Farmville? Wondering why and what it will do? Wondering what, if anything you have to do? Your Dirt Farmer team has a guide for you to all that is known about the process so far. Check out the details below and please share with friends so they may learn as well.

UPDATE 3 - MASTERY SIGN REMOVAL APPEARS TO BE IN FULL SWING AGAIN. PLEASE NOTE THAT UNLESS YOU HAD A LOT OF SIGNS OUT IN THE OPEN ON YOUR FARMS, YOU ARE UNLIKELY TO SEE MUCH PERFORMANCE IMPACT WHEN YOUR OWN SIGNS ARE REMOVED. THE IMPROVEMENT WILL COME WHEN ALL OF THE SIGNS ARE REMOVED FROM THE GAME CODE - AND THE FARMVILLE STUDIO CANNOT DO THIS UNTIL EVERYONE'S SIGNS ARE REMOVED. IF AN ITEM IS REMOVED FROM THE CODE, ANYONE WHO HAS IT WILL BE UNABLE TO LOAD THEIR FARM - SO THE REMOVAL PROCESS MUST BE COMPLETED BEFORE THE PERFORMANCE IMPACT WILL REALLY COME INTO PLAY.


UPDATE 2 : WE HAVE NOW RECEIVED AN UPDATED IN GAME POP-UP INDICATING THAT MASTERY SIGN REMOVAL WILL BEGIN ON AUGUST 31ST, 2015. THIS IS THE WARNING POP-UP AND AS YOU SEE BELOW THERE IS AN ADDITIONAL POP-UP WHEN REMOVAL IS LIVE, SO WE STILL CANNOT BE SURE WHEN IT WILL BEGIN. REMEMBER THAT AS STATED IN THE INTERVIEW THIS WILL BE A SLOW ROLLOUT AND NOT EVERYONE'S SIGNS WILL BE REMOVED AT ONCE.


First of all it is just the actual MASTERY SIGNS that are being removed. You will still be able to see your mastery of everything in the mastery tab under self contained crafting. We are not losing our masteries, nor are we losing the ability to track them.

We have received confirmation from the Farmville Studio that the mastery sign BILLBOARDS will be removed as well. So you will need to access your mastery via the mastery tab.


Currently, as pointed out by Dirt Farmer Wendy, items that are locked to one farm can only be searched on the mastery tab on that farm, leaving many items to appear to be missing. Farmville Executive Producer Srivatsa has confirmed for us, that once the mastery signs have been removed, the full mastery sign user interface will be available across all farms and you will be able to search anything from anywhere.

UPDATE: Thanks to Farmer Erin in our ASK The Dirt Farmer group, we at DF were made aware that level 2 trees currently do not display in the "My Mastery" tab if the player does not own the level one. We reported this to the Farmville Studio and they are currently working on ensuring that all trees display in the "My Mastery" user interface, however they don't yet have an ETA for completion and it is unlikely that mastery sign removal will be delayed until this process is completed. We shall update you on a time frame when the FarmVille Studio updates us.

Why are they doing this? To improve game performance. Many players experience slowness, freezing and lag and flash crashes. This is due to the amount of memory that the game requires, currently rendering it very difficult to play on older computers or even new computers with less RAM.  The studio is doing this to help those players play more easily.

If your mastery signs are in a billboard currently, not scattered out on the farm, then you do not have to load the GRAPHICS for each one when you load your farm and that saves some memory - BUT they are still using some of your resources, and depending on how much RAM you have it could significantly impact your ability to play.

Each time you load your farm, the game must check the game code for every single item that exists in it to determine what you have on that farm . Currently there are roughly 70,000 items that the game has to look for every time you load every farm and determine which you have. approximately 22,000 of these items are mastery signs. Removal of mastery signs will reduce what your computer is looking for by almost one third - and this will have a significant impact on how easy your farm is to load and play. 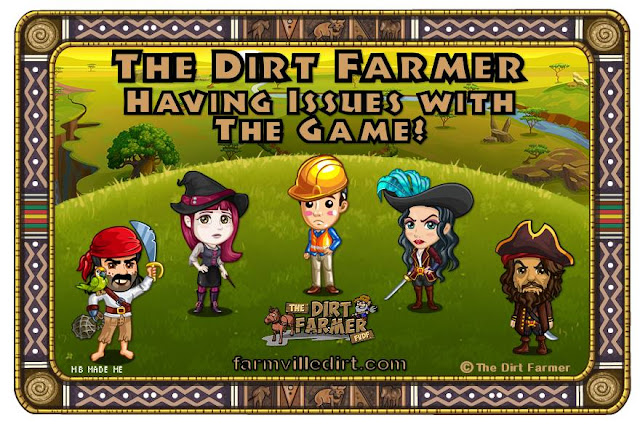 What do you have to do ? Nothing. The game will take care of removing the signs and billboards for you.

Will it be a surprise? No. Farmville Executive Producer Srivatsa stated that we will get at least a weeks notice, and then it will be a slow rollout to squash any bugs before it rolls out to everyone. They will also remind us where to find and check our masteries.

Prior to mastery signs being removed, we will get the following pop-up to warn us. This currently states that they will be removed on August 31st but that is subject to change, as with all unreleased information in Farmville. The pop-up has shown up in game, until they start removing signs, the feature remains unreleased. 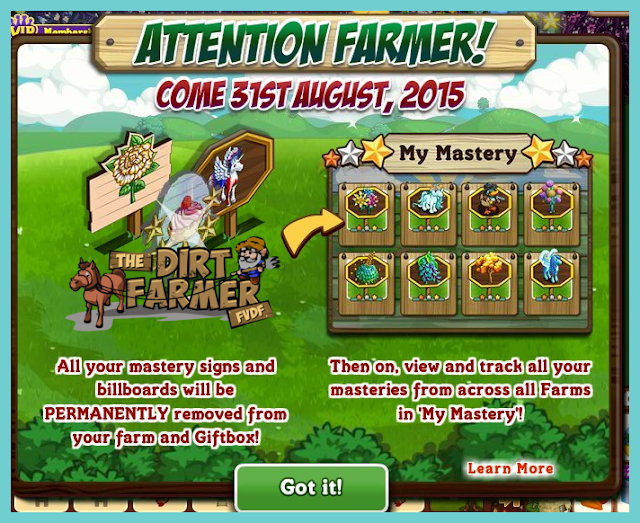 Once they have been removed, we will get the following pop-up reminding us where to find and track our masteries. Remember in the e-mail pictured above, Farmville Executive Producer Srivatsa said there would be about a week duration between the warning pop-up and actual removal.

Notice that there appears to be some gift that the game will give out after removal. The Mastery Sign Bundle will contain the following and will be added to your giftbox


Now let's walk through the FAQ from the Farmville Page on Zynga Support.

The first question confirms that this is indeed true and mastery signs and billboards will be removed.

The second question confirms the reasoning - the fact that they occupy a lot of memory and impact game play. In the below question "World Locked" means locked to one farm. 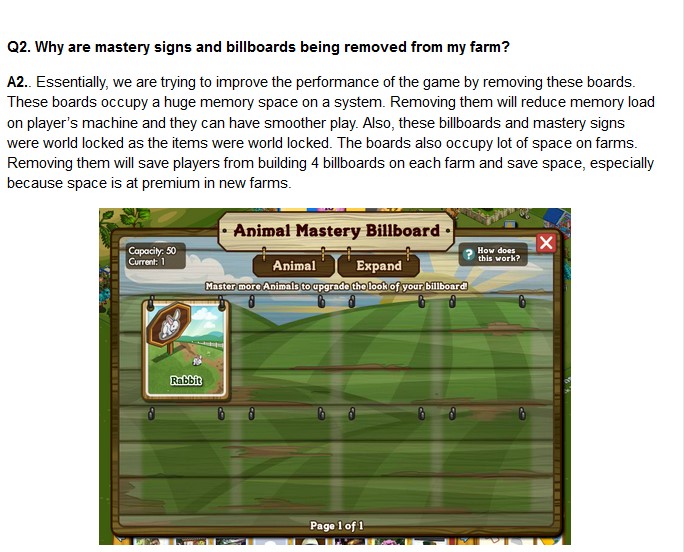 Question 3 reviews the current/prior use of signs and billboards.

Question 4 confirms that all masteries will remain intact. It is just the placeable signs that are being removed.

Question 5 demonstrates how to access your masteries in the future. (Multi tool bar section essentially means click on the little box with the image of self contained crafting for the current farm on it.) 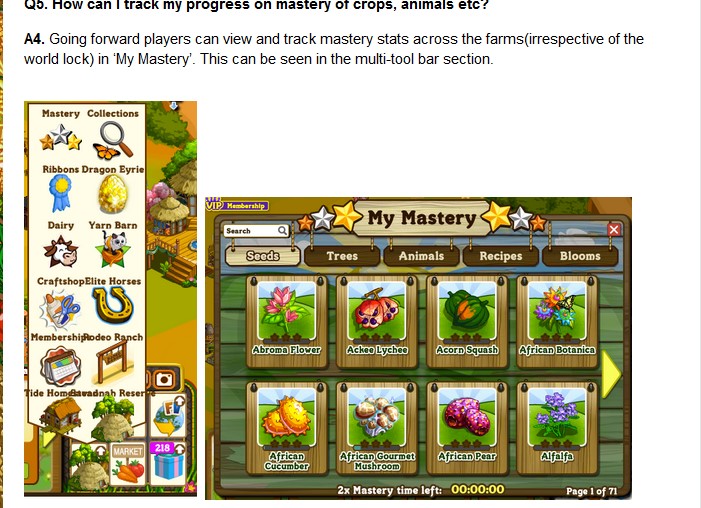 Question 6 indicates that mastery signs will no longer be added after August 31st, but does not specify exact removal dates.

Question 7 details and confirms the contents of the gift package that will be given when signs are removed. 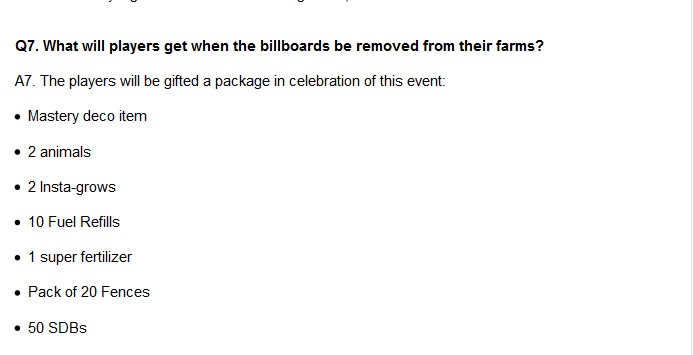 Continue reading to view the discussion on the topic from our Dirt Farmer LIVE! Farmville Studio interview in July. For the full transcript of that interview click here. To listen to the podcast, click here.


Farmville Executive Producer Srivatsa - let me start off by saying the primary reason why players are seeing performance related issues in the game, it's because of the memory that is required to run the game on the player's machines. Right.  This is especially true with players who have slightly older computers and are more likely to face these issues.  So what we are doing is focusing on this specific area on memory needed to run the game, with some urgency.  And we're making some changes that will reduce the memory needed to run it.  To talk about a couple of  changes that we're looking at currently one we are planning to remove mastery signs from the game.  Players will still be able to see the mastery level of all the items they have mastered just that we will not have separate mastery signs.  This is expected to reduce the memory needed to run the game by a large extent.  We are also looking at cleaning up some of the old quests and the game that are expired, cleaning up some of the items that are no longer being used.  This should free up some additional memory.  Now all these changes will take time to roll out we expect that it will roll out within a month or so.  After that players should expect to see improvement in the game just in terms of the slowness and the freezing and the lag.


Farmville Executive Producer Srivatsa - Not to get into too many details because it's still under design and implementation, but nothing is expected from players in terms of manual actions, it will all be done by the game, but we will definitely give players significant heads up before we start doing it.

Dirt Farmer Heather - okay that's good to know because we don't want them wondering what's going on what's going to happen where their mastery signs went.


That's all for now. Stay Tuned to the Dirt Farmer for all the latest Farmville news and information.