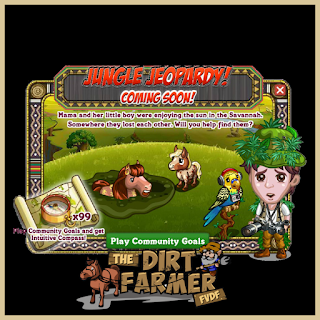 It looks like Zynga’s Farmville will soon be releasing a new feature to our farms called Jungle Jeopardy. This feature is currently coded to start on 10th August, 2015 and end on 9th September 2015, which is a little longer than they usually give us for features. The feature is already visible to tease us at the edge of our farms. We will be putting together a rescue team to  a little horse find his mama, after he gets lost romping in the Savannah Safari Sun. Mama Horse has stumbled into quicksand and is in urgent need of our help! The mysterious Intuitive Compasses that will be rewarded in upcoming Community Goals tasks will be used for this feature. Check out the details below and please share if you find our post helpful.

NOTE: WE HAVE RECEIVED CONFIRMATION FROM THE FARMVILLE STUDIO THAT THE 15 ADDITIONAL INTUITIVE COMPASSES THAT WE NEED TO COMPLETE THE FEATURE WILL BE AVAILABLE VIA SUBSEQUENT WEEKS' COMMUNITY GOALS OVER THE 28 DAY LIFE OF THE FEATURE.

A look at the pop-up that we will get to preview the feature. The Intuitive Compass Component will be won via Community Goals. The Calling Whistle will be craftable.
The next screen gives away a little more information and a hint at likely prizes – we will be forming a rescue team.
A high- resolution image of the feature which will be located at the edge of our farms.
Now a look at the prizes and requirements.

If you complete the feature and earn all of the prizes, then you will be rewarded a bonus prize. The Jungle Jeopardy pack which will include both the little horse and his mama
The Little Horse will not show in your gift box as Little Horse. It will be named Pentaflower Mini Horse

A look at the offspring of the feature rewards

As mentioned above the Calling Whistles will be craftable. You can craft 1, 3 or 5 at a time

A look at the pop-up that you will get when you get a prize.
Finally a look at the congratulations pop-up when you complete the feature.
That’s all for now, stay tuned to the Dirt Farmer for updates on this feature and all the latest Farmville news and information.