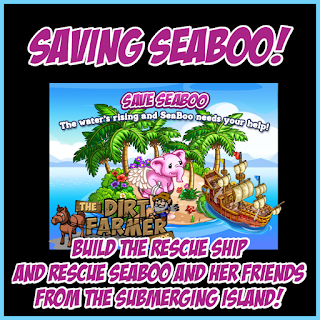 Farmville and Zynga will soon be releasing a new spin on Wandering Pirate and Lost Reindeer This new map based feature, called Saving SeaBoo will consist of winning 4 animals from each of 4 chests and completing the map to earn bonus rewards. This one involves a rescue operation. The island is submerging and SeaBoo and her friends are trapped! It is our job to build a ship to rescue them and sail them off to safety. Each time we complete a set of animals the map piece will give us ship parts. Once we have completed all 4, the ship will be built and SeaBoo and her friends will escape to safety. SeaBoo herself will be so grateful that she and the rescue ship will move into our gift boxes to become permanent residents of our farms. Check out the complete guide below and please do share with friends if you find our post helpful.

First a look at the high resolution animation of the pop up we'll receive inviting us to help SeaBoo and her friends escape the submerging island.
This feature will have ALL NEW REWARDS. There will be 16 BRAND NEW animals to win across the four areas of the map. If we complete all four and win all 16 animals, we will also win SeaBoo herself and the Rescue Ship as bonus prizes.

Just like the Pirate Ruby in the Wandering Pirate, you will be able to find the icon for the feature at the outside edge of your farms.. You will need to lure the animals with Healing Potions. You will be able to obtain Healing Potions by posting to the feed, collecting from friends posts, crafting them or purchasing with farm cash. Several options for every taste. There will be a countdown timer within the feature to let you know how long you have left to complete it.
Now a look at the reward screen. Here we will see which prize we have won after trading our Healing Potions as well as how we are progressing toward the rescue of our imperiled pachyderm friend.

Once you have enough Healing Potions you will be able to lure the animals by clicking on the Lure for 20, 30, 40 or 50 button depending on which part of the ship you are working on.. Once you add the potions, you will receive one of the 4 animals in that set of rewards...


Once you complete all animals for a set of rewards, you will be granted a piece of the map and parts to build the ship


As you complete each set, you will receive a new piece of the ship and get closer to completing it to receive the bonus reward


A look at the craft that is associated with this feature. The Healing Potion. Similar to several prior all farm and farm specific features, it looks as if there will be 3 different Healing Potion recipes, one for 1 Potion, 1 for 3 Potion and one for 5 Potion.

NOTE: WHILE EACH OF THESE RECIPES REQUIRES A CROP LOCKED TO TREASURE TIDES, THE REQUIRED BUSHEL QUANTITIES ARE ALSO SIGNIFICANTLY LOWER THAN AVERAGE. MOST FEATURES THAT ALLOW YOU TO CRAFT 5 OF SOMETHING AT A TIME REQUIRE 5 OF EACH BUSHEL TYPE. TO MAKE HEALING POTIONS, YOU ONLY NEED 2 KRAKEN BLOOM BUSHELS.


As with Wandering Pirate and The Lost Reindeer, Saving SeaBoo will have 4 different set of rewards... Each set will have a common, a special, a rare and a super rare reward which you will be able to redeem for a certain amount of Healing Potions... Below you can find the set of rewards listed according to the amount of Healing Potions you will be needing for each set...


Now  the bonus prize for finding all of the map pieces and completing– you will get to keep SeaBoo herself and the Rescue Ship she sails to safety on.

NOTE: WHILE YOU WILL RECEIVE THE SAME PINK WINGED ELEPHANT THAT IS CALLED "SEABOO" IN THE FEATURE AND ON THE ISLAND, SHE WILL APPEAR AS "KING ELEPHANT" IN THE GIFT BOX.

AS OF THE ENHANCE ON 24TH JUNE, THE NAME IN THE GIFTBOX AND ON THE FARM HAS BEEN CHANGED TO SEABOO 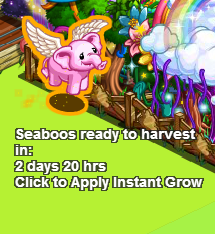 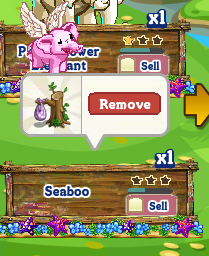 Finally a look at the offspring of the possible rewards