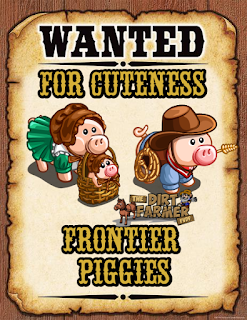 Zynga Farmville is planning a brand new twist on MYSTREES..  The Farmville Frontier Piggies…   This feature will be our fourth version of MYSTREES (though not part of a BEAT event) with a little twist, like Cupid’s Stable. The MYSTREE aspect will be raising the Frontier Piglet into the many varied possible adults. The twist/story on this one is that your piglets will need Sasha’s magic to find their true personalities.  This feature is currently coded to start on 11th May, 2015 and end on 4th June, 2015 , but as we know, it could show up at any time... Check out our  Dirt Farmer post for more info and a sneak peek at the images we have found and please don’t forget to share it with your friends if you find it helpful.


There appears to be a bug in this feature,  all but two of the piggies are tracking incorrectly in the "my shack" area where you track what you have grown so far. The Cowboy Piggie and Farmer Piggie will show the correct animal within "My Shack" when you grow them. All of the others will show a different animal when you look inside as shown below. We have reported this to Zynga and are awaiting a reply.


AS OF THE SECOND  ENHANCE ON 12TH MAY, 2015 THIS HASBEEN FIXED AND YOUR PIGGIES WILL NOW DISPLAY CORRECTLY. WITH THE SAME ENHANCE THE FEATURE HAS BEEN EXTENDED FROM AN END DATE OF 1ST JUNE, 2015 TO 4TH JUNE, 2015, SO WE WILL ALSO HAVE 3 ADDITIONAL DAYS TO COMPLETE IT. 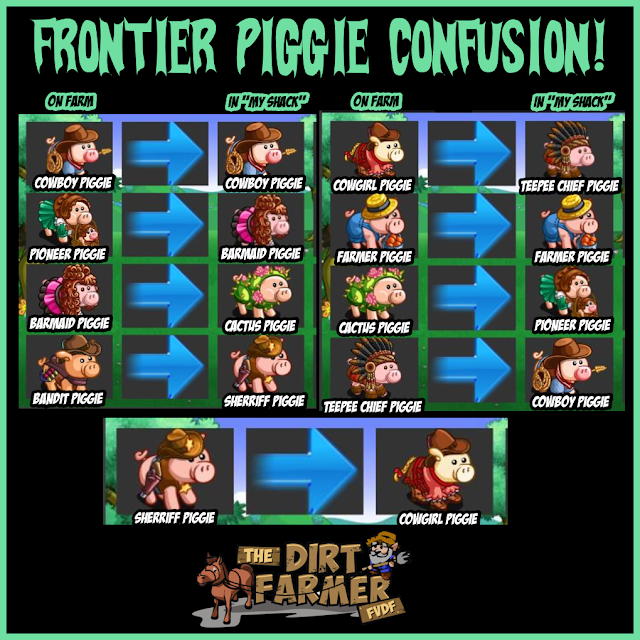 A hint at exactly what the Frontier Piggies will do – and a look at the pop-up that we will receive when the feature is released.

A look inside the building

A look at the reminder screen to get more cornmeal…

We’ll be needing Cornmeal to earn the rewards of the Frontier Piggies.. We will  collect the Cornmeal by crafting, asking from friends and collecting from the news feed. Since this is still an unreleased feature we don’t have any definite info as of yet but we’ll be updating our post accordingly as and when new info becomes available.. For now let’s take a look at the Cornmeal

A look at how many Cornmeal you will need to tend to each Piglet to raise it into a Frontier Piggie.

A look at the recipe to craft Cornmeal