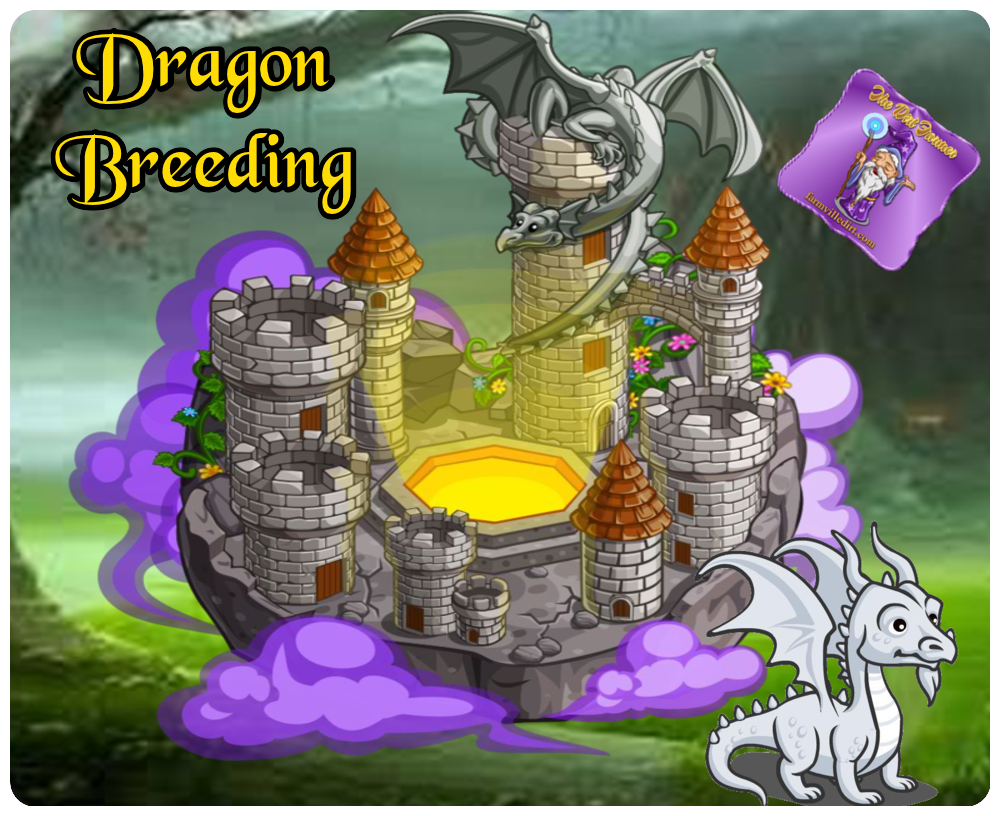 It looks as if the long awaited Dragon Breeding feature will soon be released and will be a MYSTREE based feature. Check out the preview we have for you below and do let us know what you think of this feature. Please share…..


The Farmville Studio has prepared a RUNDOWN of this feature. The print is small on their images, but you can view it here. For The Complete Dragon Family Tree Click here. For the Zynga Support Site's Dragon Breeding FAQ click here 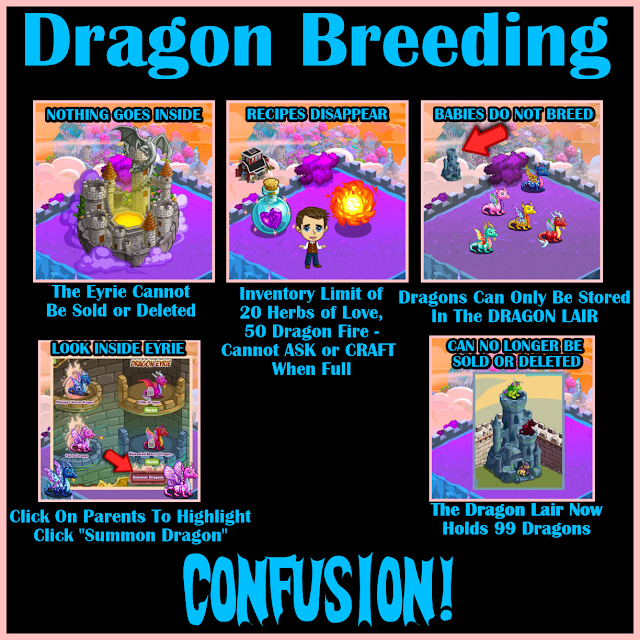 AS OF THE ENHANCE ON 25TH MAY, THE DRAGON EYRIE CANNOT BE DELETED ONCE PLACED, MAKE SURE YOU DO NOT PLACE IT ON A FARM WHERE YOU ARE PRESSED FOR SPACE.

AS OF THE ENHANCE ON 27TH MAY, THE EYRIE CAN NOW BE DELETED. 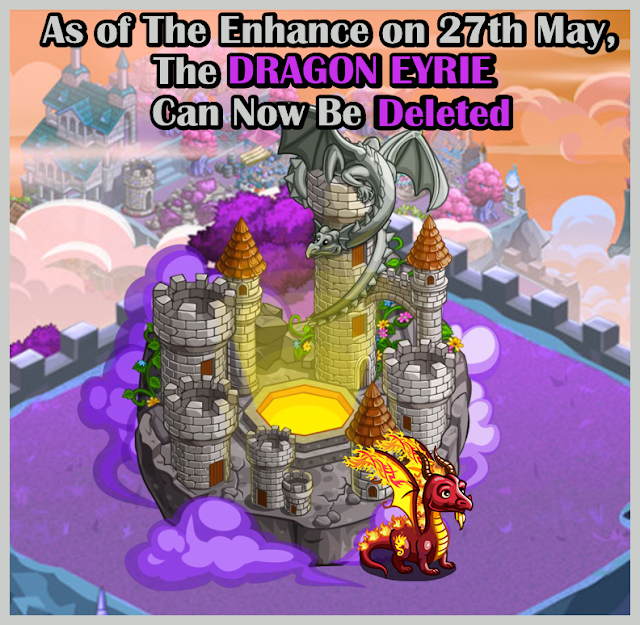 YOU CAN STORE YOUR BABY DRAGONS IN THE DRAGON LAIR ONLY, NO OTHER ANIMAL PEN. THE ABILITY TO STORE THEM IN THE ZOO PREVIOUSLY REFERENCED HERE WAS REMOVED IN AN ENHANCE PRIOR TO RELEASE.

YOU CAN HAVE A MAXIMUM OF 20 HERBS OF LOVE AND 50 DRAGON FIRE WHICH ARE STORED IN THE EYRIE NOT THE GIFTBOX. IF YOU ARE AT THE LIMIT OF AN ITEM, YOU CANNOT ASK OR CRAFT IT (PLAYERS ARE REPORTING THE RECIPE DISAPPEARS)

First a look at the introductory video

A look at the tutorials for this feature.

Now for the feature guide,  The below pop-up indicates that we will be selecting two dragons as parents, adding Herbs of Love to select the breeding time as we did with Love Potions then selecting a random outcome (The RANDOM is DIFFERENT than other Mystree features, each breed guarantees a unique animal so you only have to breed each pair 16 times to get all 16 offspring) or guaranteed pattern for 5 FC.

To acquire the Herbs of Love that you need, you can post for them every 6 hours (clicking to send to a friend gives you one as well), craft them in the craft shop or purchase them for farm cash.  Each Herbs of Love recipe that you craft makes 1 Herb of Love and is ready instantly .

When you pair the parent dragons, you can see a specific and limited set of possible outcomes or offspring  .

When you breed 2 dragons you get an egg, you are then able to send out one of the parents to the feed. The one you send out will not affect your own ability to breed the same dragon , and will allow a friend who collects it to breed that dragon as a visiting parent in their own Eyrie for two days. You cannot share anything with your friends that they can keep.

This feature has a set pattern of results, as all the other mystree based features do. You will not be able to use older dragons or alter pattern/color combinations beyond what is in the Eeyrie. The babies are not breedable, only the dragons designated as parents.

Once you  "Lead the parent dragons to the Snuggery and let them breed!"  then the female will lay an egg in your snuggery for you to raise. While the prior pop-up appeared to indicate a baby dragon, the game code indicates that that’s not the case. Instead you get an egg that you will need to raise with Dragon Fire. You can post for Dragon Fire every 6 hours or craft it in the craft shop or buy it with farm cash. Each Dragon Fire recipe that you craft will make one Dragon Fire and take 2 hours to craft.

Dragon Breeding raises the eggs in the fashion of MYSTREES, with multiple tends and waiting periods in between. You will wait 15 hours to raise each dragon from its egg if you do not wish to pay farm cash to speed it up. It will take 27 Dragon Fire to raise each egg into a dragon.

There are 16 possible combinations from each set of parents. The mystree aspect of the feature yields a different randomized odds, with each breed guaranteeing a unique dragon so you breed a parent pair 16 times and get all 16 possible offspring from that pair.

The mystree aspect of this feature also means that there will be limited nests within the Snuggery screen of your Eyrie that you can raise eggs in. You will not be able to breed new dragons if all of your nests are full, you will need to wait to finish raising them. The code indicates so far that there will be 5 total plots. This popup

indicates that some will be unlocked as we level up the feature. There will also likely be at least one for Farm Cash so we are not likely to have more than one or two at start.

If mastery is your passion, this feature will give you a true challenge. The harvest numbers for full 3 star mastery range from 750 to 6,720. The only way to get additional offspring is to breed them through the feature, because in a rather odd twist, despite the fact that the offspring go into the zoo pen, they are coded to give the old dream horse foal as a baby reward.

The dragon offspring will go into the Dragon Lair and give scales instead of going into the zoo.

It appears that there will be 30 levels in the Dragon Pen.

Now for a look at the parents, one is cash only and there should be one to start with, the pop-ups above indicate that the rest will unlock with levels and when we see which we shall update this post. It appears that each dragon can breed with each opposite sex dragon for a variety of specific results as seen above. If the pop-up holds true there will be 16 possible babies per pair of adults.


That’s all for now, stay tuned to the Dirt Farmer for more information as and how it becomes available.