Farmville Avalon The Kingdom Farm Treasures and Parts By Expansion 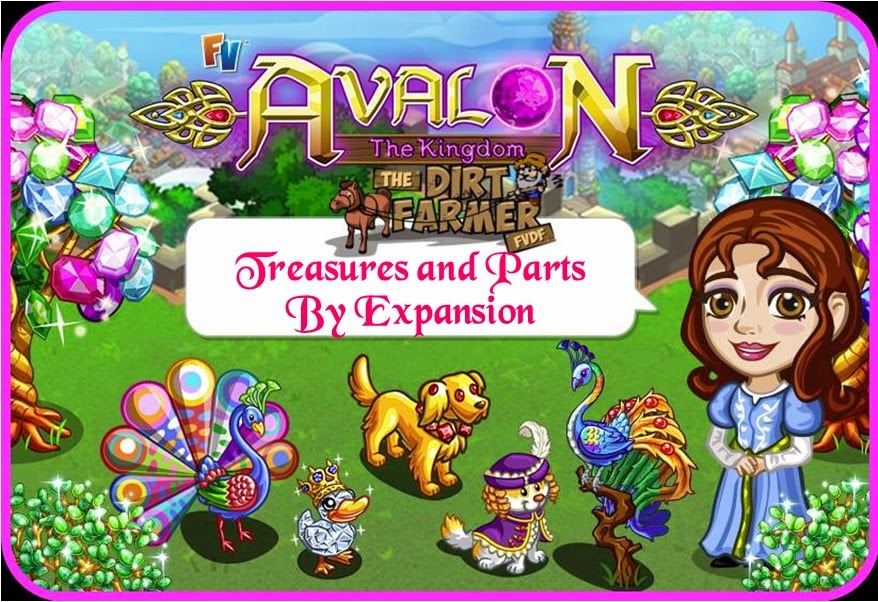 We have been informed  that Zynga is planning to release Avalon The Kingdom farm for the the next expansion  for Farmville. We have found some images of this upcoming farm’s treasures.. For now have a look at The Dirt Farmer post for a  hint as to what the new treasures on the new farm will look like and how many parts you will need to open them, depending on how far you expand.

Like every other farm, we’ll have 4 different types of treasures.. it looks like they will be in a varied medieval   themed

Now for a look at the parts that you will need to open them. There are two new parts – The Royal Amulet and King’s Chalice


Below you will find a series of tables – the first listing the quantities of each part by expansion and the second and third listing cumulative parts for the different cliffs respectively. As the expansions are now squares, the treasures will be listed by the expansion name and not a size.
IF YOU NEED HELP DETERMINING WHICH EXPANSION IS WHICH, VISIT THE DIRT FARMER'S LAND EXPANSION GUIDE HERE.

Now, for those that want more details, we have two additional charts, that will list the cumulative material requirements till a particular expansion by cliff on the Farmville Avalon Wilderlands Farm… Check it out too…
Lower Cliff

(Note these are the expansions that will unlock via the questsIf you wish to earn these by unlocking, but would like more room, you can purchase any or as many of the expansions on the top cliffs right away and wait to unlock these. The three cliffs are independent.

Note: since the lower cliff is the only one that can only be obtained in a specific order, as well as the only ones that unlock free, here is an additional table indicating HOW MANY MORE OF EACH PART YOU WILL NEED  from and including that expansion to the completion of all free ones. It would not be possible to provide this information for the upper cliffs as you can expand them in any order, thus it would take many tables and create more confusion than it resolves.  Thanks to Farmer Peter for the idea….
Upper Cliffs
Note: The upper cliff allows you to expand in various directions. The cumulative totals on this table are only valid if you opt to expand in the order listed in the table. This table counts ONLY parts needed for the upper cliff, as the base farm parts are included in the lower cliff table


If you were going to purchase  and or unlock if possible every single expansion on the farm, on both cliffs, then you would need 310 Royal Amulets and  980  King’s Chalices