Farmville and Zynga will soon be releasing the all new  Bring Back Winter Feature. We will be helping Zing and Zang on their quest to do exactly that by collecting items daily, posting and collecting from friends and earn some neat Winter themed prizes in the process. This will be another hybrid feature, the combination of a collect and redeem event with a Community Goals twist. This feature was released briefly on 26th December and the information herein is accurate for that version. The feature was pulled bck for improvement due to community feedback, so anything within may change prior to re-release. Check out the details below and please do share with friends if you find our post helpful.
The premise appears rather simple. The back story is that Jimmy is up to his usual tricks and has managed to filch winter. Here is a look at the pop-up that we will get inviting us to play this feature.

It looks as though all that we will have to do is log in daily to collect an item, as we have been with Daily Delights  –this pink snowflake and post for the other 3 colors and collect them from our friends. There is also a community goals element to this feature-  more on that later

A look at the rewards for the collect and redeem aspect of this feature. Note that if you log in all 14 days to collect your Cheery Pink Snowflake, then you will have enough of the pink to redeem all rewards. It currently looks as if you can miss a day or two, but this may change when it is released.The other colors will depend on how many you collect from the feed and your own posts. You will need a combination of the listed number of each type of snowflake to redeem each reward


These rewards will not be in the market, you will need to access the feature via the icon on the right side of your farm to redeem them once the feature is re-released. 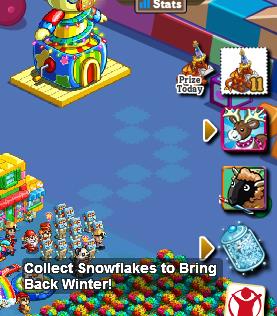 You will also post for your blue, green and white snowflakes via the same icon. As you can see from the messaging on the feed post, you should also get one each time you help a friend. 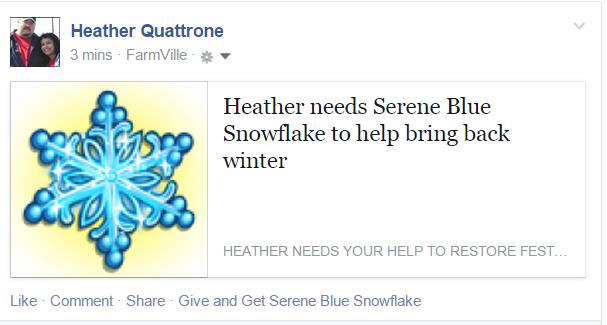 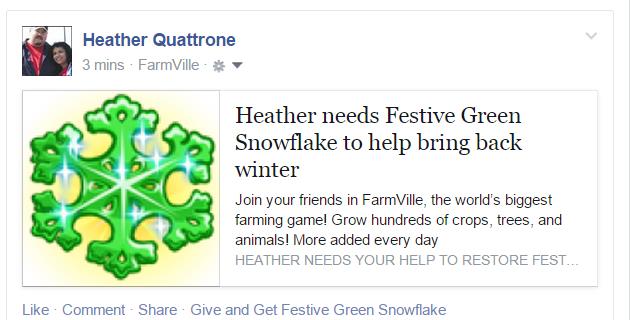 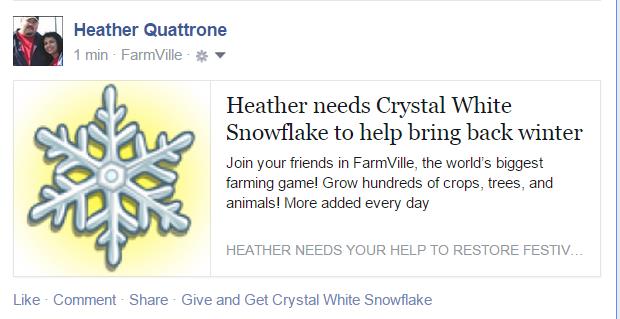 A look at the tasks and rewards for the community goals aspect of this feature
This will be a 2 week task, not a 1 week task as community goals have been in the past
Community Task – collect 75,000,000 snowflakes (all players combined)
Each player must collect 200 to be eligible for rewards

A look at the reward pop-up for community goals.

That’s all for now, more as we know it. Stay tuned to the Dirt Farmer for all of the latest Farmville news and information.