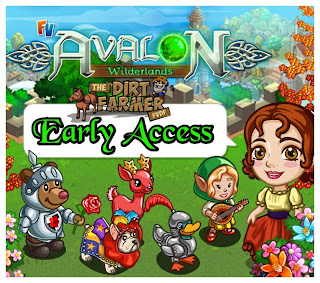 Like most new farms, Farmville’s all new Avalon Wilderlands Farm will have an early access period, beginning on 12th January, 2015. We expect it to be one week in duration, ending on 19th January, 2015 and the cost will   be 45 Farm Cash. This will be a new and innovative experience in farming, with the crops planted and animals raised on a series of cliffs Remember from our Interview with the Farmville Studio team that this will be a 2 part farm with the second set of cliffs on the same farm Avalon Kingdom, being released several weeks out at the normal time we would get a new farm. Sounds like a unique adventure to us. There will be an exclusive quest line and gifts to go with it. Check out the details below and please do share with friends if you find our post helpful.

and an Elemental Tree

You will also receive a bonus costume, depicted in the "buy and go" popup above

That’s all for now, Stay tuned to the Dirt Farmer for all the latest Farmville news and information