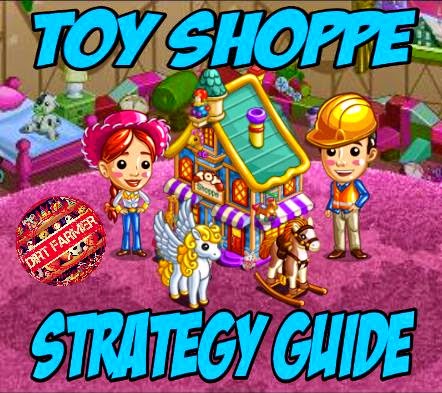 As with the last several farms, Farmville Magical Toy Town has it’s own self contained crafting building, the Toy Shoppe. This feature is similar to Elite Horses and you will need to make all 15 animals within to BEAT Magical Toy Town  We have a strategy guide for you to make the feature a little less complex and help you to finish it faster. For the complete guide to the Toy Shoppe click here.  For a strategy guide to the rest of the beat Magical Toy Town event click here. For the Complete guide to the Magical Toy Town click here.  Please do share our post with friends if you find it helpful.
GREAT NEWS FOR THOSE OF YOU WHO STRUGGLE TO GET BUSHELS AND/OR HATE CRAFTING EXPANSION PARTS. AT THIS TIME INITIAL CAPACITY ON THIS FEATURE IS 10 STOCK ROOM (RECIPE) and 15 SILO (INGREDIENT) . A LITTLE LESS THAN LAST TIME, BUT WE WILL TAKE IT, ALL OTHER EXPANSIONS EXCEPT THAT PESKY LAST ONE THAT REQUIRES 24 CRAFTED EXPANSION PARTS TO MAKE ROOM FOR JUST ONE MORE RECIPE WILL BE AUTOMATICALLY GRANTED BY FINISHING ANIMALS PRIOR TO WHEN YOU WILL NEED THEM. THE OPTION TO CRAFT PARTS REMAINS FOR THOSE WHO LIKE TO SAVE PARTS AHEAD, BUT YOU CAN DEFINITELY COMPLETE THE FEATURE WITHOUT ADDING A SINGLE PART YOURSELF. CONSIDERING THAT IT IS ENDLESS TEDIOUS REPEATS OR 256 BUSHELS PER EXPANSION, THIS WILL BE A HUGE TIME SAVER AND STRESS REDUCER ANOTHER BIG WIN FOR SHAILESH AND TEAM.  (Once again with this farm there is a bug that has the final needed expansion coded after a non-existent 16th animal recipe, your Dirt Farmer team will let Zynga know about this and let you know what they say. )


First a look at how much storage you will need in your   Toy Mould (Crafted Item Storage) and   Toy Trunk (Ingredient Storage) to make each animal.

Remember that to unlock additional stations, you will need to make the first animal, making and remaking recipes will not accomplish this.
Below you will find the following charts
Storage needs by animal
Longer crafting time part needs by animal
Total crafting times and quantities needed for all animals of the longer term recipes
Time difference per animal between the Toy Shoppe and the Blackjack Barn and Magic Garden or other prior features, since the Toy Shoppe represents a significant increase in time and difficulty from the Blackjack Barn which was already harder than the prior ones. We will be contacting Zynga about this too in hopes of change to make it more doable.

The recommendations to comfortably make parts ahead take into account crafted ingredients needed to craft other ingredients for the current animal and leave a few left over spaces to store long term items that you are making for future animals. If you can expand further, it will be easier. (If you are crafting  expansion parts and have a stockpile of Super Fertilizer from the "Get 2" weekend, use it on the necessary crops to get your bushels more easily)

Even though the individual animal requirements for Ingredient  stored items are low, equivalent storage is recommended as later crafts use many of the Embossed Paper, Plastic Hammer, Walnut Paint Brush, Microfiber Cloth and Furniture Polish and you will want capacity to harvest and store those every time you look inside the building.

Minimum storage is the lowest expansion that can hold sufficient parts for that animal.
If you are looking to complete this feature in the least amount of time possible, you will want to begin making the 10 hour ingredients when you first get the feature and look ahead to the 6th animal and begin making the 6 hour plus ingredients by animal #3 and keeping them on hand. 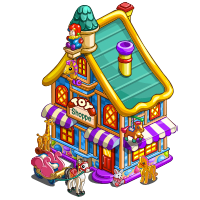 There are two ways to expand your storage units. One, by crafting the parts in the Craft shop (See the Craft Shop Guide for recipes.) The second way is to make one or two animals over and over (Soft Plushie Horse is quickest and easiest) to get the 2 random expansion parts granted by each animal upon completion. As the parts are random, the latter method may be time consuming. There is a difference with the Toy Shoppe as opposed to all prior buildings, except the Barn, Garden, Stallions, Hideaway, Emporium and Fountain , though. All parts are weighted at similar item chance, with the only oddity being the Toy Hinge at 25% to the 37% of Wheel Spoke and Toy Rope. The items for the other side are weighted equally, instead of some at 50% and some at 10% so it may be easier than usual.

There are two strategies you can follow to complete the animals in the Shpppe. One is careful management of resources, which will allow you to complete them with lowest expansion capacity possible. This way may take a bit longer as you cannot store many items ahead.
The other is making parts ahead and squirreling them away for when needed. That will allow you to complete the feature faster as you will complete more parts within same wait time by utilizing all machines at once. It does require more crafting and expanding. Which you opt for is up to you.
If you opt for the crafting method it is wise to focus on mastering the required crops first, as you will need a total of 224 -240 bushels, depending on which side  to make all of the parts for one expansion on either side. For tips on mastering the crops faster, check the Beat Magical Toy Town Strategy Guide.

The following chart shows which parts by animal  are the ones that take the longest time to craft. This includes anything that it’s own craft time, plus craft times of ingredients required for the recipe is 2 hours or longer. these are the ones you will want to make ahead and store before you reach that animal to save yourself the maximum amount of time as you progress. Since the animals in the Toy Shoppe have fewer 2 hour ingredients and more time required to craft, we have included the 2 and 4 hour recipes this time.   Any crafted sub-ingredients for the recipes listed in the Toy Shoppe Complete Guide that take 2 hours or more to make will be listed in this table along with the required ingredients. You can also save time by pre-crafting the sub-ingredients before the longer term machines are done.  If you have additional space visit the Toy Shoppe  Complete Guide and get ahead on the other recipes as well.


Finally as mentioned above the Blackjack Barn is different from the prior animal making self contained crafting. You will have to babysit it far less, as the 24 two hour recipes in one animal for example are a thing of the past. The downside is it takes longer to complete each animal. The heavier usage did not result in a decrease in quantity of ingredients needed except by one on one animal and two animals actually require one and three MORE crafted ingredients respectively. Depending on your play style and how often you tend the self-contained crafting buildings, you may not even notice a difference as your recipes will now take longer and instead of being done and waiting for you, it might just be getting done as you get back. If your style is to watch it and click it the minute it’s done, the time increase may drive you crazy. To give you an idea of what to expect we have a time completion by animal chart for you to compare the Magic Garden (which was roughly even with all prior animal crafting features) to the Blackjack Barn. This chart presumes that you use all machines at once and get shorter term crafted ingredients ready for the next recipe before it is time to turn over the machine. If you do not, it will take longer. For the purposes of those in a hurry to get one specific animal, or complete the feature to beat the farm, this will help you plan your time. Of course you can also spend somewhat less than the listed times on some animals, if you have the space, plan ahead and have some longer term ingredients ready when you get there. Total Completion time for the Toy Shoppe is a whopping 448  hours or 19 days if you collected every recipe as soon as it’s ready.Total completion time for all animals on the Blackjack Barn was  352 hours or a little under 15 days if you collected every recipe as soon as it’s ready. Total Completion time for Magic Garden under the same conditions was 9.52 days. While collecting right when it’s ready is not realistic, we have to sleep sometimes, that will at least give you an idea to compare your own experience with. Time difference per animal between Blackjack Barn and Magic Garden or other prior features.