UPDATED  WITH FULL INFORMATION ON HOW THE FEATURE WORKS. SPECIAL THANKS TO OUR NEWEST TEAM MATE DIRT FARMER ERIC, FOR THE IMAGES AND INFORMATION CONTAINED HEREIN ON HOW TO PLAY THE FEATURE.  There’s something for everyone in the rewards for this feature including NEW CROPS, ANIMALS, TREES and a 6x6 COMBINE & the return of some golden oldies. Bob’s Berry Farm turns out to be something completely new… Choose your difficulty level, collect and redeem – but as a market currency, not a basket -  and multiple ways to earn the berries. Check out #TheDirtFarmer post for a look at the images we have found and please don’t forget to share it with your friends if you find it helpful
TO VIEW THE NEW REWARDS ADDED ON 16TH JANUARY 2015 CLICK HERE

UPDATE: THANKS TO YOUR VOICES ON THIS THREAD IN OUR ASK THE DIRT FARMER GROUP, BOB’S BERRY BARN HAS BEEN EXTENDED UNTIL 4TH MAY,2015. AS MENTIONED IN OUR EXCLUSIVE INTERVIEW WITH THE FARMVILLE STUDIO ON THE DIRT FARMER LIVE ON 4TH FEBRUARY, NEW REWARDS ARE PLANNED AS WELL.

UPDATED 7TH JANUARY, 2015 WITH INFORMATION ABOUT THE NOW-RELEASED BERRY CROPS.

Before this feature was coded, your Dirt Farmer team got some EXCLUSIVE information for you, regarding how it will work, courtesy of our contacts at the Farmville Studio. Now that it has been coded, scroll down to see specifics on the difficulty levels.

As you can see from the second flash image below, you will be able to CHOOSE the difficulty level at which you want to play this feature, to earn your berries and redeem them for prizes. We have learned what exactly those difficulty levels are.

First a look at the high resolution animation of the pop up we’ll receive…
It looks as if you will be able to choose how difficult you want the feature to be
A look at the building which we’ll be placing on our farms
As you can see we will be collecting BERRIES to redeem for prizes. The BERRIES are coded as a currency, so once the feature is released to you, you will see prizes redeemable for berries in the market, when you click on the berry icon.
Now a look at how the feature works -  Images and information on the functionality of the feature courtesy of DIRT FARMER ERIC
You are assigned tasks depending on the difficulty level that you select. If you opt for EASY, your task will involve harvesting crops only. You will be rewarded two berries upon task completion. If you opt for MEDIUM, your assigned task will involve both harvesting crops and crafting.  You will be rewarded 6 berries upon task completion. If you opt for HARD your assigned task will look like a normal quest step with a feed post, crops and crafting. You will be rewarded 10 berries upon task completion.  Pro Tip from Dirt Farmer Eric – you can post as soon as you complete a stage and get a new stage, no waiting between stages. The below image is of a task at the HARD LEVEL. 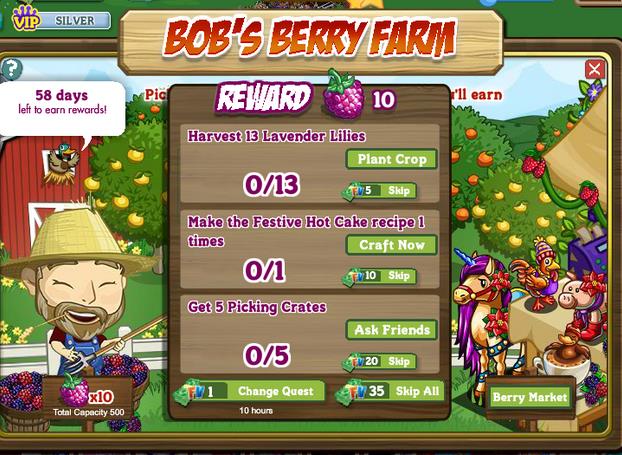 As you can see there are buttons to open the market, open the craft shop and also one to  open the Berry Market to redeem any berries that you may have already accrued in the lower right. The time remaining until the event expires is prominently displayed in the upper left. Your currently accrued berries display in lower left, note that the most you can have at a time is 500. 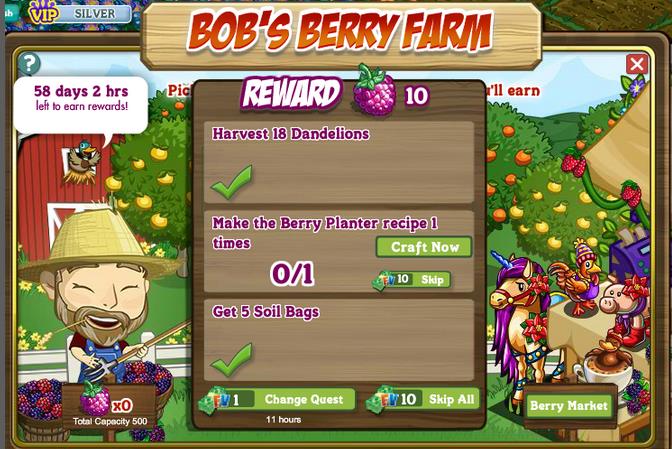 If you do not like the task that you are assigned, you can change it to a new one for free once per day.  Additional changes cost 1 Farm Cash each. The time until your next free change is displayed below the “change quest” button. Thanks to Farmer Mooshki of our ASK the Dirt Farmer group for the tip that you can change your difficulty level with the change quest button as well.

When the task is completed, you will receive a pop-up indicating the number of berries that you have been granted, and with a redeem button to take you to the berry market should you want to spend them immediately. Your total current berry  balance will display below the rewarded amount. 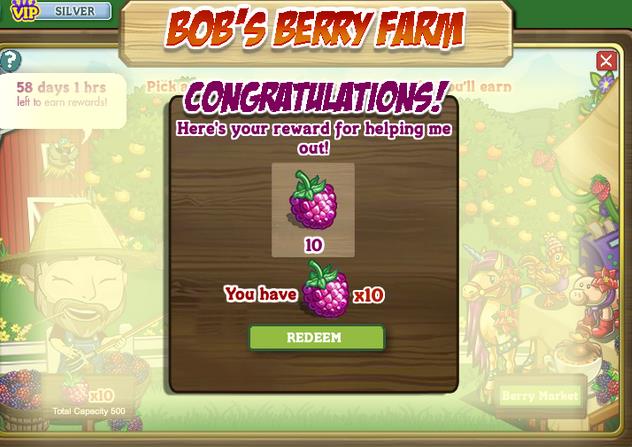 As mentioned the recipes are in the craft shop 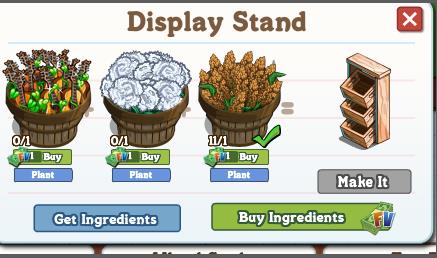 And a look at the Berry Market in it’s entirety

UPDATE 7TH JANUARY, 2015 THE TAYBERRY AND DEWBERRY CROPS ARE NOW IN THE BERRY MARKET WITH THE BERRY PRICES OFFERING A LICENSE TO PLANT THE CROPS FOR 60 DAYS FOR COINS.
There is one rather curious bug in this feature. When the feature rolled out, harvested crafts from this feature went into the gift box and stated that they were “Locked to Mystrees” with the use button greyed out. There was one attempt to fix it the day after release, changing it to  “Locked to Berry Farm” as locking an item in the way that they did  locks it to an actual farm, not a feature  and neither of these are farms, it still cannot be used. We do not know what if anything you will be able to use it for when it is fixed correctly.

Strategy and Tips – Courtesy of Dirt Farmer Eric and Farmer Mooshki of our ASK the Dirt Farmer Group.

For more information and discussion visit this thread from Farmer Jon in our ASK the Dirt Farmer group. 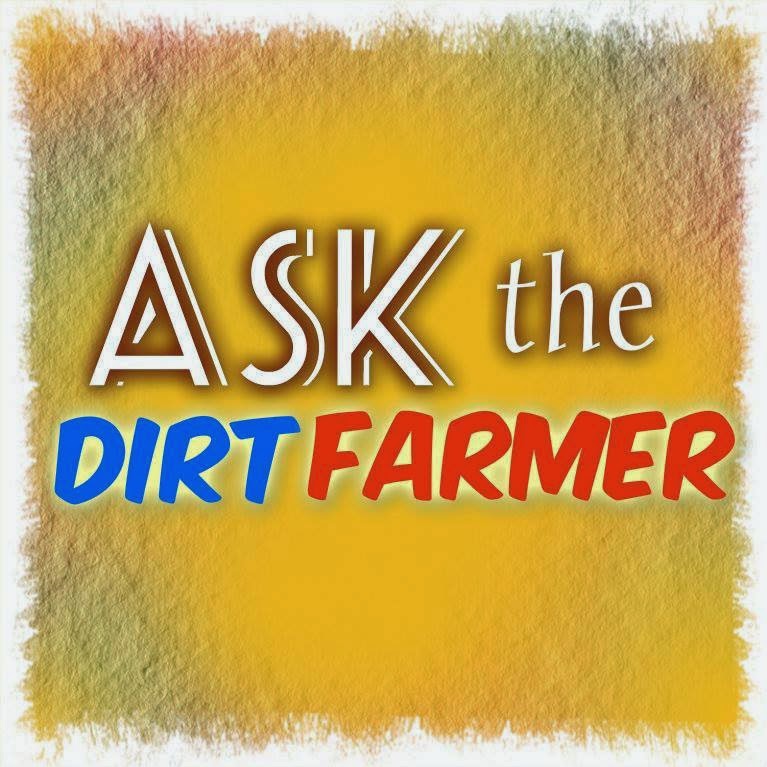 If you opt for the EASY difficulty, you will earn your berries simply by harvesting crops with no additional effort. While only certain crops will offer berries, there is a fairly long list to give options. The table below outlines all of the crops that can be assigned to you in tasks at the Easy level. Unfortunately, Zynga has hidden the steps and order, so we cannot confirm a task pattern and it will be impossible to pre-plant for this feature. Most of the frequently used all farm quest crops are included. It may actually be possible to complete this feature by accident if you do all farm quests. There will be assigned tasks that you will be asked to do as you go through the feature, but again it’s common quest crops for the most part and could happen by accident. EASY REWARDS 2 BERRIES PER ASSIGNED TASK.

Note that all of the crops that you can get berries from if you opt for the EASY level are also used here, but you need to harvest more plots for each assigned task that you get. Also note that the MEDIUM difficulty level has additional crops that will yield berries as well, that those opting for easy will not be assigned or receive berries from. You will be given assigned task boards with tasks to complete and will not have to keep track of which crops do and do not count, this is just an informational table to let you know which crops may be used in the quest.  You receive your 6 berries when you complete the entire assigned task, both crops and crafting stages. Unfortunately, Zynga has hidden the steps and order, so we cannot confirm a task pattern and it will be impossible to pre-plant or pre-craft for this feature.

As we know the MEDIUM difficulty level will also involve crafting. As you can see the recipes have low bushel requirements, and use the crops that you need to grow for the harvesting portion of the task. There is nothing to indicate that the longer-term recipes will give more berries, we will need to wait for release to see. You will be given assigned task boards with tasks to complete and will not have to keep track of which crops do and do not count, this is just an informational table to let you know which crafts may be used in the quest .  You receive your 6 berries when you complete the entire assigned task, both crops and crafting stages. Unfortunately, Zynga has hidden the steps and order, so we cannot confirm a task pattern and it will be impossible to pre-plant or pre-craft for this feature.

If you opt for the HARD difficulty level your HARVESTING and CRAFTING tasks will be exactly like those on the MEDIUM difficulty level. You will also have a variety of items that you will need to POST TO THE FEED to ask your friends for help with.

You will be given assigned task boards with tasks to complete and will not have to keep track of which crops or crafts do or do not count. The tables above simply let you know which you may need to plant and how many would be required for a stage.

You receive your 10 berries when you complete the entire assigned task, both crops and crafting stages as well as acquiring 5 of the post-for items . Unfortunately, Zynga has hidden the steps and order, so we cannot confirm a task pattern and it will be impossible to pre-plant or pre-craft for this feature.