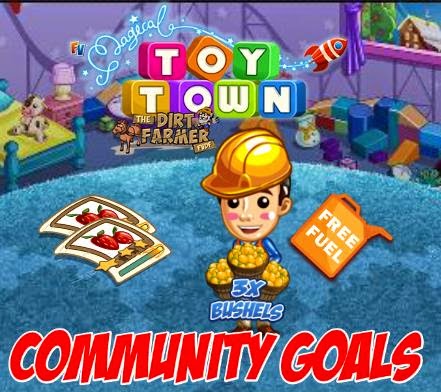 It looks like Farmville and Zynga have a new hybrid twist on a feature up their sleeves and coming soon to our farms. The COMMUNITY GOALS feature which seems to be a much requested social experience. This appears to  be a farm specific leaderboard, similar to the ones we had on Mystical Groves,but with a twist in which the entire Farmville Community works together to achieve a goal. This involves global interaction –WEEK THREE ADDED!. Your Dirt Farmer team has a guide for you to the new feature.. Check out the details below and please do share with friends if you find our post helpful.

REMEMBER THE 15,000,000 IS A GLOBAL GOAL FOR ALL FARMVILLE PLAYERS COLLECTIVELY. YOU PERSONALLY WILL ONLY NEED TO COLLECT 100 TO BE ELIGIBLE FOR THE PRIZES IF THE COMMUNITY AS A WHOLE MEETS THE GOAL. THIS HAS BEEN CONFIRMED BY ZYNGA IN OUR ASK The Dirt Farmer Group.

This feature will  renew weekly, have a progressive chain of prizes that unlock as we progress toward the goal. It will track your individual contribution towards  the global goal,  and offer a final prize if the goal is met. 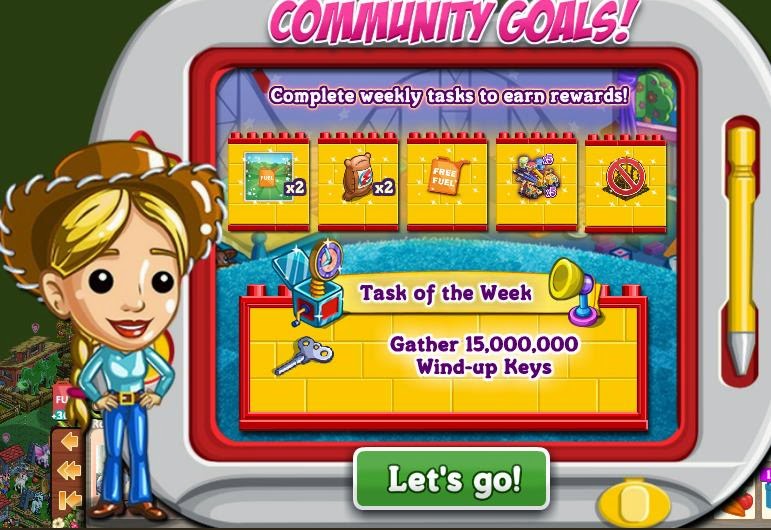 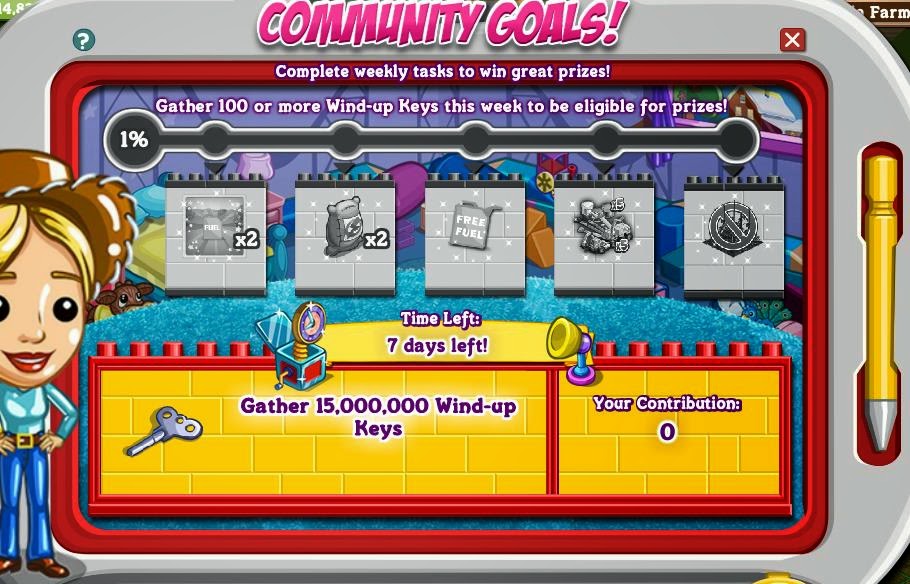 There will be 5 stages per week. Each stage goal will offer a prize.  The awarding of prizes will vary in the 5 stages with some being based on the player achieving a set goal and the community as a whole  achieving the set goal. Which levels are player and which are community vary by week.

Tasks will vary, with one set task per week with varying goal stages. Tasks include harvesting a specific crop or collecting items such as the Wind Up Keys you use to open presents in the Tower Of Pranks on Magical Toy Town. We know that Wind Up Keys,  that come from crops will count in this  feature. Those crafted count well, as tested by Dirt Farmer Tammy Jo.

Now a look at the tutorials for this feature.

A look at the pop-up we will get when the feature is released,
and the interface we will use to interact with it.
and the one that will show results when a week is complete
Week 1
10th November, 2014 through 16th November 2014
Task : Collect Wind Up Keys On Magical Toy Town


Week 3
24th November, 2014 to 1st December, 2014
Task : Harvest Toy Shoppe Animals (This means harvesting an animal you made out on the farm or in a pen)
Individual Player Contribution to be eligible for rewards is 10
Total Community Goal is 1,000,000
The easiest way to do this, if you have avoided this feature to date would be to make a few of the first animal and place them in a pen


Week 4
1st December, 2014 to 8th December, 2014
Task : Make Toyland Recipes (This means crafting in the Toy Food Van, while we cannot confirm this, odds are strong that, as with quests, recipes will not count until harvested)
Individual Player Contribution to be eligible for rewards is 20
Total Community Goal is 5,000,000
If you participate in quests and leaderboards, any Toy Food Van recipes required by those will also count.
Finally a look at some of the prizes  associated with this feature.
Note:  Confirmed, No Wither means that your crops do not wither for 1 week. We are not sure if this prize will be exclusive to Magical Toy Town or cover all farms.

That’s all for now, stay tuned to the Dirt Farmer as we shall update this post when more information becomes available.