Zynga Farmville has just rolled out a brand new feature for the Farmville Fairytale Fields Farm called Jack’s Mystree Nursery.. Check out The Dirt Farmer post for more info and please don’t forget to share it with your friends if you find it helpful.

If you  bought the Early Access for the Fairytale Fields Farm, you probably noticed a building that said Coming Soon on it when you scrolled over it.. It is the main building for this feature.. Now that the feature is live, instead of coming soon it  says Jack’s Mystree Nursery

When the feature is released to you, you will receive the following pop-up inviting you to travel to Fairy Tale Fields and investigate. 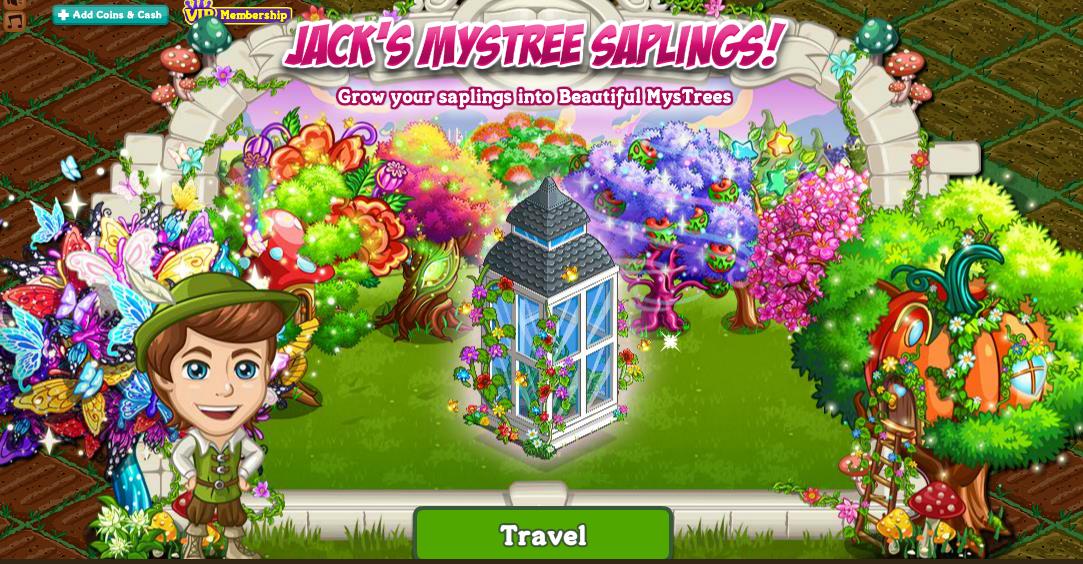 When you first click on the building, you will see the assortment of trees available along with spaces for how many of each you have collected to date. 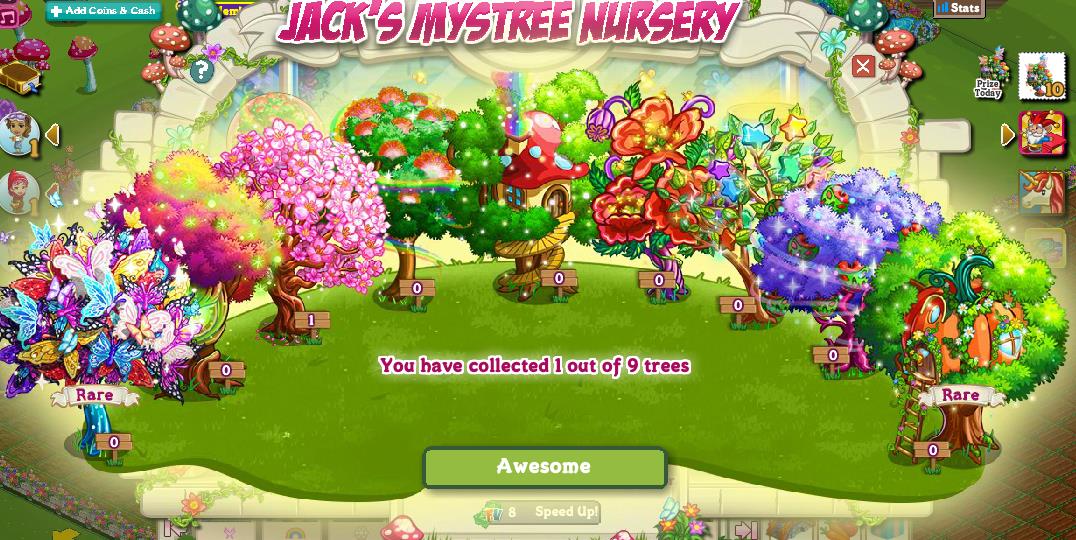 Once you have played the feature for a while, if you wish to see how many of each you have made, you will be able to access the above screen at your convenience by clicking on " View" under "My Grove"

Here we have a look at the tutorial images for the feature:

This feature offers a new way to obtain and raise saplings to turn into different trees.

Once you’ve planted these saplings, you’ll be able to use Sunshine Buckets to raise them. You can either buy or craft these in the craftshop:


To craft them, simply click on "craft" from within the feature.

or search or scroll for them under the "consumables" tab in the craft shop.

The Rainbow Butterfly ingredient is one that you must post to ask your friends for help. You can ask via posting every 6 hours or swap for them via the BUSHEL SWAP feature. 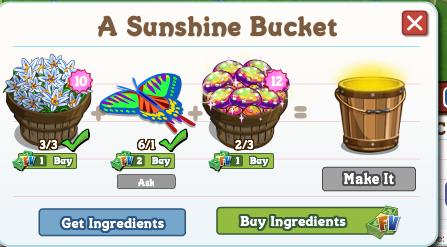 You can also obtain Rainbow Butterflies by clicking to help friends on their posts from within the craft shop or clicking on their posts when they complete a mystree. 5 players can claim from a craft shop post, 3 from a tree complete post. There appears to be some sort of limit on getting them from helping, as many players are not receiving any beyond the first few clicked. 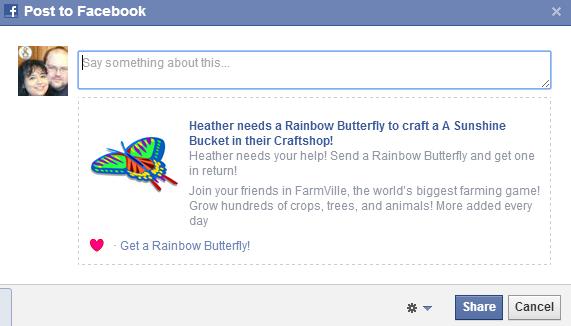 As mentioned above, you  can also swap for Rainbow Butterfly bushels via the BUSHEL SWAP feature. 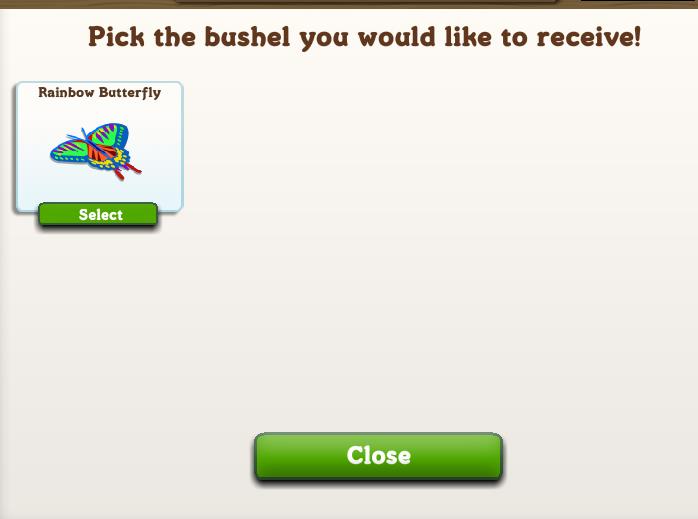 BE CAREFUL TO ONLY POST OR CLAIM FOR AS MANY AS YOU NEED. The Rainbow Butterfly is in the UNSHAREABLE BUSHEL class, so you can't delete them and they can affect your bushel swap. You will need to use all you have by crafting, or at least use enough to not hit that limit.

If you opt to purchase them, apparently in bulk is the only option. There does not appear to be a way to get just one more if you are short, other than paying 10 Farm Cash to finish a craft shop recipe early. 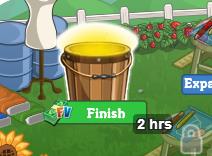 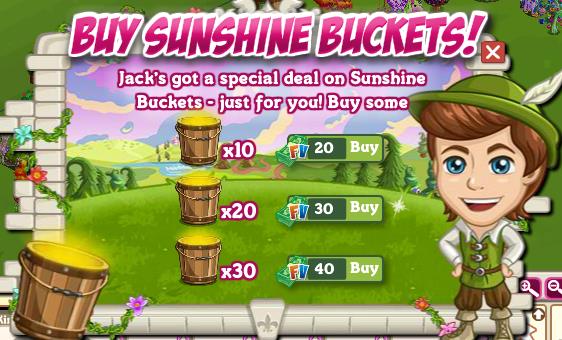 Below we have the crafting recipe for the buckets:


When you get the feature you will have 3 Sunshine buckets in your gift box greyed out. This is because you must use them from within the feature.

You will have one sapling planted, at stage 5 of 6. The stage the sapling is currently at and how many sunshine buckets you will need to tend it will be displayed in the lower left of the sapling's patch. You cannot tend a sapling until you have ALL of the sunshine buckets needed to take it to the next stage, so you will need to craft 1 more in addition to the ones the game gifts you in order to tend the one waiting in the first slot. 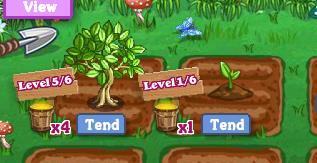 Alternately, you can simply click "plant" on any other patch in your grove and add additional saplings. There does not seem to be a coin or farm cash cost associated with this. You could tend 3 level 1 saplings to level 2 with the gifted sunshine buckets and wait on the other until you have more crafted. You do not have to have saplings to click plant, you obtain them by doing so. 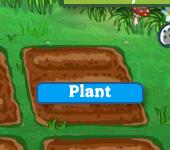 There is also a waiting period in between the ability to tend most of the sapling stages from level to level. The waiting period is between levels on each sapling. If you have multiple saplings, you can tend them all every 8 hours.


You get 8 plots for saplings in Jack's Mystree nursery. 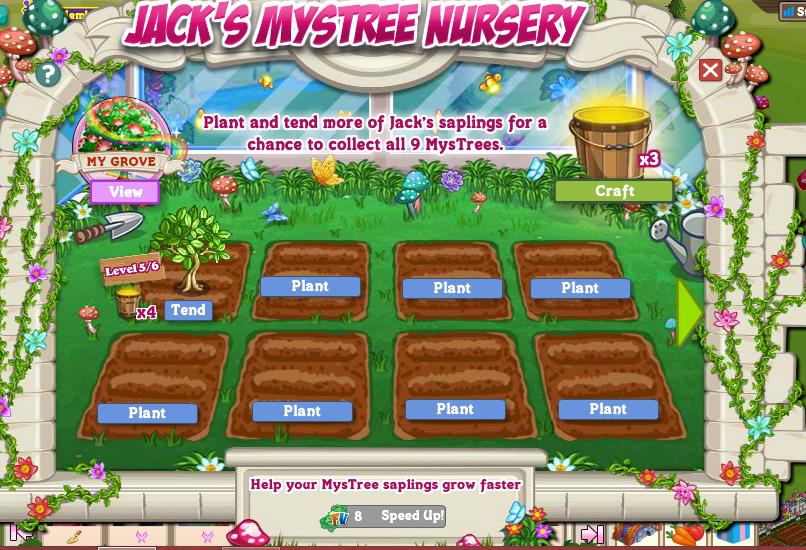 When you complete a sapling you can simply click "plant' to place another in that spot.

If you want additional plots, you can purchase up to 8 more for 20 Farm Cash each. There does not currently appear to be a way to expand to these extra stations with parts. 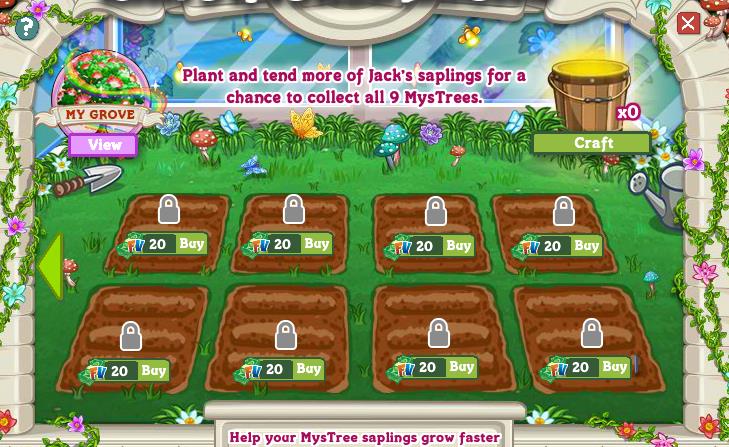 When you finish tending your sapling to stage 6, the button will change from "tend' to "get mystree"

Place the sapling on your farm and watch it transform (each transforms into a random mystree). Some farmers have been experiencing a lot of whoa farmer when placing them. I put mine down and did not touch anything, just watched it transform until it was finished and did not get whoa farmer. If you do, even if you do not click elsewhere, Farmer Susan of our ASK the Dirt Farmer group had a handy tip to refresh before placing. Note you must place the completed mystree on your farm and wait for it to transform  prior to placing it in an orchard. You WILL get whoa farmer if you attempt to place it directly into an orchard. 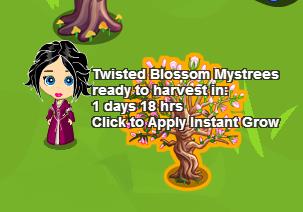 You will then get a pop- up to share Rainbow Butterflies to the feed. 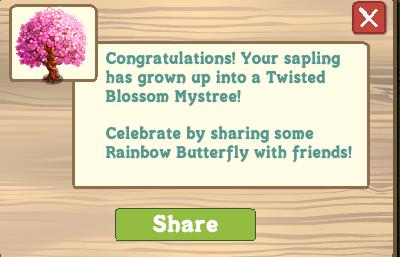 That’s all we have for now.. Stay tuned to the Dirt Farmer for all the latest Farmville news and info..