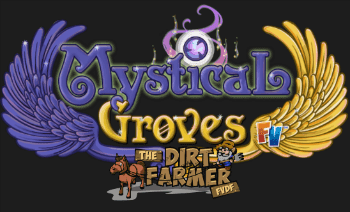 Zynga’s Farmville Mystical Groves like the last several farms, will have a unique harvestable buildable. This time around it will be a 10 stage building called the Destiny Bridge. The building plays off the theme of the farm, light vs. dark. Your Dirt Farmer team has found some images to preview how the building will look through construction. Check out the details below and please do share with friends if you find our post helpful.
For more information and images related to the new farm, kindly check the Dirt Farmer’s Farmville Mystical Groves Complete Farm Guide…

A  look at the stages of the building

Material Parts that will be used in building the Destiny Bridge


Finally a look at the amount of different parts you will need to build and complete the Destiny Bridge.

As you build the Destiny Bridge, you will receive prizes for each stage completed:

In a departure from previous farms, it seems that Zynga has tied the main farm buildable together with image changing aspects of previous features, like the Eversweet Tree. Instead of something to build, you will have two placeable items which will be available in the market for coins (unconfirmed), the Ancient Oak Spirit:

And the Ancient Willow Spirit:

Items that will work with the Ancient Willow Spirit:

There are a couple things of note. These two image changing items appear to have been created to function with the prizes you get from building the Destiny Bridge (see first chart). The exception seems to be the Light Griffon Fledgling, which is available in the market for 15 FC. Further, it appears that all of the items on the right side of the last two charts detailing what works with these, were accidentally coded as actual items in the game. As such, they do not work with the Ancient Oak Spirit or Ancient Willow Spirit. The exception to that is the Light Brio Unicorn. Although it was accidentally coded, it does work with the Ancient Willow Spirit. However, with all of these accidentally coded items, there is no way to obtain them within the game, except possibly asking customer support or growing a foal or fawn in certain cases. This applies to the Light Brio Unicorn as well, despite it working with the image changer.

That's all we have for now… Check back later on this post for more information on the Farmville Mystical Groves Destiny Bridge, as and when it becomes available.