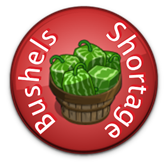 Is crafting your favourite part of the game? Do you need to do more of it for fuel? Are you frustrated by low bushel yields from your crops? Well, we have some tips to help you influence your results and get more of what you need. Check out the details below and do share with friends if you find the post helpful.

First a disclaimer: These tips will influence your results, but are not a guarantee. Bushel production is random and based on statistical probability. Planting 100’s of crops does not guarantee bushels. You can get 100 bushels, or even none from a full field of crops… The same has been stated on the Zynga Community Forums… Bushel production can be influenced, but not guaranteed…
As per Zynga Forums, the below factors affect bushel yields:


Now we will dispel some rumours

Using a bushel when you harvest DOES NOT have any impact on your crop bushel yields.  Using a bushel on an un-mastered crop only grants one extra mastery point per plot per harvest. Using a bushel on a mastered crop gives one extra XP point per harvest. The only impact that using a bushel has on crop bushel yields is to help you master faster. Bushel production does increase with mastery level. This is from the official guide to the Farmer’s Market in the Zynga community forums. The other use for bushels is to unlock a two hour license to plant a crop that is locked to you by level only. (You cannot obtain a free license for a farm cash crop, plant crops on farms where they are locked or unlock a crop with another crop’s mastery as it’s prerequisite in this way ) You can read that guide in it’s entirety here.

For more information on Organic Crops and how to maximize the yield of regular bushels you get from them click here.

As discovered by our answers dude Prashanth, the Jade Falls farm yields bushel at five times the normal rate on other farms, while the Mistletoe Lane & Hawaiian Paradise farm give double the normal rate of bushels. If you are looking for a larger yield on a particular crop, it is wise to plant on one of these farms. 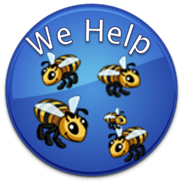 The Beehive is an excellent feature to help boost crop bushel yields. A full beehive can produce pollinated seeds when you harvest fertilized crops on the same farm – so make sure to use fertilize all prior to harvest. Pollinated seeds last for two days and give bushel bonuses to future harvests. You can obtain them by harvesting your own crops or collecting those shared by friends on the feed. You can read the Zynga official guide to beehives here. 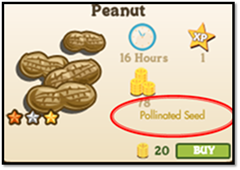 Super crops, which include the Forbidden or Royal versions of other crops, grant the same bushel as the one you must master to unlock them. Their bonus is that they grant those bushels at four times the rate of the original crop. This was also announced officially in the Zynga guide to super crops which you can read here.

What do you think? Did you learn some new tricks to get more bushels from your harvests? For discussion or questions on this or any other Farmville related topic please join us in our discussion group on Facebook Ask The Dirt Farmer
Technorati Tags: Farmville,Zynga,Dirt,Farmer,Bushel,Yield,Crops,Guide,Super